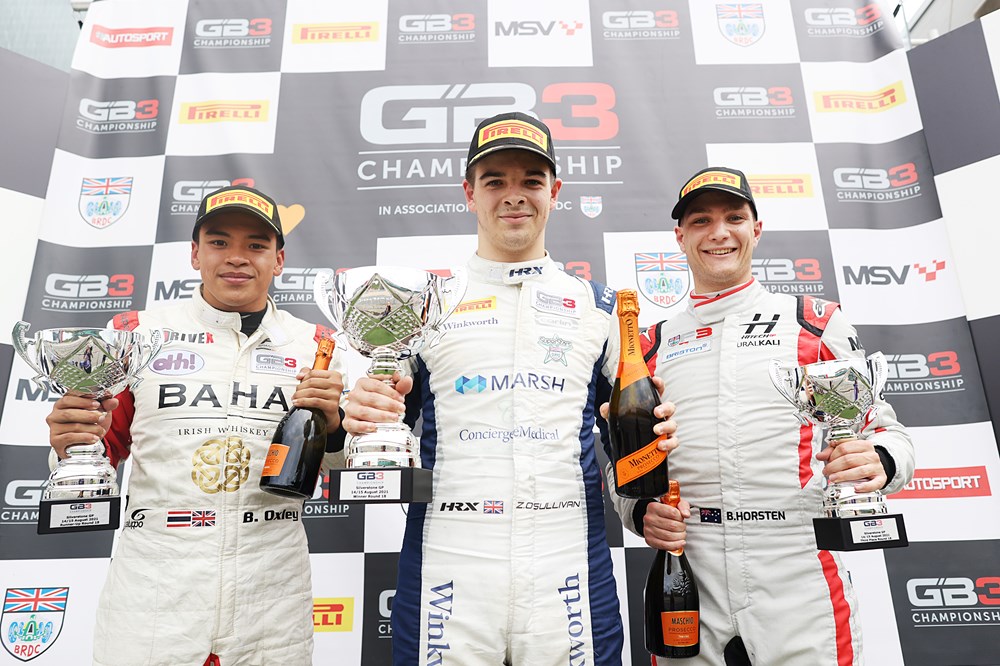 Chris Dittmann Racing’s Ayrton Simmons and Carlin’s Zak O’Sullivan were the two winners in the GB3 Championship, in association with the BRDC, at Silverstone on Sunday.

Simmons claimed his second victory of the weekend and fourth of the year in this morning’s race two, while O’Sullivan avoided drama in race three to claim his fourth win of the season too.

Results across the weekend means O’Sullivan holds a lead of more than 100 points heading to the penultimate event of the year at Oulton Park on 11-12 September.

Race two
Simmons started on pole, with the grid based on each driver’s second fastest lap times from qualifying, while Fortec’s Oliver Bearman started alongside him.

Simmons made the better start from the front row, and built a small lead to the Fortec driver. Bearman was able to close the gap down to under half a second and applied pressure, but Simmons had him covered to win by six tenths of a second, while Bearman secured his first podium of the weekend.

Bearman’s teammate Roberto Faria claimed third, with O’Sullivan fourth. The lead quartet were covered by less than two seconds throughout, and were a long way clear of Hitech GP’s Bart Horsten, who made a last lap overtake on Simmons’ teammate Branden Lee Oxley, who finished sixth.

Race two
The reverse grid race, based on the inverse of the qualifying result, saw Arden’s Roman Bilinski line up at the front of the field alongside Carlin’s Bryce Aron.

Bilinski held his lead on the first lap while Faria shot up to second from fifth on the grid and Oxley moved to third. On lap five of 10, Faria and Bilinski went wheel to wheel through the Maggotts/Becketts complex, with Faria getting a run on Bilinski down the Hangar Straight. The battle ahead allowed Oxley to close on the pair of them, and the trio entered Stowe almost as one.

A collision between the three resulted in Bilinski and Faria retiring from the race, while O’Sullivan, who had kept a watching brief powered into the lead, with Oxley rejoining second. Carlin’s championship leader pulled away to win by eight seconds from Oxley, who was later disqualified for his part in the incident, promoting Horsten to second and his Hitech teammate Sebastian Alvarez to third.

Bearman shot from 14th on the grid to fourth ahead of Elite’s Tom Lebbon, with Reece Ushijima salvaging a difficult weekend with a gain of nine places to finish sixth.

O’Sullivan now holds a 108-point lead at the top of the standings heading to Oulton Park, meaning he could potentially wrap up the championship with a weekend to spare, should results fall his way.

Race two winner Simmons commented: “We saw signs of pace on Thursday and Friday and we just put it all together in qualifying and the races. We were about six tenths behind the Fortec guys on Friday, so we really worked hard overnight to try and turn it around and we did, so I can’t thank the CDR boys enough.

“It was constant pressure. At first I thought they (Bearman & Faria) may have a bit more pace towards the end or I might be a bit quicker in the beginning but once I got into a rhythm and got my head down, I was just focusing purely on what I had to do. I pulled enough of a gap to half break the tow and it was enough.”

Race three winner O’Sullivan commented: “Up until race three it had been a bit of a disaster to be perfectly honest. In qualifying we got quite unlucky with the weather conditions, in fairness so did half the grid! Unfortunately we were the wrong side of it and we had another low score in race one after a bit of contact out of my control. But then a good P4 in race two, and then that last race, we slightly inherited the win but once we got into the lead we really showed the pace. Unfortunately we’ve not been able to properly showcase that until now, and I was able to stretch the gap and get fastest lap. So I’m happy to end on a high and we’ll have to make the first part of the weekend a bit better in the future.

“As for the championship, we’ll wait and see now, no expectations, obviously we keep stretching the lead. It would be nice on my side to be a bit more consistent and we just need to keep on delivering. Our pace is strong and we just need to show it a little bit more.”