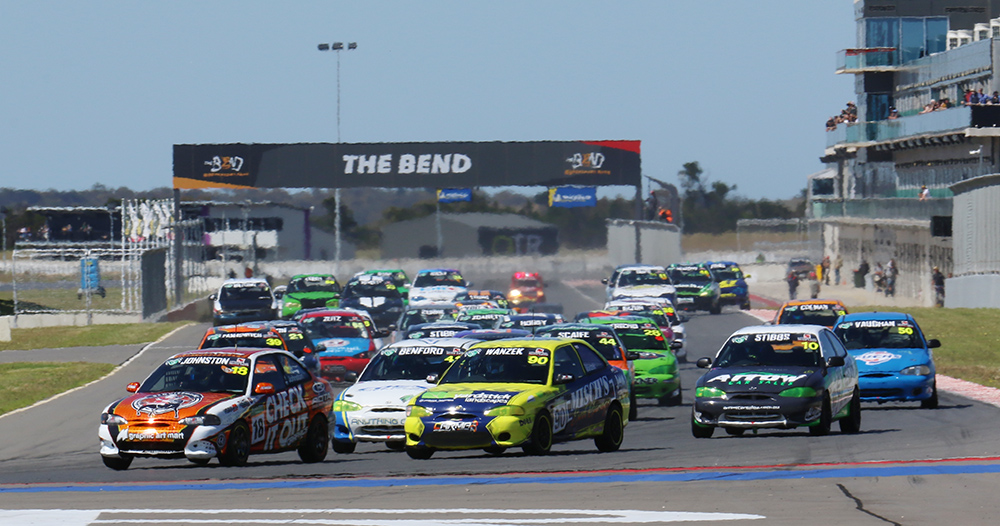 A week after Supercars visited The Bend Motorsport Park, State Championship racing makes its assault on the West circuit for round 2 of the Sporting Car Club of SA series this weekend.

The two-day event will see over 120 cars compete on the shorter configuration that last hosted the excelraceparts.com.au enduro in December last year.

A strong field of 41 Circuit Excels will battle it out through qualifying and five races across the event brought to you by Sthil Shop Mount Barker with Shaun Pannowitch currently leading the championship over teammate and 2020 champion, Asher Johnston, will be keen to retain the number one on his car.

It has been a busy few weeks for the Check it Out Racing Crew having revealed another striking livery on their race winning machine sponsored by Hofbrau Original Lager. Others to reveal new colours since round 1 include Riley Matheson from Misch’s Excel Garage who added some personality with Looney Tunes character, Road Runner, featuring on the side of his car. Riley saying, “Scope Imagery went wild with the idea to incorporate part of my nickname in the design.” Anticipation awaits until front runner, Mitchell McGarry unveils his new colours at the event which is based off a popular supercars design.

Motorsport Australia Future Star recipient, Jayden Wanzek, will be looking to return to form at the front after struggling to unlock speed in his new car at Mallala last round. The Bend was a breakout success for Wanzek in 2020 where he claimed his first ever victory in the category. Others looking to move up the field include Ethan Fitzgerald who was just shy of finishing inside the top 10 at Mallala and talented Victorian, Joel Johnson, driving one of three Lonsdale Auto Service Centre supported cars.

Greg Stuut’s busy month of motorsport continues as he switches from dirt to tarmac having competed alongside his wife Sandi in the Rally of the Heartland through Burra last weekend.

Scott Matheson, older brother of Riley makes his debut in the recognisable Hi-Tec Oils car belonging to Misch Nowickyj. Misch raced at Bathurst early this year at the 6-Hour Easter Festival where the car suffered substantial damage to the rear end. With assistance from series supporter, Evolution Crash Repairs, the car is back in business and so is Scott having not competed since karts 5 years ago. He will join series regulars from the Currie, Stibbs and Hinks family in the fight for bragging rights at The Bend.

Schedule and event results can be found on the Circuit Excel Facebook page throughout the weekend.  https://www.facebook.com/circuitexcelsa.com.au