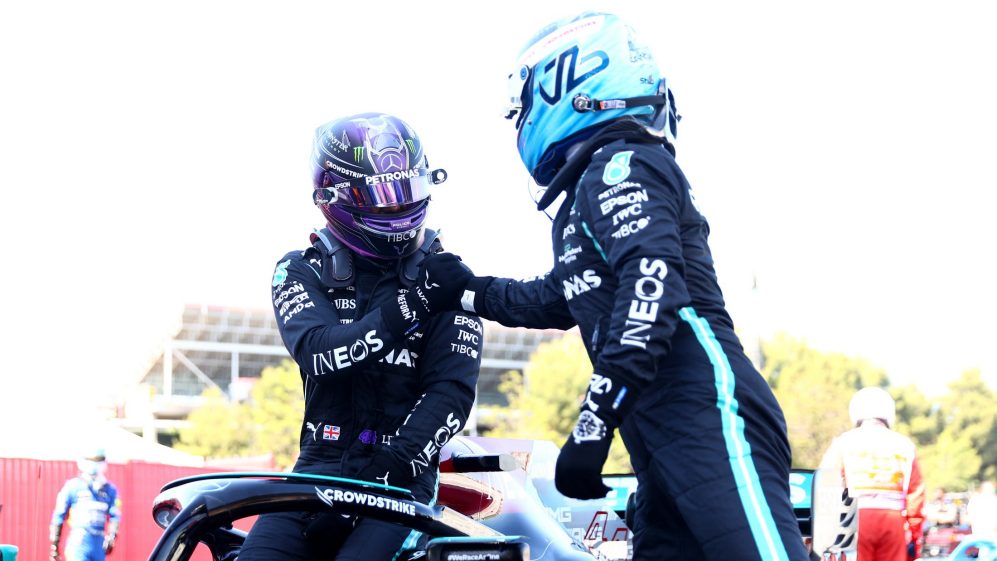 Qualifying for the 2021 Spanish Grand Prix produced mixed results throughout the field. From Lewis Hamilton upstaging Max Verstappen to score his 100th Pole Position, to Yuki Tsunoda complaining of inferior equipment after dropping out in Q1, there were tales of wins and woes everywhere.

Lando Norris was compelled to run a second set of soft tyres in Q1 after his first run was impeded by Nikita Mazepin. Having let two cars pass, Mazepin moved back onto the racing line as Norris approached on his flying lap. Already under heavy criticism for his involvement in a number of incidents in the opening 3 rounds of the 2021 World Championship, this latest episode saw the Haas driver issued a penalty point on his licence and a grid penalty for the race, even though he was already the slowest qualifier for Sunday’s race. Norris’ attack in Q3 was subsequently hampered as he had consumed two sets of softs in the first stage of qualifying and the team later reported damage to the floor of his McLaren had affected his times in the second stage of Q3. 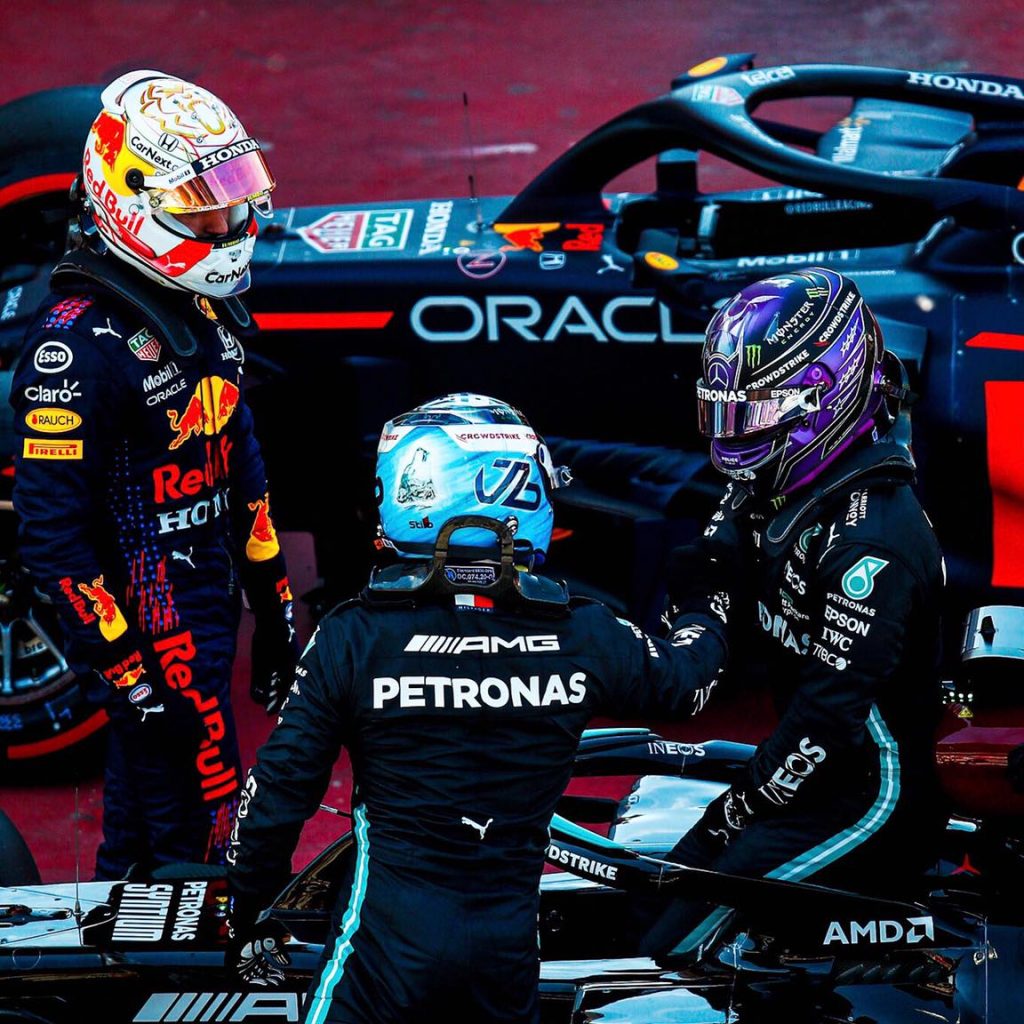 “Not a perfect qualifying today,” Norris explained to McLaren Media. “We were quite unlucky with some traffic in Q1 run one, so that put us on the back foot as we needed to use a second set of tyres when we should’ve been safe. I picked up some damage after my first run in Q3, and the final run wasn’t clean either, which was quite important in the end with how much the track was evolving and the wind was changing. I’m not too disappointed, but it is a bit frustrating to start from the position we’re in as it’s a very difficult race to come through and overtake. We know we have a strong car on a Sunday, so we’ll do our best to get some good points.”

Daniel Ricciardo had some cause for celebration as he ended Q3 two places ahead of Norris. Ricciardo’s time of 1.17.622 was 3/10ths of a second better than Norris and less than a second slower than Lewis Hamilton on pole. 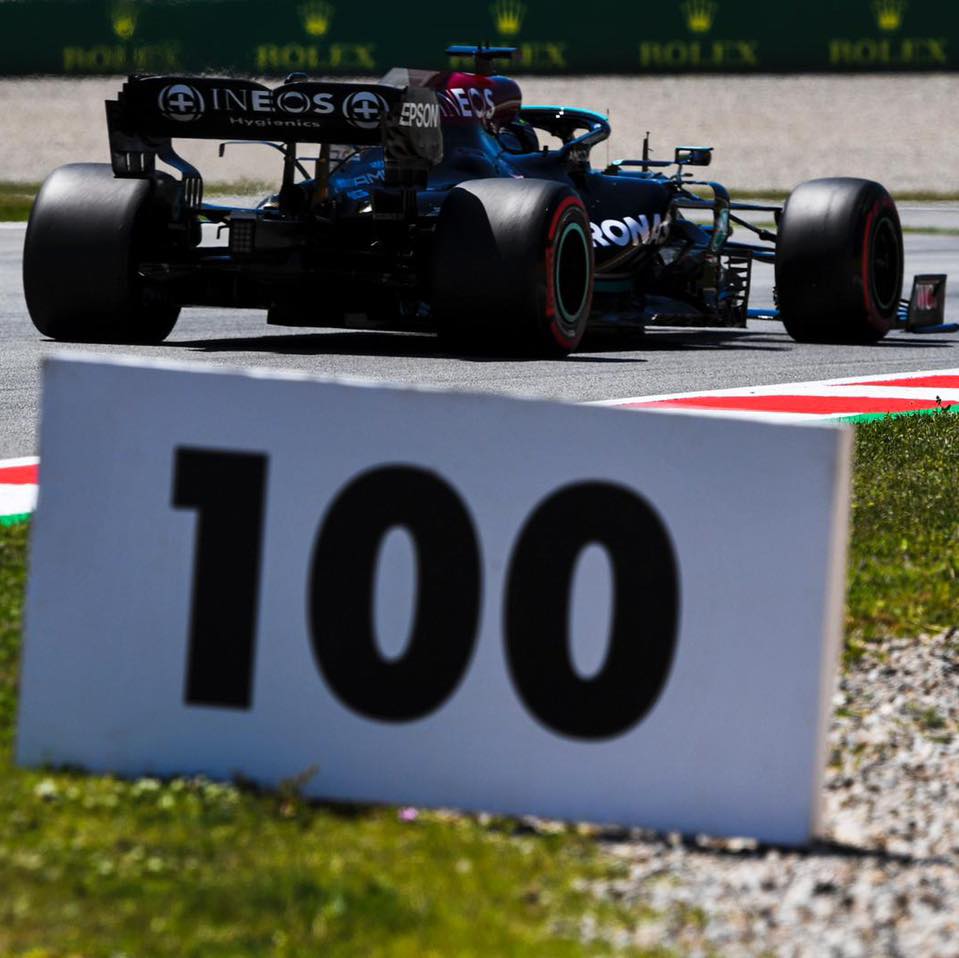 It was all smiles at Mercedes-AMG Petronas as Lewis Hamilton pipped Verstappen to record his 100th Formula One career pole position, while Valtteri Bottas finished 3rd. This means that both Mercedes will start the Grand Prix from the grippier part of the track.

“I was behind the whole way through qualifying and making small tweaks to find pace,” Lewis Hamilton said to Mercedes-AMG Petronas Media. “I just can’t believe we’re at 100 – it’s down to the women and men back at the factory who are continuously raising the bar and never giving up. It’s a dream to work with them, what a journey! Who would have thought when we started out together at the end of 2012 that we’d be celebrating 100 poles!? I feel so humbled and very grateful for all their work. It feels just like my first! I’ll always remember that one.”

Toto Wolff, was one of the first to congratulate Lewis on the milestone. The result was Mercedes-AMG Petronas F1s 129th Grand Prix pole position, which moved the team past Williams into 3rd place amongst all-time poles per team.

“I’m not one for statistics but 100 pole positions is a pretty impressive milestone! I told Lewis on the radio that it was quite an okay lap, but of course it was a little bit more than that,” said Toto Wolff to Mercedes-AMG Petronas Media. “It looked like Max and Red Bull had a big advantage in Q2, but we kept chipping away at it and in the end, the top three drivers were covered by a tenth of a second; exactly how we want it to be in F1, battling for every thousandth of a second.”

Tsunoda, Raikkonen, Scumacher, Latifi and Mazepin were eliminated in Q1, with Tsunoda clearly disappointed with the AlphaTauri. He made his feelings clear at the end of the session, but later backed away from those accusations.

“I don’t know. It is always different feedback compared to my team-mate. At times, it is the opposite”, Tsunoda said at the conclusion of Q1. “I have a bit of a question if it is the same car… of course, it is the same but you cannot tell why the car is so different. Maybe it is just the driving style but I don’t know why I am struggling this much.”

Tsunoda later apologised via his social media channels. On Twitter he wrote: “I wanted to apologize for my comments today. I didn’t mean to criticise the team who have done a great job all weekend. I was just frustrated with my performance.”

LEAD THE CHARGE: ONE SEASON, YOUR CAREER IN POLE POSITION