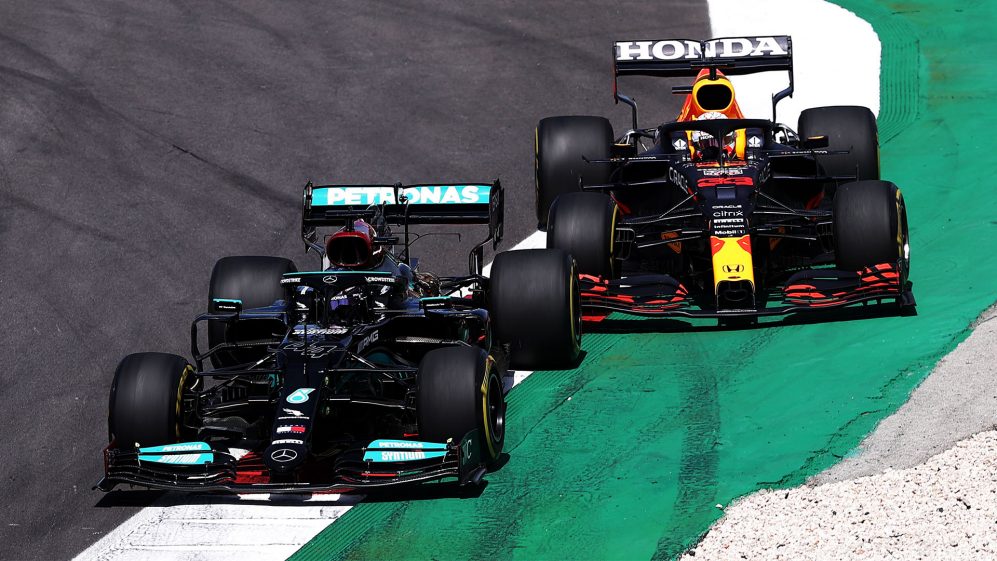 Lewis Hamilton has won the Portuguese Grand Prix with Valtteri Bottas 3rd. Max Verstappen managed to split the Mercedes pair in his Red Bull Honda as the battle for the championship appears, at this stage, to be a rather intriguing arm wrestle between the two dominant F1 teams of the past decade.

As the lights went out it was Bottas who led Hamilton and Verstappen into Turn 1. Carlos Sainz moved ahead of Sergio Perez for 4th and a fast starting Lando Norris leapfrogged Esteban Ocon’s Alpine for 6th. Ocon reclaimed the position a few corners later as teammate Fernando Alonso locked a brake and ran off the circuit at the same time. The opening lap was somewhat of a compromise as those on the medium tyres, such as Perez, came under attack from those who had started on the softer compound.

Norris once again attacked and demoted Ocon to 7th before the completion of the opening lap. Daniel Ricciardo was also on a charge as he moved into 14th, immediately behind Raikkonen and Giovinazzi. It gave him a birdseye view of the contact that occurred between the Alfa Romeo teammates on lap 2.

Raikkonen followed his teammate down the main straight and benefitted from a substantial slipstream, far more than Kimi had expected. He veered to the left as he rapidly descended upon Giovinazzi and clipped the rear wheel of his teammate. The impact broke the front wing and nose of Raikkonen’s car and became wedged under the front wheels. Raikkonen slid off the circuit and into the gravel at Turn 1 while Giovinazzi continued back to the pits with a damaged left rear tyre.

A full course yellow was issued and the Safety Car dispatched for 5 laps as the Alfa Romeo was removed. Bottas led from Hamilton, Verstappen, Sainz and Perez as the race resumed. Verstappen pounced on Hamilton at Turn 1 for second, with both drivers going close to the extremities of the track limits, while Lando Norris charged into 4th passing both Sainz and then Perez.

A small error by Verstappen at Turn 14 enabled Hamilton to take back 2nd place under brakes for Turn 1 on lap 11.  Daniel Ricciardo’s recovery mission saw him move into the points on lap 18, using the DRS to displace Sebastian Vettel from 10th. Hamilton had also closed on race leader Bottas and took the lead on lap 20 with a sweeping move around the outside of his teammate at Turn 1.

Red Bull Honda gambled on the undercut when they pitted Verstappen as the first amongst the leaders for tyres on lap 36. Bottas was told to push by his engineer in response before his pitstop on the following lap. Bottas returned to the track ahead of Verstappen but was unable to keep the Red Bull Honda behind as he struggled for grip on cold tyres. The Dutch driver set up a move and took 2nd with the inside line into Turn 5.

Ricciardo’s move to McLaren in 2021 came under some scrutiny was the Australian struggled with his hew ride, coupled with the tense battle between McLaren and Alpine, his former team (albeit in the guise of Renault). His weekend was not helped when Fernando Alonso passed him for 9th place on lap 51. Alonso then Sainz for 8th as the Ferrari struggled for speed in the final laps of the race.

Lewis Hamilton eased away to a 29 second victory over Verstappen and Bottas. Perez, Norris, Leclerc, Ocon, Alonso, Ricciardo and Gasly completed the top 10.

“That was such a tough race, physically and mentally, just keeping everything together,” Lewis Hamilton said to Mercedes-AMG Petronas Media.  “It was very windy out there, obviously, so it was easy to put a foot wrong. I didn’t quite get as good a start as Valtteri, then lost out on the restart which was not good. I was not happy about that, naturally. But that race was satisfying, when you’re in third and have to overtake two amazing drivers – amazing!

Having races like that is what I live for. The gap between us all is so close and every single point is going to count this year. I love the battle,I’ve loved it since my days in karting and as a team, we can’t leave any stone unturned – we’ve got to continue to push this car, squeeze everything out of it.”

Max Verstappen was pleased with the result, comfortable in the knowledge that the circuit was not ideal for the Red Bull Honda.

“Something about this track really does not suit our car and I think in general this was a bit of an off weekend in terms of grip and overall pace,” Verstappen told Red Bull Media. “We knew last year that we weren’t particularly strong here, so this year has been a bit better and we managed to finish ahead of one Mercedes, but it wasn’t quite good enough to get them both. Nevertheless, second is still a pretty good result and we always knew this season would be up and down in terms of the tracks we were strong at and the ones Mercedes were.Towards the end of the race Valtteri was even coming back at me which showed their pace today. It’s a shame the Fastest Lap got taken away, stupid track limits, they should just put gravel back! It is what it is.”

Daniel Ricciardo was also somewhat pleased with another points scoring finish after his struggles during qualifying the previous day.

“Today was certainly a better day,” Ricciardo told McLaren Media. “I was able to do what I set out to do and overtake some cars, have some battles and get rid of some anger from yesterday, so that was good. I think there were moments of the race that were really positive and having got another race distance under me, I feel like I’ve got quite a bit of feedback for the team. I definitely feel some things which are holding me back in terms of what I want to do with the car, and every time I try it, it doesn’t quite hold on. So, I think there are some things we can immediately address with the set-up, and then with some updates to come. Overall, I’m pretty optimistic with how the race went, thanks again to the team at track and in Woking for their support and hard work this weekend. I’m already looking forward to Spain in a few days’ time.”