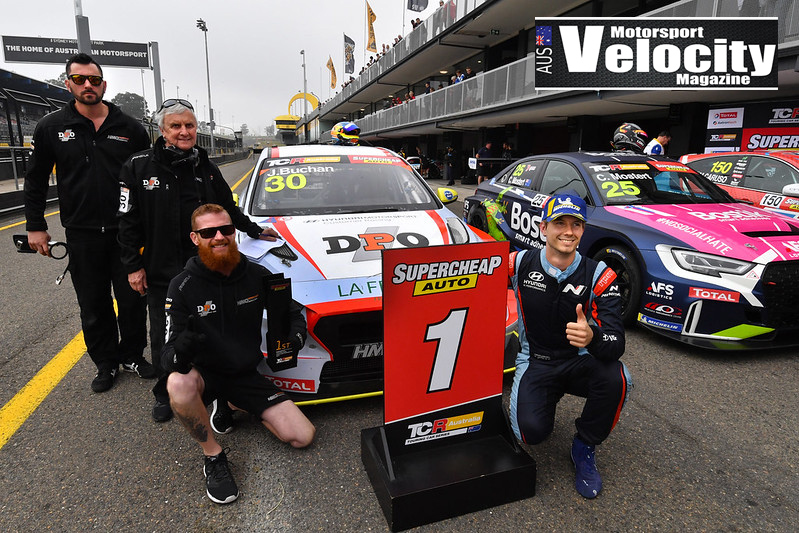 HMO Customer Racing scored a second race win and a double podium in what was a case of ‘mission accomplished for the team’s home round.

Two race wins for Josh Buchan, coupled with podium places for both Nathan Morcom and Buchan in the final race were the perfect tonic to ‘kick start’ the second half of the season for HMO Customer Racing.

Josh Buchan led race 2 from flag to flag. He was unchallenged from the start when James Moffat was slow off the line and the #30 HMO Customer Racing Hyundai i30 N TCR was quick to capitalise in establishing a gap to those behind. Chaz Mostert began to close during the latter stages of the race, but Buchan remained calm as he recorded a second win in the 2021 Supercheap Auto TCR Australia Series. 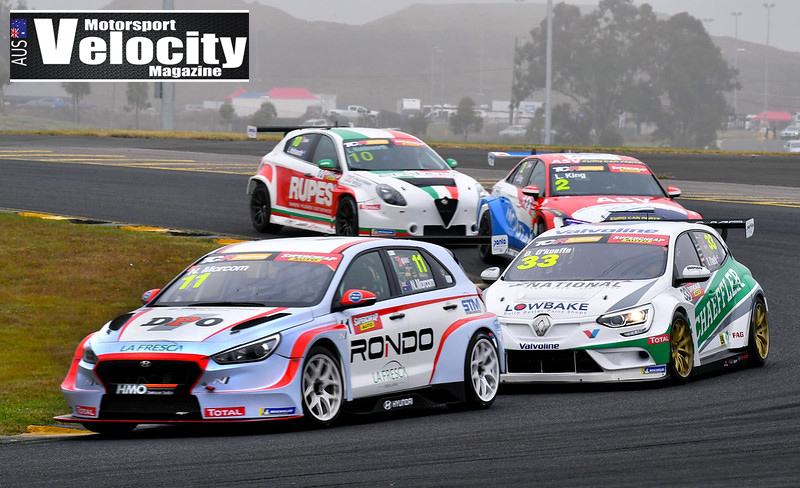 Nathan Morcom had a better start to race 2, but lost momentum when he had to swerve left to avoid the slow moving Peugeot of James Moffat. Morcom dropped a place as he came under from attack from the Renault Meganes of Moffat and Dylan O’Keeffe. Morcom also survived a brush with Aaron Cameron as he passed the Valvoline Peugeot which slewed the #11 Hyundai i30 N TCR sideways as Morcom fought to keep the car under control. He took 4th place at the chequered flag.

Duvashen Padayachee made a strong start to race 2 and looked to improve on his early race pace. A wild moment into Turn 15 on the opening lap cost Duvashen a position, while another moment a short time later saw the #130 HMO Customer Racing Hyundai i30 N TCR drop to the tail of the field. Padayachee fought back to 17th at the finish.

Josh Buchan’s hopes of a three-peat at Sydney Motorsport Park were dashed by the combination of a fast starting Alfa Romeo and two lengthy Safety Car periods. Both Josh and Nathan had saved their best rubber for the final race with the intent of moving ahead during the latter stages of the race. Unfortunately, the two caution periods ultimately decided the race. Morcom dropped to 4th as the race returned to green flag conditions and was unable to mount a challenge by the time the chequered flags flew. O’Keeffe had been too quick to pass at the race resumption and was handed a 5 second post-race penalty for an infringement that elevated Morcom to 3rd.

Duvashen Padayachee was caught up in the opening lap melee and dropped back towards the rear of the pack. Any chance of a fightback for the #130 was then extinguished by the Safety Car periods that followed.

Josh Buchan has jumped to 3rd in the Championship on 335 points. Nathan Morcom moved to 4th with 327 points.

The Supercheap Auto TCR Australia Series heads to Morgan Park Raceway in Queensland for the penultimate round of the 2021 season from 25 to 27 June.

“We started Race 2 this morning in 5th, lost a place off the start and then had to hustle my way back there. I then had a great battle with Tony D’Alberto and Michael Caruso for the rest of the race. By the I moved ahead of Tony there wasn’t enough laps left to catch Caruso and get onto the podium.

The team was optimistic for a good result Race 3 as we had saved the best tyres for last and it paid off somewhat. I had a mega start off the line and moved behind Josh in 3rd. It was a pity that the Safety Car then intervened as we were well prepared for the journey and a win wasn’t beyond the realms of possibility.

At the restart I had nothing in straight-line speed and O’Keeffe just drove past. It was rather fortunate for me that he made the move before the control line, which is a no-no in our
racing. The 5 second penalty that he was issued guaranteed our place on the podium.

Finishing the weekend with a podium was important for myself and the boys in the team. A good haul of points was also welcome as we try to nail that last little piece of the set-up puzzle and get everything possible out of the car. I’ll happily take that 3rd place because we deserved to be there in that last race.

The boys did a fantastic job all weekend and I am looking forward to the next round at Morgan Park. ”

“I went into race 2 as a winner in TCR, so there was an added pressure. At the same time there was also that relief in getting the first win and the monkey off my back. It was nice to get a good start and move out in front, which is where I like to be.

I saw Chaz Mostert in my mirrors and tried to control the gap as best I could. He had a big push mid-race but I managed to hold on. I know what to do when I am out in front, concentrate on my apexes and being consistent with my pace. It’s a mind game that I play with
myself.

I tried not to think too much about it being Chaz Mostert in my mirrors. While I have the
utmost respect for Chaz and his achievements, at that moment in time it’s just another name on the window.

To have him racing me like he did was still pretty surreal, but you can’t let that cloud your concentration during the course of a race. I still remember and admire his victory in the Bathurst 1000. I’ve got a lot of respect for him and he was really good to me this weekend, with some words before the first race. Yeah, I’ve nothing but respect for Chaz.

We’ve had a pretty good race car all weekend after he has had the benefit of the best car at previous rounds, so it was nice to give him a bit of a dose of his own medicine.

Race 3 was really a bit of a non-event in terms of laps. Caruso jumped up beside me off the start and made a great move happen up the inside. He put his car in a position that I really couldn’t defend and then off he went. Fair play to him, he did a really good job and stayed in front until the end.”

“Race 2 started really well and then I got pushed off the track when running around the edge of the top 10. My recovery was really good with some lap times within a few tenths of the leaders. I’m slowly getting my head on top of these cars and both Josh and Nathan have been great in their advice over the weekend. I learn a little from them each session and
continue to make progress, it’s just a time thing now.

I really look forward to another run in the Hyundai i30 N TCR and Morgan Park is still a possibility for us, though the timing is not great for me. Sandown is probably the most likely option at this stage, but we will see what happens.”