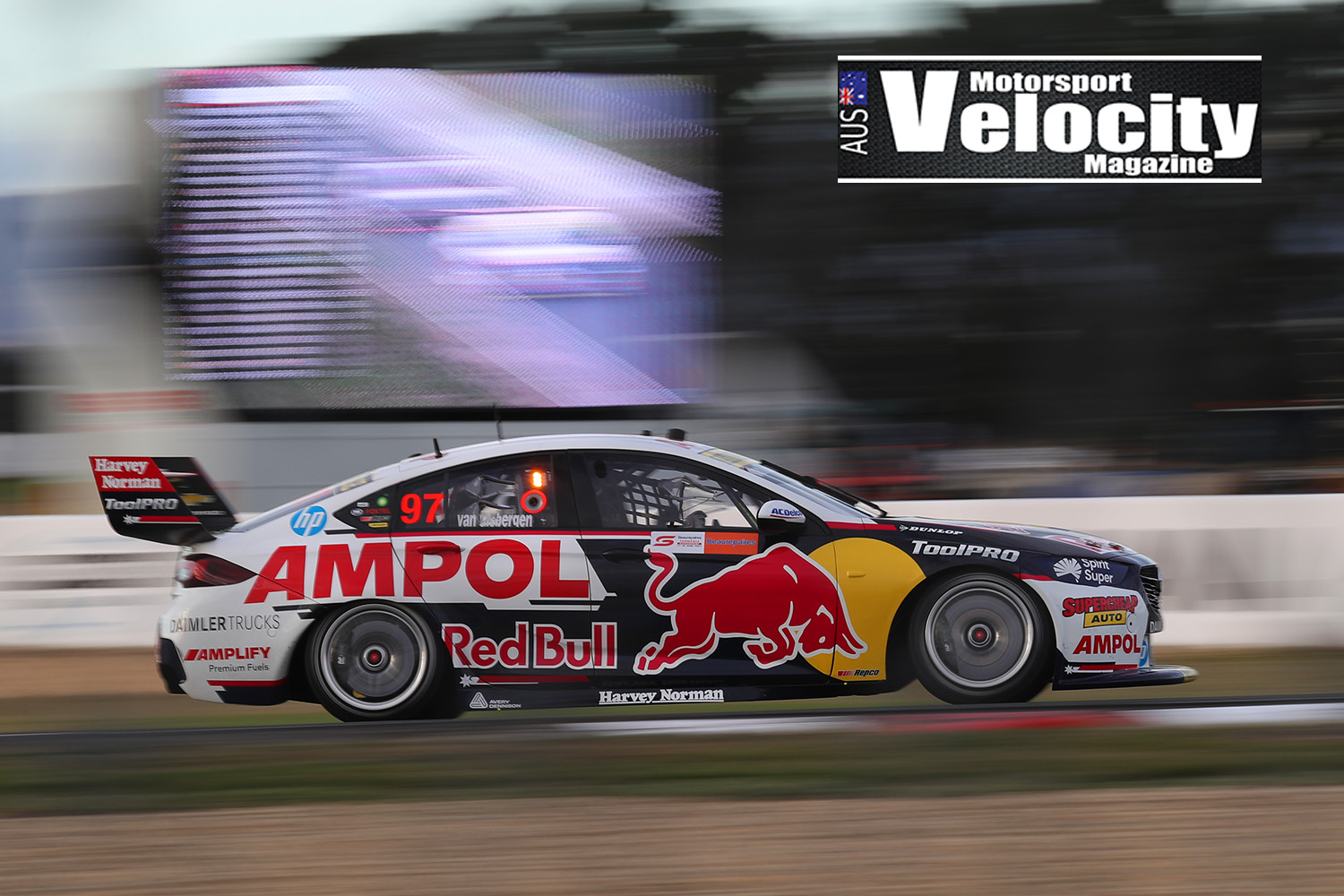 Having lost the lead at the start of the race, van Gisbergen bided his time in second before taking the lead inside 10 laps and then cruised away from the field. Jamie Whincup made it a 1-2 for the Red Bull Ampol Racing Team, while Anton De Pasquale claimed 3rd for the Shell V-Power Racing Team.

Van Gisbergen started from pole position with Cameron Waters alongside. Chaz. Mostert and Jamie Whincup shared the second row of the grid from Will Davison, Scott Pye, Anton De Pasquale, Mark Winterbottom, Will Brown and David Reynolds completed the top 10.

As the race began it was Cameron Waters who jumped into the lead, with van Gisbergen dropped momentarily to third by teammate Whincup before regaining a place at turn 6. Davison and Mostert also traded places between the hairpin and turn 6, with the Shell V-Power Mustang demoted back to 5th as the first lap drew to a close. Nick Percat’s day had not gone to plan with the BJR driver well down the order and then found the wall at the hairpin during the opening laps. He returned to the garage under his own momentum for repairs and returned to the track on lap 11. 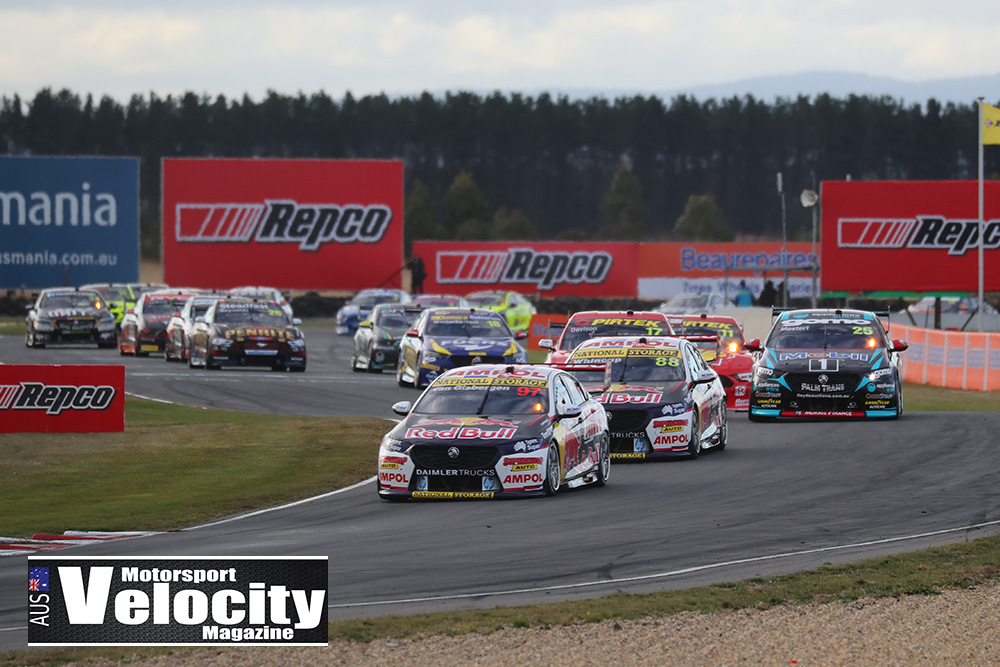 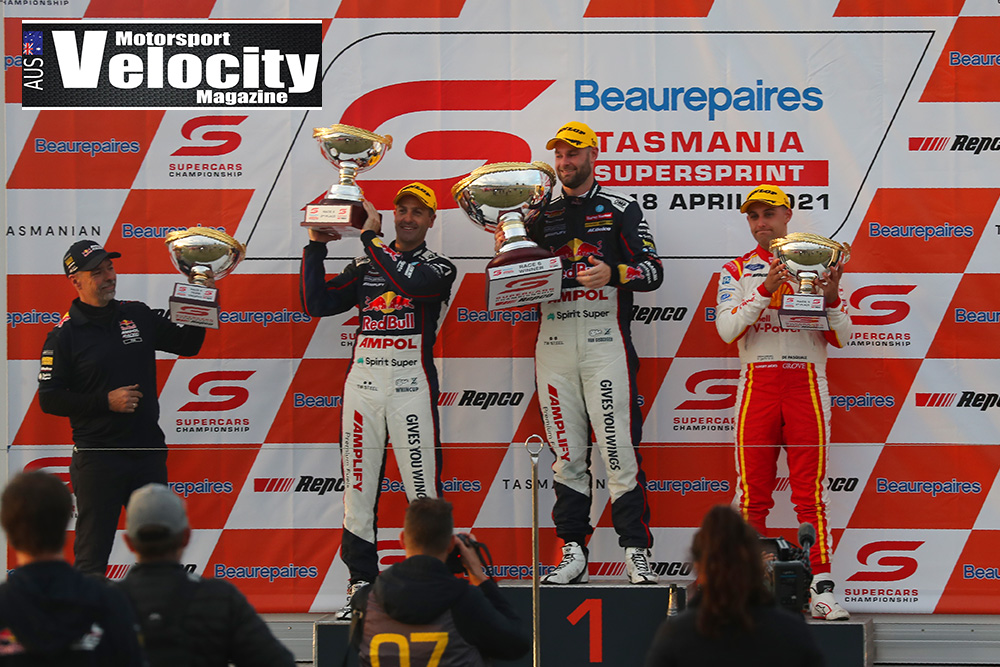 The field remained fairly static during the first portion of the race, with Jack Le Brocq and Bryce Fullwood having made the most progress throughout the field. Le Brocq had climbed 4 places to 12th and Fullwood 5 positions after starting near the rear of the grid. Shane van Gisbergen took the lead of the race with a late move to the inside of Waters at turn 6 on lap 9.

Will Davison led the pit stop sequence when he came in to complete the compulsory tyre change at the end of lap 12. By lap 13 van Gisbergen had cleared out to a 1.8 second lead, while Waters fell into the clutches of Whincup and Mostert and dropped two position when the pair out-braked him into turn 6. Whincup made his stop on lap 18 and resumed in 17th position.

Waters stopped on lap 22 and fell back behind the two Shell V-Power Mustangs in 16th, the Tickford mechanics changed the right side tyres in what was a different strategies to those who had stopped before him. Mostert followed suit a lap later and also dropped behind De Pasquale and Davison on his return to the circuit. Shane van Gisbergen pitted a lap later and resumed comfortably ahead of teammate Whincup.

Turn 6 proved to be the best overtaking point across the circuit when Mostert took advantage of fresher tyres to move past Davison for 10th on lap 29. Mostert closed on third placed De Pasquale but was unable to clinch a spot on the podium. Shane van Gisbergen eased away to a 4 second victory over Jamie Whincup and Anton De Pasquale.

“Yeah it was a bad one,” Shane van Gisbergen said of his race start to Seven Sport. “Then Jamie pulled a nice move and got me. Did some big bombs at the end of the straight and got them back. That was fun racing at the start the just tried to build a gap so we could manage it. We burnt up our rears which puts us in a bit of a spot for tomorrow, but our car is awesome. It’s really cool to be a part of it.”