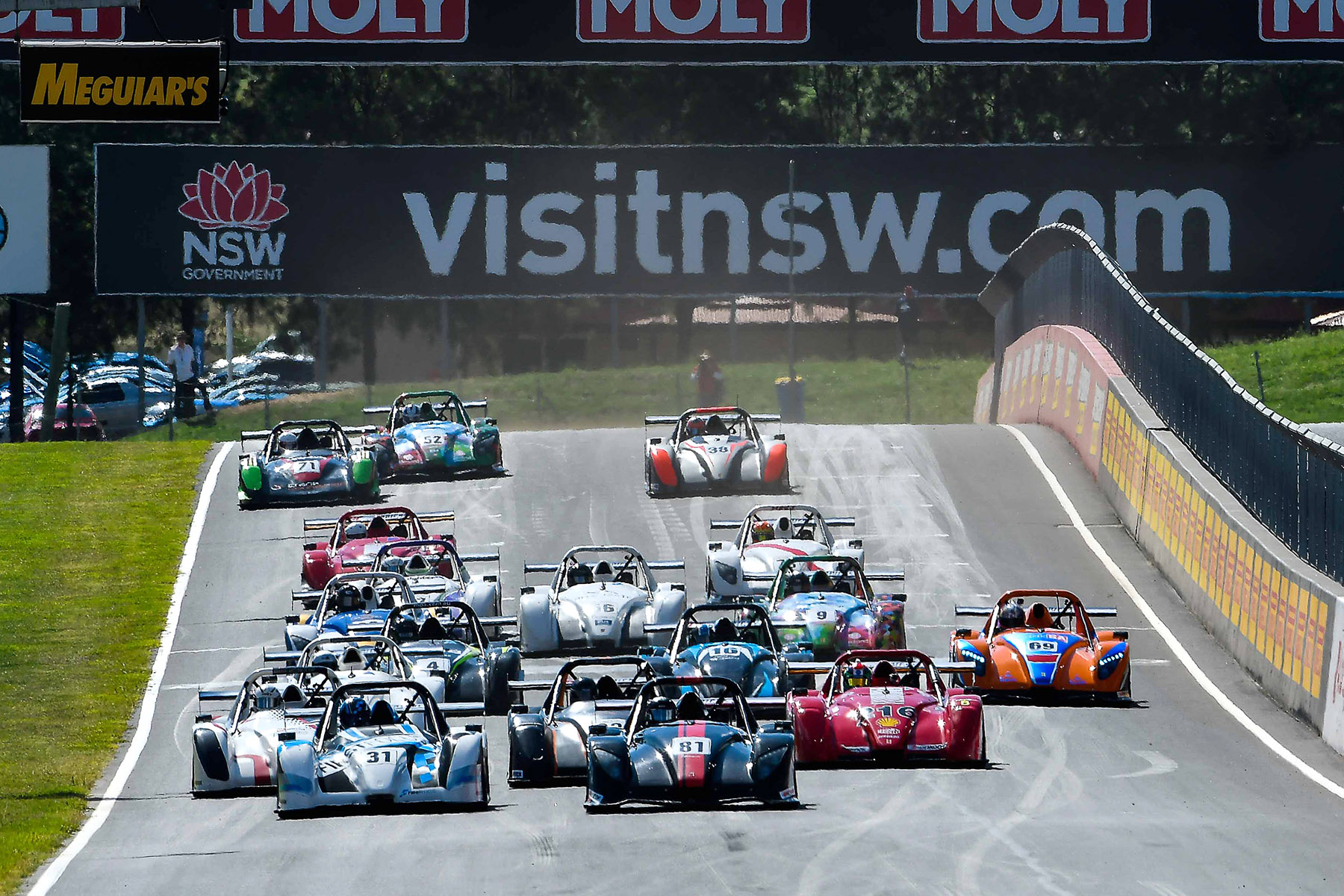 After a short program in 2020 that saw just a single event at Sydney Motorsport Park 12 months ago, the dynamic RA Cup will return to Bathurst’s Mount Panorama this Easter for the opening round of the 2021 season, the sixth time the iconic circuit has played host to the mighty open-top sportscars in the 13th season of the Cup.

Despite the ongoing affects of the pandemic, a strong field of entries has joined the program at Mount Panorama led by 2019 champion Chris Perini and Bathurst specialist Peter Paddon, whilst former SR8 race winner and RA Cup champion Neale Muston also makes a welcome return to Mount Panorama in his thundering SR8.

Typically the Cup has started the new season at Bathurst alongside the annual 12-Hour, but the move away from that event this year saw the popular Sportscar category move to the Bathurst 6-Hour event with two races scheduled across the three days, including practice and qualifying on Friday.

Track time is limited – as it has been in past seasons at Bathurst due to the heavy schedule with the ARG-run event – which will provide the experienced campaigners with a great opportunity to put their previous laps on the iconic 6.213-kilometre circuit to good use, although for many competitors the return to Bathurst will be their first competitive laps in more than 12 months and a chance to blow out the cobwebs!

With three-time champion – and the most successful SR3 driver in the history of the sport at Bathurst – Peter Paddon, and 2019 champion Chris Perini renewing their great rivalry, fans will have plenty to keep them entertained across the course of the event, but there will be a number of great storylines to keep the most ardent fan occupied.

SR3 lap record holder Brad Shiels returns, this time driving for Tilton Racing for whom he contests TCR Australia, the Bathurst local is a real specialist at Bathurst and expected to push the series favourites, a moniker which he is truly capable of adopting, although his status as a professional driver will also see him stationary during the compulsory pit stops for longer than many of his rivals, something which will also slow the progress of former winner (and three-time champion) Neale Muston in his SR8.

“We’ve opened up the category this year in an effort to attract Radical owners who through circumstance may have fallen outside of the past criteria to compete in the RA Cup,” Motorsport Manager Karl Reindler explained.

“It’s always been a challenge to have to return engines to the country of manufacture – in this case the UK – in order to conform with the previous regulations, and with the challenge of the pandemic and the sheer time involved in that process just made no sense, so that’s why we made the move.”

Early indications were that a number of SR8 entries would make their way to the mountain where the top competitors are able to push lap times within three seconds of the top Supercar drivers, however the ongoing challenges of the pandemic ultimately held back a few drivers due to Easter commitments, but the expectation is that we will see more of those entries throughout the year although the SR3 Cup competitors will still be the title contenders.

“The cars that have been regulated to run the Cup in past seasons will continue their battle for the 2021 championship,” Reinder added. “The entries that fall outside of the previous regulations will form the ‘Invitational’ category, but to make it interesting for everyone, we will adopt relevant pit stop compensation times during our compulsory mid-race stops to ensure that we ‘equalise’ the field over the course of the race forcing the faster SR8 cars – which will stop longer due to their outright pace – to have to work their way back through the field.”

Aside from the likely outright contenders and former champions, there are a number of returning Radical competitors as well as some new faces to the Cup.

History would suggest that Peter Paddon will continue his successes at Bathurst, the Sydney-based GWR/First Focus driver having claimed eight wins in the SR3 category in the 10 races he has contested since 2015, Perini meanwhile is yet to lay claim to a Bathurst victory despite leading during the 2019 races and setting pole the same year, Muston too a multiple race winner in an SR8 on the mountain.

Friday’s two sessions will include 30-minutes for practice followed later in the day by 30-minutes of qualifying, with the opening race set for 3:50pm Saturday afternoon before a quick turnaround to Sunday’s race with an early start at 7:05am.

The Bathurst event will also see some changes in the structure of the operations of the category with former Australian GT Category Administrator Kate Harrington joining the team alongside Motorsport Series Manager Karl Reindler to assist in the day-to-day running of the RA Cup this season, her past experiences invaluable in taking the sport forward in season 2021.

Saturday’s race is expected to be streamed LIVE, with details released closer to the event on the RA CUP Australia Facebook page; www.facebook.com/RACUPAUS