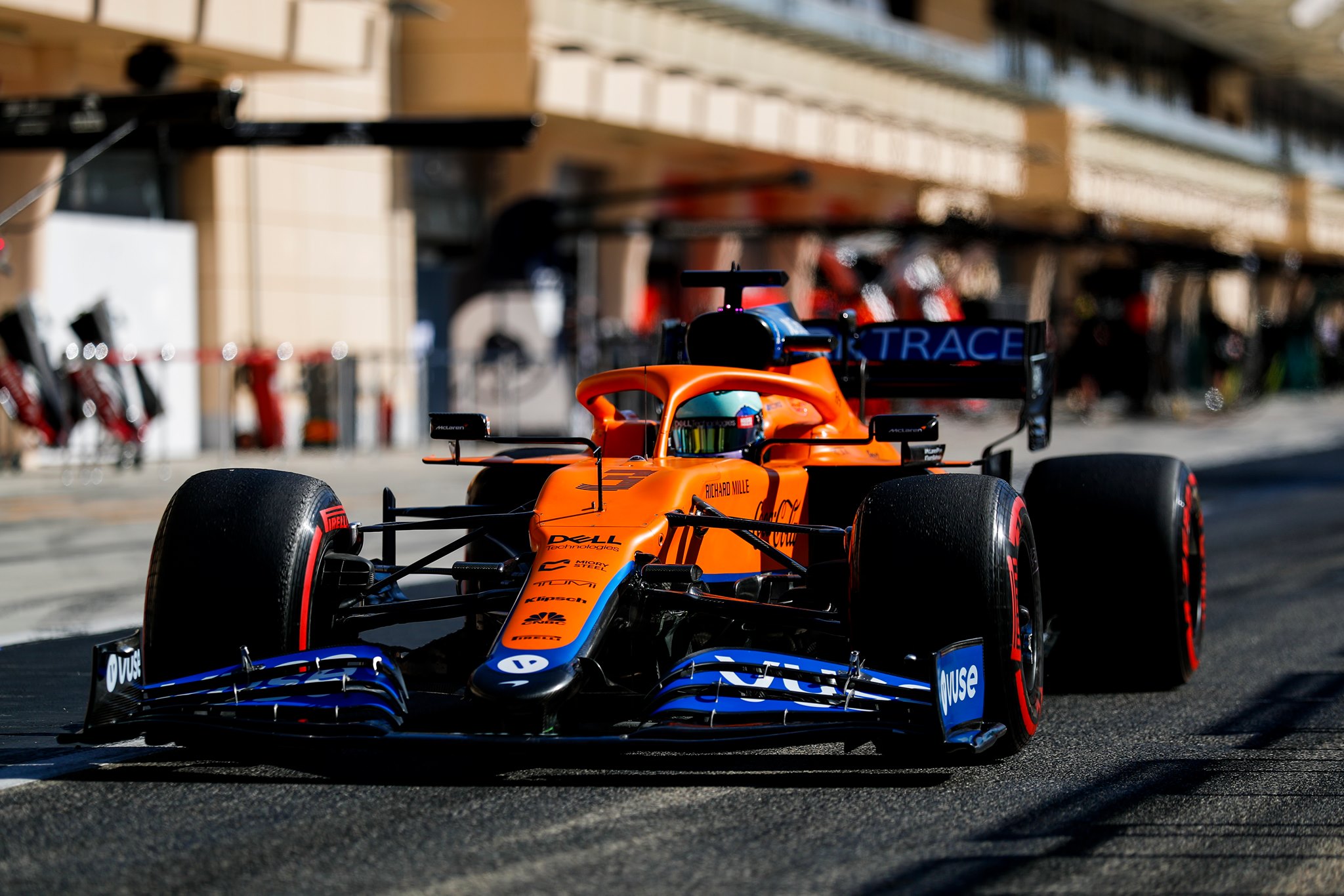 Everything you need to know for the Bahrain Grand Prix from the McLaren team.

A new Formula 1 season is finally upon us. The return of the sport we love is a welcome shot in the arm; a fillip for souls that have endured a winter of lockdown monotony and that crave wheel-to-wheel heroics of the highest order. The start of a new campaign does not just signal the return of something we hold dear to our hearts, it’s about more than that: F1 gives each and every one of us a profound sense of belonging. It is, after all, our sport and, if you’re reading this, McLaren is almost certainly your team. 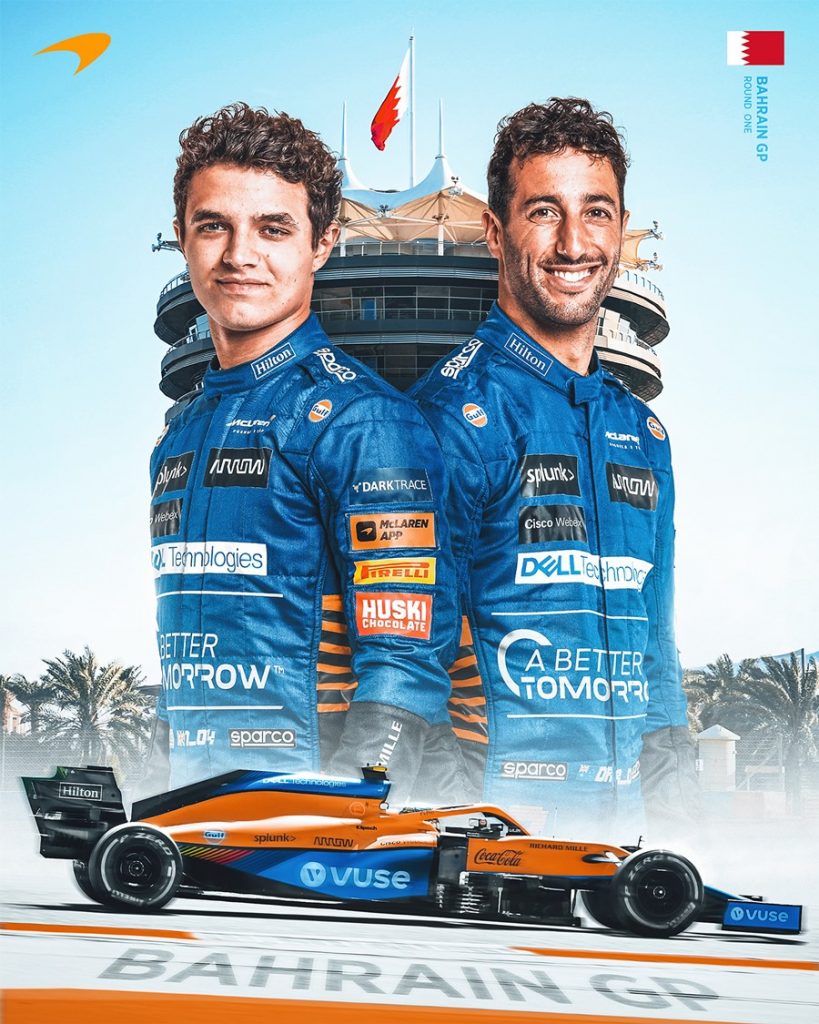 But what do you need to know about ‘your team’ and this weekend’s Bahrain Grand Prix? We’ve got it all right here, in our first race preview of 2021.

“I’m really excited for the start of the season. It’s the beginning of a new chapter, my first race in papaya and I can’t wait to get started. It’s also a special race with Bahrain being the team’s home-from-home. In my first few months at McLaren the team has made me feel right at home in such a short space of time. I feel confident and comfortable going into the new season, which is important as I want to get the most out of the car right from race one.

“As a team we made the most of pre-season testing with some smooth running. It was great to get to grips with the MCL35M in just the few days that we had to put it through its paces. I think, naturally, it takes a bit of time to adjust to a new car, but I’m feeling prepared to hit the track come Friday. It’s an exciting circuit with a few big braking zones and plenty of opportunities for overtaking. Racing at dusk is always cool and brings an added challenge to the weekend.

“This season looks like it’s going to be a competitive one, but I’m looking to hit the ground running, leave nothing on the table, give it my all for the team and hopefully give the fans something to smile about.”

“It’s time to go racing again and I’m really excited to be jumping back into the MCL35M and getting out on track. We were only out in Bahrain a couple of weeks ago for pre-season testing and looking further back it was only a few months ago since we raced there, so I’m looking forward to doing it again. I’ve had some good performances there during my career and it’s a track I’ve become very familiar with. Even though we only had a few days to test, during those days and in the lead-up to this weekend we’ve been able to learn a decent amount about the car and do some correlation work in the simulator, which has been helpful. Of course, there’s still more we can understand to extract every final bit of performance, which we’ll need.

“I feel confident and ready to enter my third year in Formula 1. My aim is to keep building on my previous experience and help the team progress as much as possible. I know how hard everyone in the team has been working, both day and night, to get us prepared to go racing again and I can’t thank them enough. We’ve got a long and challenging season ahead but hopefully we can get off on the right foot.”

“This week we kick off another exciting year of Formula 1 after a busy and productive winter for the team. Lando, Daniel and the entire team are fully focused on what will be a highly competitive and thrilling season as we aim to maintain our momentum from 2020.

“It’s incredibly difficult to predict the pecking order from testing alone, so we will only really begin to see where everyone is on Sunday. What we can be certain of is an even tighter battle this season with McLaren right in the mix.

“The hard work and dedication from every single person in the team over the winter months, alongside Lando, Daniel and our Mercedes colleagues has been outstanding. A massive thanks goes to all of them alongside our partners and, of course, our brilliant fans. We’re ready to hit the track in anger and excited at the prospect of closer racing, great battles and a competitive season ahead.”

What the stats say

While a win at Bahrain International Circuit still eludes us, we have notched up four podiums here: two with Lewis Hamilton and two with Kimi Räikkönen. Interestingly, two of the four have come when the Bahrain Grand Prix was the inaugural round of the season, in 2006 and 2010, so perhaps the season starting in the sands of Sakhir this weekend is a good omen.

Having clocked 327 laps between them during pre-season testing at the circuit, both Lando and Daniel head into the first race knowing the track so well they could probably complete a flying lap with their eyes closed. Lando’s form at this track is also cause for optimism: it’s a circuit which the stats suggest he goes particularly well at. His fourth place in the race last year followed by 10th at the Sakhir Grand Prix – on the ultra-fast ‘outer circuit’ – means he’s on a run of six consecutive top-10 finishes in Bahrain, stretching all the way back to his F2 feature race win in 2018. Daniel has racked up a fair few top-10 finishes of his own here, five in total – six if you include last year’s Sakhir Grand Prix – with a brace of fourth places representing his best result in Bahrain to date.

What to watch out for

There’s been plenty of discussion over the winter about the tweaks to the aerodynamic regulations that are aimed at reducing downforce at the rear of the car. Combined with Pirelli introducing a revised tyre construction, the changes are intended to keep speeds in check and reduce the risk of tyre failures. Those with a keen a eye will spot narrower floors in front of the rear tyres, shorter winglets on the lower half of the rear brake ducts and clipped diffuser fences. Expect talk on how teams have tackled the changes to continue this weekend, but don’t be surprised to find that the cars aren’t much slower than last year – if at all.

In an exclusive interview on McLaren.com earlier in the year, McLaren F1 Technical Director James Key said: “Although the changes seem very subtle, they have a considerable impact. We’ve been trying to claw back the downforce lost and it’s been a real challenge.” And, judging by the lap times from pre-season testing, that’s exactly what the cunning engineers up and down the pitlane have done. While we can’t divulge details like fuel load and engine settings, our best time of the pre-season test – a lap of 1m30.144s from Daniel on Day Three – compares well with Lando’s best time – 1m29.841s – from Friday free practice for the Bahrain Grand Prix just four months ago.

Speaking of free practice, there’s going to be less of it this season. Sessions one and two on Friday are both set to be 30 minutes shorter, in line with Saturday free practice. Expect to see less waiting around at the start of FP1 and FP2 and, instead, teams diving right into their programmes as soon as the light goes green at the end of the pitlane. With the same number of tyres available as last year – 13 sets of slicks per car – teams will do the same amount of running, just in 60 minutes as opposed to 90. Changes to the car that are relatively time consuming, such as a floor or rear wing change, are now likely to be less commonplace during these sessions. And, of course, if a technical problem does arise – unless it’s a relatively quick fix – there’s an increased likelihood it could write off the remainder of a session for one half of the garage.

Weather is unlikely to be a cause of missed track time this weekend, with the chance of rain almost zero throughout. Don’t discount the possibility of a sandstorm though. The odd one has blown through when F1 has been in town, most recently on the first day of this year’s pre-season test. It’s also worth keeping in mind that with FP2, qualifying and the race taking place in the evening, under Bahrain International Circuit’s dazzling floodlights, there’s going to be a noticeable temperature drop between day and night. This can affect the balance of the car, but you’ll see faster lap times in the cooler conditions.

The start of the Formula 1 season is always a nervous time for teams – exciting, but nervous. Everyone is playing their cards close to their chest right up until qualifying and even after they’ve shown their true pace there are still secrets kept under wraps in a bid to maintain the slightest advantage. Stealth is the name of the game and it’s also what needs to be in your wardrobe. That’s why we’ve just launched our new Stealth range on the McLaren Store. The range includes hoodies, tees and polos and even a softshell jacket. We’re particularly fond of the latter’s contrasting papaya pocket because, let’s face it, everyone needs a papaya pocket in their life.