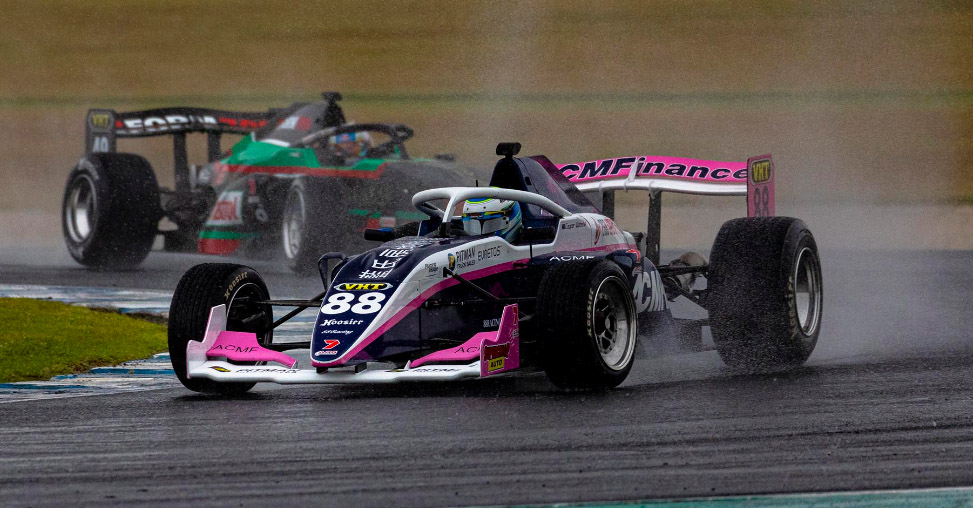 Webster kept his cool under enormous pressure from Thomas Randle, mastering the treacherous conditions in his ACMFinance.com Racing entry to win the series’ first ever race held in wet conditions.

The 17-year old led from lights to flag in the second race of Round 2 to win by a second ahead of a charging Randle.

Starting from second on the grid, Webster made a stunning start and showed the field a clean pair of heels on the treacherous opening lap.

He then withheld a stern challenge from the championship leader for a majority of the race, showing stunning car control and race craft well beyond his years en-route to a stunning victory.

Webster is the fourth different race winner from six races to date this season, and the youngest winner of an Australian Drivers’ Championship race since 2012.

Randle’s second placed-finish came from seventh on the grid and represented a solid haul of championship points, while Joey Mawson completed the podium despite finding himself off the track in the closing stages showing how difficult the conditions were.

The Team BRM driver survived a wild moment through the gravel at turn three on the last lap – followed off the road by Race 1 winner Tim Macrow.

Remarkably, both retained their track position for the final segment of the lap despite the high-speed off-track excursions.

The latter pair unfortunately made contact as they crossed the line on the final lap, amidst the spray and pouring rain – both cars ending stranded at turn one with suspension damage.

New Zealand rookie Kaleb Ngatoa starred in just his third ever session behind the wheel of his Team BRM entry; starting from pole by virtue of the top eight inversion from the qualifying results.

He held his own against the leading contenders however unfortunately failed to finish after an off left him stranded on the exit of turn 10.

Heading into tomorrow’s Round 2 feature race, Randle holds a 14-point lead over Tim Macrow in the Gold Star standings.

Race 3 is scheduled for 13:40 AEDT on Sunday and will be broadcast live and free across the screens of the Seven Network.

MEDIA RELEASE/S5000 - Photo: ARG James Golding picked up where he left off on Friday…