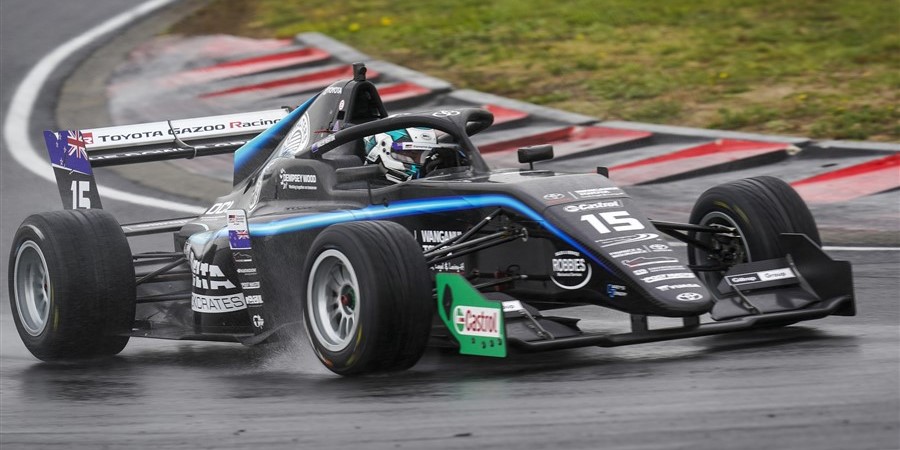 The final moments of the session were some of the most exciting in the history of the Castrol Toyota Racing Series and indeed the 66 years of the Grand Prix as the top spot was traded between Daniel Gaunt, Chris van der Drift, Matthew Payne, Tom Alexander and Conrad Clarke.

Veteran Greg Murphy looked to have secured a front row starting spot with a superb final effort but in the final moments it was Marton’s Ngatoa who stole the show. The driver who raises all of his own sponsorship and had been flat out off the track for a year raising the money to compete in the TRS championship this season admitted it was an emotional moment.

“They told me P1 on the radio,” he said. “I have to say I did get a bit emotional. I mean, this is the New Zealand Grand Prix. It’s a very special moment and for everyone who has supported me, but we’ve got a full day of racing ahead and I’ve got to focus on that now.”

“With it being so changeable and on limited time it was all looking for grip and finding it in unusual places, especially on the sections of track we don’t normally use here,” he said. “It all came together thankfully.”

Van der Drift and Payne occupy the second row for the Grand Prix with Murphy a sensational fifth and Clark sixth. The fourth row will comprise Tom Alexander and Andre Heimgartner with Damon Leitch the faster of the two Leitch brothers in ninth.

Saturday race winner Shane van Gisbergen will start from tenth with Brendon Leitch another one to watch starting from 12th.