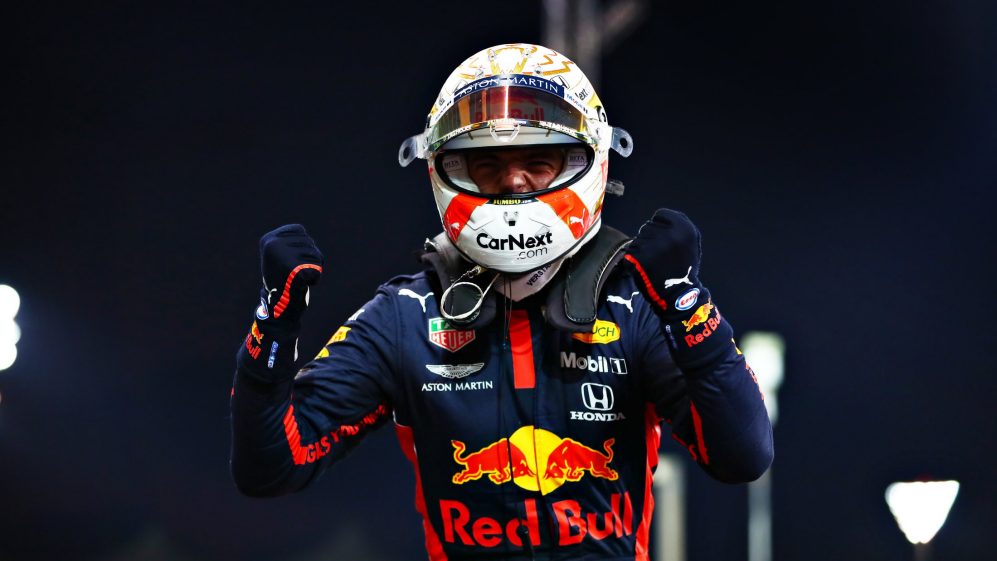 Max Verstappen delivered a magical lap in qualifying to snatch a shock pole position for the season-ending Abu Dhabi Grand Prix, the Red Bull driver getting the better of Mercedes for the first time in 2020 with the top three separated by just 0.086s…

The Dutchman’s qualifying started badly as he flatspotted his first set of tyres and then struggled for performance in the first segment. But he got better and better as the session went on under the lights at Yas Martina to take the first non-Mercedes pole in Abu Dhabi since 2013.

It ended Mercedes run of being one-two in every Q3 session at Abu Dhabi in the turbo hybrid era, Verstappen’s stunning middle sector making the difference to put him on P1 at a track where he has never led a lap in his Formula 1 career.

Valtteri Bottas, who was told by team boss Toto Wolff on team radio “all you have Valtteri”, slotted into second, pipping his Mercedes team mate Lewis Hamilton, who was making his racing return after missing the last race having tested positive for Covid-19 in Bahrain.

McLaren’s Lando Norris delivered one of the best laps of his career to go fourth quickest, just 0.25s off pole, with Red Bull’s Alex Albon having a smoother weekend to take fifth as he fights for his future at the team beyond the end of this season.

Carlos Sainz was sixth, running an older engine than his McLaren team mate which it is believed is costing him around two tenths of a second per lap, ahead of AlphaTauri’s Daniil Kvyat, who continues his very strong end to a campaign which might be his last in F1.

Lance Stroll was the best-placed Racing Point in eighth, with his team mate Sergio Perez starting from the back after a host of engine component changes – and that spices up the battle for P3 in the constructors’ championship as their lead over McLaren is just 10 points.

Ferrari’s Charles Leclerc and the other AlphaTauri of Pierre Gasly rounded out the top 10 in 2020’s final qualifying session.

Q1 – Hamilton sails to the top as Giovinazzi scrapes in

Hamilton briefly went to the top of the times, only to have his lap time deleted after exceeding track limits at Turn 21. The Briton ran so wide, he clobbered the large sausage kerb with such a force, he asked his team to have a look at the floor to check for damage.

He did a cool down lap and went again, but could only go eighth – having taken the best out of the tyres. So the Mercedes driver was forced to do a second run, and he promptly put the car quickest of all, ahead of Bottas and an impressive Leclerc, who was in turn 0.8s quicker than team mate Vettel.

Max Verstappen headed out on a second set of tyres, too, after flat spotting his first set on exit from the garage as he braked heavily to avoid Nicholas Latifi leaving the Williams pit – but had no problem easing through.

Antonio Giovinazzi was in the drop zone in the closing stages, but pumped in a lap that pushed his Alfa Romeo team mate Kimi Raikkonen out of qualifying, ensuring he ends the year leading the head-to-head with the Finn.

Kevin Magnussen improved but it wasn’t enough to progress, and he was eliminated along with George Russell, Pietro Fittipaldi and Latifi, who spun late on to bring out the yellow flags briefly.

Mercedes continued their domination at Yas Marina, with Hamilton heading Bottas once more in Q2, with Verstappen having a cleaner run of things in this segment.

The same could not be said of his Red Bull team mate Albon, who had his first lap time deleted for exceeding track limits, heaping the pressure on for the final run. This time, he got it altogether, and popped into fourth to ease through – though on the soft tyres rather than the medium.

It was super close further down the timing charts, with Daniel Ricciardo having his first lap deleted and then setting a time that was only good enough for 11th. That became 12th when his Renault team mate bettered him by half a tenth of a second.

Vettel said his pace was “copy -paste” of Q1, so it was unsurprising he was eliminated, with Giovinazzi joining the ‘lap time deleted’ club as he ended up 14th with Sergio Perez opting not to complete a lap to give him free tyre choice as he’ll be starting from the back of the pack after a series of engine component changes.

Aussie Daniel Ricciardo will start from 12th on the grid.

Bottas set the pace after the first runs, fending off Verstappen and Hamilton to take provisional pole – and even when Hamilton went faster second time around, Bottas was able to respond.

“I’m just grateful to be back, and while probably not 100%, I still gave it my all,” said Hamilton after qualifying.

“Naturally I don’t want to go into too much detail of it all, but like I said in Australia [at the beginning of the season], just how serious the virus is. I really feel for those that have suffered from it, those that have lost loved ones from it, and can understand how as it’s a nasty virus. 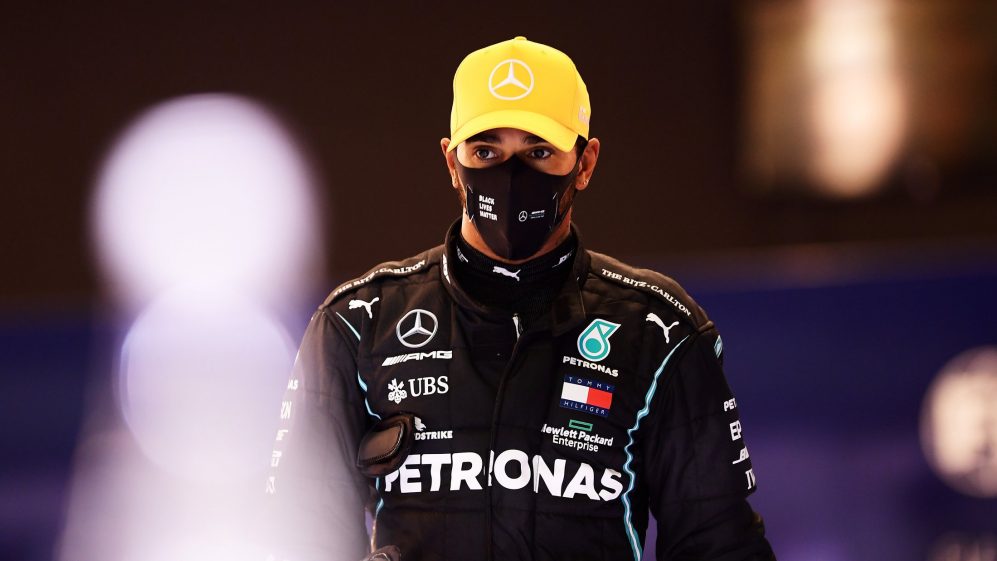 “I’m not 100%, I still have some feeling within my lungs, but nonetheless, normally I would drive if one of my arms was hanging off – that’s what we do as racing drivers. It definitely won’t be the easiest of races physically, but I will manage and give it everything I’ve got.

However, Bottas and Hamilton were not counting on Verstappen going even quicker to snatch his first pole since the 2019 Brazilian Grand Prix, sparking joyous scenes in the Red Bull garage.

Hamilton starts off the front row in Abu Dhabi for only the second time in the history of the UAE race, with Norris’ fourth his best since the opening round in Austria, and the position ensured he beats Sainz 9-8 in the qualifying head-to-head.

Albon got his seventh top-five start, ahead of Sainz in sixth with Kvyat getting his second successive top-seven start. Racing Point didn’t quite have the pace to fight P3 rivals McLaren with Stroll’s P8 only his second top-eight start in the last eight Grands Prix.

Leclerc once again had the beating of Ferrari team mate Vettel, as he ended up a solid ninth, with Gasly completing the top 10 as AlphaTauri got both cars in Q3 for the fourth time in five races.

“I said before I went into qualifying it’s going to be the final send of the season and we did that, so very happy with that,” said pole-sitter Max Verstappen. 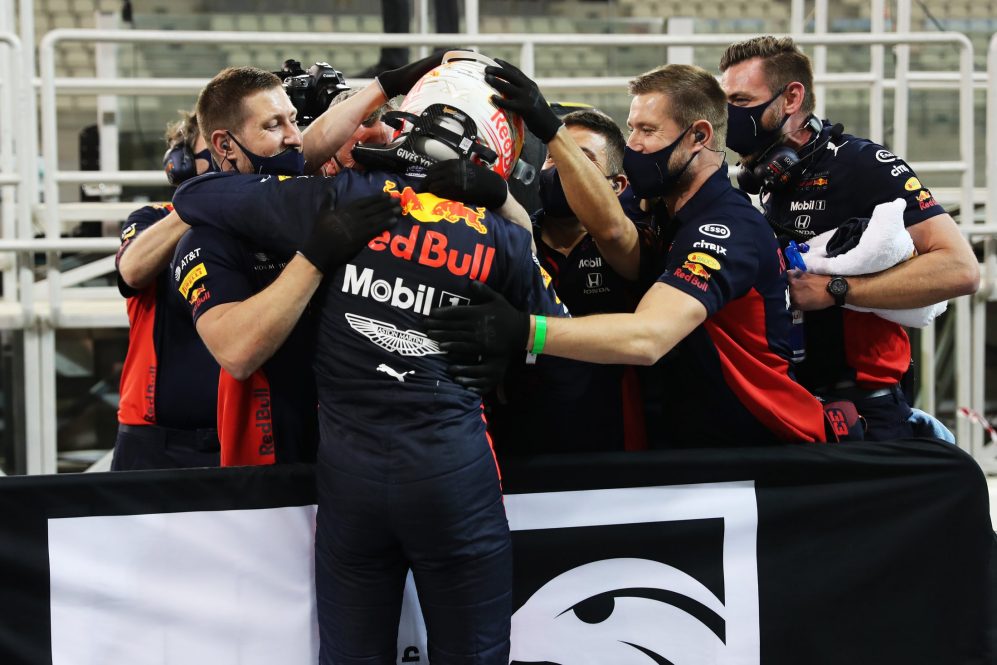