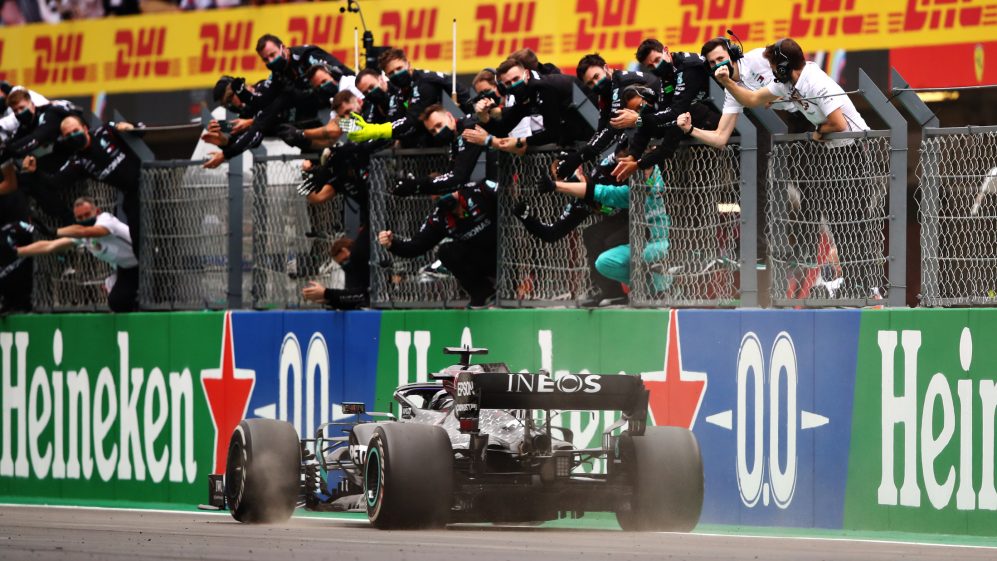 Lewis Hamilton moved past Michael Schumacher with his 92nd victory at the Portuguese Grand Prix. In doing so Hamilton also closed in on yet another of the German’s achievements, a 7th Formula One World Championship.

The grid assembled under grey skies in Portugal with light drops of rain reported by Pierre Gasly during the warm up lap to add another element to a number of unknowns. Hamilton made an ideal start to head the field in the 440 metre towards turn 1, while Valtteri Bottas was much slower to get up to speed and found himself under pressure from Max Verstappen and Sergio Perez. Verstappen grabbed second from Bottas as Perez ran wide at the exit of the first corner. Sainz also ran wide as Charles Leclerc tried unsuccessfully to take 5th place from the McLaren.

Bottas managed to move back alongside Verstappen in the run towards turn 3 and edged the Aston Martin Red Bull driver over the kerbs as he reclaimed 2nd place. Perez also took advantage of Verstappen’s predicament to take 3rd, albeit momentarily as the Red Bull touched the rear wheel of the Racing Point which sent Perez bounding across the exit of turn 4 and then spun off the circuit. Steward later decided not to penalise either driver for the incident, much to the frustration of Otmar Szafnauer, team principal of Racing Point.

“If you look at the video, it looks like Verstappen went off track and instead of coming back on gingerly, he darted back and hit Sergio,” Otmar Szafnauer told Sky Sports.

Max Verstappen saw the incident quite differently. “It was very low grip at the start and I just tried to stay out of trouble,” he told Sky Sports. “Of Course I had a little touch with Sergio, but he didn’t give me enough space so he basically took himself out. It was raining a little bit and I was just trying to keep the car on the track.”

The mayhem continued in what could only be described as a disjointed opening lap. Hamilton and Verstappen both locked brakes which cost them the lead and 3rd place respectively. Conversely, Carlos Sainz had made a dream start and despatched both Verstappen and a slowing Hamilton for 2nd place as the light drops of rain intensified.

Bottas led at the end of the opening lap from Sainz, Hamilton, Norris, Verstappen, Raikkonen, Leclerc, Ricciardo, Albon and Gasly. Raikkonen was in vintage form as he mastered the slippery conditions to move from the rear quarter of the field well into the top 10. Sainz also enjoyed the difficult conditions and pounced on a more cautious Bottas to take the race lead on lap 2 as Perez limped back to the pits after the earlier incident with Verstappen.

Tyre temperatures and track conditions had both improved by lap six as those who had started the race on the red walled soft tyre began to drop off the pace. Sainz’s time at the top came to an end on lap 6 as Bottas claimed the lead, with Hamilton close behind. Sainz quickly radioed to the McLaren engineers that he was struggling with the softer tyre. It was a warning for the likes of Verstappen, Norris, Raikkonen, Ricciardo and Gasly, who had all started on the same tyre compound.

Raikkonen plummeted down to 20th when the Alfa Romeo team called him into the pits on lap 12 for a change to the medium compound while Bottas enjoyed a 2 second lead over Hamilton. Verstappen and Leclerc were evenly spaced some 5 seconds apart with Sainz, Norris, Gasly, Ricciardo, Stroll and Ocon rounding out the top 10. Ricciardo was the next to stop and joined Raikkonen at the tail of the field.

Lance Stroll’s race came to an end on lap 18 after contact with Norris at turn 1. Stroll had used the DRS zone to close a little too rapidly on the McLaren ahead and swerved late to the left to avoid a rear end collision. He moved around the outside of Norris and then cut back towards the middle of the track only to catch the front wheel of the McLaren which spun the Racing Point and cause damage to both cars.

“What the .. is this guy doing,” an agitated Norris exclaimed over the team radio. “I’ve got wing damage I need to box.”

Stroll was judged to have caused the collision and was issued with a 5 second time penalty. It has little impact on the race as Stroll’s car had remained stationary in the pitlane for some time. He did eventually return to the track only to receive a second penalty for exceeding track limits.

Despite expressing concerns about the wear on his medium tyres, Lewis Hamilton closed the gap to the race leader and used the DRS zone along the pit straight to take the lead on lap 20. Verstappen switched to the medium compound tyres when he stopped on lap 24 and returned to the circuit in 6th place, some 4 seconds behind Sainz.

By lap 34 Hamilton and Bottas, who had not yet stopped, led from Leclerc, Verstappen, Ocon, Perez, Russell, Ricciardo, Gasly and Sainz.

Hamilton stopped on lap 41 and moved to the hard compound tyre, while Bottas was instructed shortly after to do the same. Bottas suggested a move to the softer red tyre as an alternate strategy but was given the same hard compound tyres as his teammate when he stopped a short time later.

Daniel Ricciardo had climbed well inside the top 10, but gradually backed down towards the edge of the top 10 on much older rubber than those around. He had sat behind Ocon in 7th but dropped a place to Gasly on lap 46.

Hamilton looked to be comfortable at the front on lap 59, with a 17.7 second lead over Bottas, though all was not well with the British driver, who reported to his crew that he was suffering from an unspecified cramp of which there was little the team could do.

Despite the discomfort, Lewis Hamilton went on to win by 25 seconds from Bottas and Verstappen. Leclerc, Gasly, Sainz, Perez, Ocon, Ricciardo and Vettel completed the top 10.

Hamilton’s 92nd win took him past Michael Schumacher as the sport’s most prolific race winner in what was his 70th win with Mercedes, having won 22 time with McLaren before.

“I couldn’t have done this without you guys, thank you so much. Thank you for continuing to believe in me in this drive for perfection, it’s such as honour to work with you guys,” Hamilton radioed to the Mercedes crew.

“I owe it to these guys here and back at the factory for their tremendous work. They’re continuously innovating and pushing the barrier even higher every year. It’s been such a privilege working with them and I’m so grateful. It inspires you, that collaboration, there’s nothing quite like it,” Hamilton told Sky Sports. “Today was tough, it was all about temperatures today and that was something with the set up that I pre-empted today. We got some spitting just at the start and got a good start. Then at turn 7 I had a huge oversteer moment and you didn’t know what was next. So I really backed off massively. Arguably I should have tried to defend from Valtteri, but I thought that I’d come back later on and fortunately that was what I was able to do. It’s a physically demanding sport and I had a cramp in my right calf late in the race. I was lifting down the straight because it was about to pull. Pretty painful but I had to somehow get through it because it is what it is. I could only ever dream of being where I am today. I didn’t have a magic ball when I chose to come to this team and partner with these great people, but here I am. What I can tell you is that I’m trying to make the most of it every single day. We’re all rowing in the same direction and that’s why your seeing the success that we are having. My Dad’s here, which is amazing and my step mum Linda and Roscoe, so it’s a very blessed day.”

“It’s going to take some time to fully sink in. I was still pushing across the finish line as I am still very much in race mode mentally. I can’t find the words (to describe the 92th win) at the moment.”