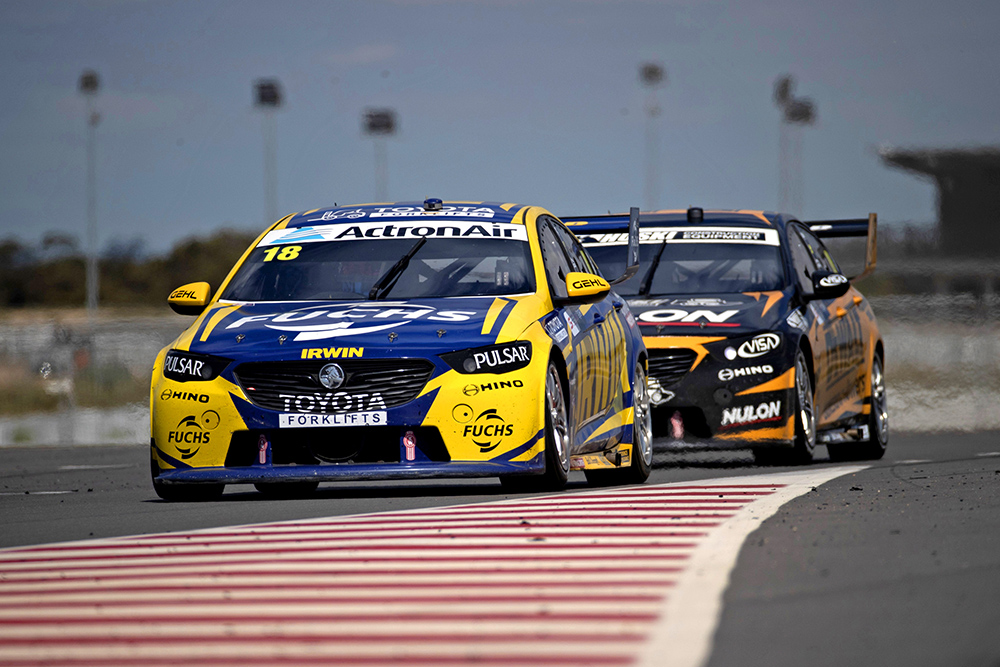 Team 18 is ready for its first Supercheap Auto Bathurst 1000 as a two-car squad, with the IRWIN Racing and DEWALT Racing drivers and crew ready to conclude the 2020 Virgin Australia Supercars Championship in style.

2013 Bathurst 1000 winner Mark Winterbottom will line up for his 17th Bathurst 1000 with 24-year old James Golding in the IRWIN Racing Commodore. Golding teams up with Winterbottom following a four-year stint with Garry Rogers Motorsport alongside a host of racers fresh from a full-time Supercars seat.

Meanwhile two-time Bathurst runner-up Scott Pye will be joined by Dean Fiore in the DEWALT Racing Commodore. The West Aussie lines up for his 12th Bathurst 1000 as he moves to Team 18 following a six-year stint as an endurance co-driver with Nissan Motorsport.

Fiore and Golding represent two strong co-driver recruitments in the off-season for the Charlie Schwerkolt-owned squad.

Golding’s recent Bathurst performances have been impressive, finishing eighth and 11th in the last two years as the lead driver with Richard Muscat, while Fiore has proven himself as a consistently-strong performer with a best result of sixth in 2017 with Michael Caruso.

The Mount Waverley, Victoria based squad heads to Bathurst following a two-week stay at Ross Stone Racing on the Gold Coast, with the team aiming to keep both drivers in the top ten of the championship and boost their position from eighth in a close teams championship battle.

Winterbottom has had a solid-season in the IRWIN Racing Commodore with three top fives and sits ninth in the championship. The 2015 Supercars champion finished sixth last year in The Great Race for Team 18 alongside his 2013 Bathurst-winning co-driver Steve Richards.

Pye heads into the championship finale tenth in the drivers standings with three podiums and five top-five finishes.

The 2020 Supercheap Auto Bathurst 1000 commences with cars hitting the track for Practice 1 on Thursday at 9:30am AEDT. Qualifying will take place on Friday followed by the Top Ten Shootout on Saturday afternoon, before the 58th running of The Great Race kicks off from 11:30am AEDT on Sunday.

All four days of action can be viewed live on Fox Sports 506 and Kayo Sports, while free-to-air broadcaster Network 10 will commence their live coverage from Friday.

“The Bathurst 1000 is always the most exciting race of the year; it’s why we go racing” said Winterbottom

“It comes with a different feel this year given it’s our grand finale, when normally we would head there with a few races remaining in the championship.

“If we can finish off the year with a great result at the mountain it will be fantastic for everyone at IRWIN Racing and Team 18.

“It’s a track that can be rewarding and cruel for you, I won the race in 2013 and stood on the podium in 2015, but I’ve led the race and had the car catch fire and all sorts of things happen there.

“I feel like I know what it takes to win and to win it with IRWN Racing and Team 18 would be incredibly special.”

“I like the rule of getting your lap back, we see things at Bathurst happen on Lap 5 where you could be put a lap down through circumstance and your day could be over, so to get that lap back is going to be fantastic.

“I love the rule the way it is written, it means you don’t get the full lap back but you’re only going to get about ten seconds up the road on the race leader. It’s crucial to get the lap back but there’s still work to do from there.”

“It’s great to be teaming up with Mark Winterbottom for the Bathurst 1000, to team up with someone who has won the race before is really awesome and I can’t wait to get up there, I think we are going to make a very strong combination,” said James Golding.

“Considering the line-up of co-drivers, I think this could be one of the fastest Bathurst races to date, so our job is even more important than what it has been in previous years.

“Where the role of the co-driver is to keep the car safe and bring it back, which is still extremely important as it’s a long-race, but now that the competition is even higher it’s going to be as important to be consistently quick across a stint.”

“The Bathurst 1000 is the most iconic race in the country, it’s the one every driver wants to race and it’s the one race that everyone stops to watch,” said Pye.

“I’ve had some good success there in the past with a couple of podiums, but I definitely don’t want to come second again, I’d love to go one step higher and go for the win.

“It would mean everything to cap off the season, especially this year with the way the championship finishes with it being our finale.

“To win this year’s race would be even more special than in a regular season because it’s the finale.

“We would go home to a three/four-month break winning the biggest race of the year and the last race we’ve been to.

“Our preparation is going to be different. There’s the parade through the centre of town every year and the drivers parade lap of the track before the race, so not having those key moments that build the emotion and the anxiety before the race is going to bring a different feel.

“Unfortunately it’s the way things are this year that the majority of fans can’t be there but there will be 4000 lucky fans and a massive TV audience watching from home which is great, hopefully we can put on a great show at Bathurst.”

“Super excited would be the best way to describe it,” said Fiore.

“I’ve been watching the team from the couch this year and they’ve been doing a fantastic job and I can’t wait to turn a wheel on Thursday.

“Usually you have the entree before the main in Sandown traditionally going into Bathurst, so without that there’s going to be challenges, but I know exactly what I need to do and you don’t need to go out there top the timesheets straight away or at all, for me it’s just important to remember what my role is and execute on that.

“All the ingredients are there for something special to happen, but I generally try not to focus on the outcomes, I just want to focus on the process so that’s my goal and aim for this year’s race.”