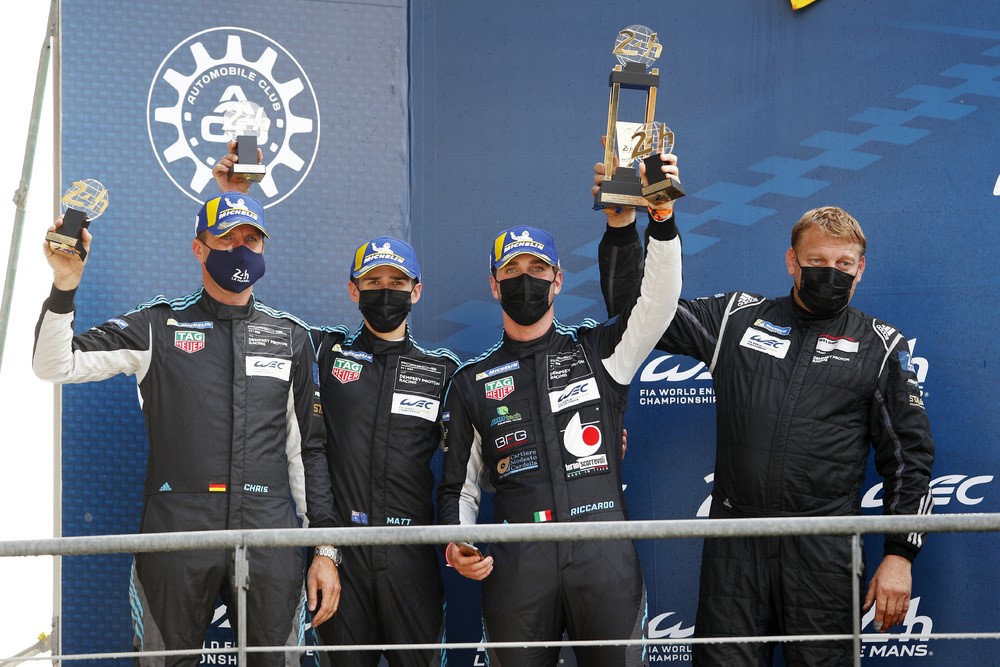 The Porsche customer team Dempsey-Proton Racing finished this year’s edition of the 24 Hours of Le Mans with a podium result of second placed in the GTE-AM class, the Porsche 911 RSR was shared by works driver Matt Campbell from Australia, Italian Riccardo Pera and Proton team owner Christian Ried from Germany.

Velocity Magazine once again has an exclusive audio report direct from Matt in France.  Have a listen below what he had to say, the next day after the 24hour race, you can hear in his voice how tired he is!

Matt now heads to the ADAC TOTAL 24-hour race at the amazing Nürburgring-Nordschleife this coming weekend in Germany, we asked Matt about this and he said, “Yep

EDIT: we are hearing that Porsche has pulled all of its factory drivers from the N24HR due to a positive COVID-19 test at Le Mans, when we hear more we will post this. HEAR FROM MATT AGAIN WITH THE LATEST N24 UPDATES HERE 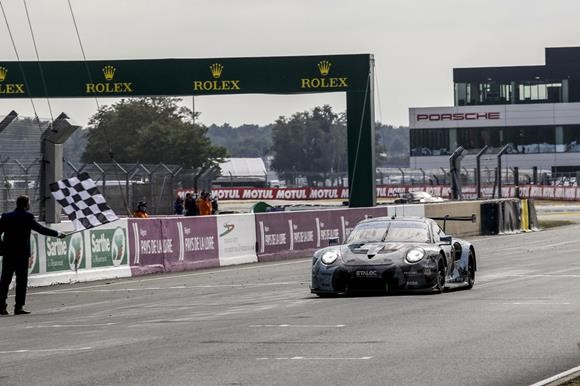 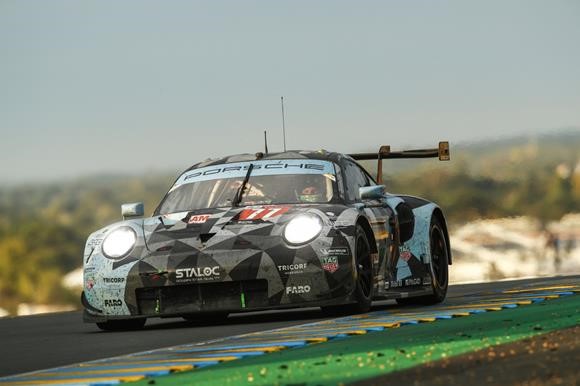 The Porsche customer team Dempsey-Proton Racing has finished this year’s edition of the 24 Hours of Le Mans with a podium result. The Porsche 911 RSR shared by works driver Matt Campbell from Australia, Italian Riccardo Pera and Proton team owner Christian Ried from Germany concluded the race on second place in the GTE-Am class. The Porsche GT Team, however, endured a great deal of bad luck with the two latest-generation 911 RSR at the endurance classic in the northwest of France.

After just five hours of racing, the reigning world champions Michael Christensen from Denmark and Frenchman Kévin Estre, who received support from Belgium’s Laurens Vanthoor at Le Mans, were thrown more than ten laps behind due to a power steering fault. More repair work over the following hours widened the gap in the GTE-Pro field to 15 laps. The vehicle ultimately crossed the finish line in sixth place in its class.

The No. 91 sister car took the flag at the Le Mans 24 Hours one position ahead. Gianmaria Bruni from Italy, Austria’s Richard Lietz and the Frenchman Frédéric Makowiecki had managed to maintain contact to the leaders until early Sunday morning, only to have an electrical problem dash all podium dreams. The ca. 515 hp car driven by the winners of the WEC race at Spa-Francorchamps contested the 88th edition of the French endurance class decked out in a red and white livery. With this, Porsche commemorated the overall victory of the 917 KH 50 years ago in 1970, which marked the first of 19 overall victories so far for the sports car manufacturer from Stuttgart.

The competition in the GTE-Am class provided gripping race action to the flag. After a final safety car phase, the field went green again with 24 minutes remaining on the clock. Three vehicles from two manufacturers fought for two podium spots. Factory driver Matt Campbell kept his cool at the wheel of Dempsey-Proton Racing’s No. 77 car. After impressive duels and slipstream battles, the young Australian came out on top, bringing the 510 hp 2019-spec 911 RSR over the finish line in second place. Matteo Cairoli, however, narrowly missed out on claiming a podium step. After a close duel with a Ferrari, the Italian took the flag in fourth place. The No. 56 car of Project 1, which Cairoli shared with last year’s winner Egidio Perfetti from Norway and Larry ten Voorde from the Netherlands, had even led the GTE-Am field over long stretches. However, a one-minute penalty threw the crew behind.

In the FIA WEC manufacturers’ classification, Porsche now ranks second after seven of eight rounds. In the drivers’ category, Bruni and Lietz lie fifth, with the defending GTE world champions Christensen and Estre on fourth place. The final round of the 2019-2020 World Endurance Championship season will be held in Bahrain on 14 November.

Comments on the race
Pascal Zurlinden (Director Factory Motorsport): “Our first outing with the Porsche 911 RSR-19 at Le Mans was anything but easy. We’ve learned a lot. After achieving pole position, we’d expected more from the race – but we were disappointed. We’ll combine our experiences, draw our conclusions, and return stronger next year. Congratulations to our customer teams Dempsey-Proton Racing, Project 1 and Gulf Racing, who finished in the top five of the GTE-Am class.”

Alexander Stehlig (Head of Operations FIA WEC): “We continued to optimise our Porsche 911 RSR throughout the practices and were rewarded with pole position. That was great. Not so great, however, was the start of the race. We immediately realised that we couldn’t keep up in terms of acceleration and top speed. These factors are particularly painful because we also lost more and more time in traffic. On top of that, there were too many technical problems. We’ve got a bit of homework to do. We’ll improve the car and our processes and then we’ll be back to attack at the final round in Bahrain.”

Matt Campbell (Porsche 911 RSR #77): “Second place is a dream result for us, because given the pace of the winners, we couldn’t do better. The drivers and our team did a great job. We can all be very proud. The final sprint after the last safety car phase was great fun. I just went all-out. We’ll celebrate second place as if it were a win.”

Gianmaria Bruni (Porsche 911 RSR #91): “After claiming pole position on Friday, I never expected the race to be this hard. We gave our very best and drove a clean race. The team worked perfectly, but unfortunately, we lacked performance and the technical problems prevented a better result. At the final race in Bahrain, we want to show that we’ve learned our lessons.”

Richard Lietz (Porsche 911 RSR #91): “That was a fight with highs and lows over many days. Despite intensive preparation and successful tests, the car wasn’t perfectly balanced. We got that under control quickly and finally secured pole position. However, in the race, we couldn’t maintain the pace of the frontrunners. We did our best to keep contact – until we were hampered by a minor technical problem. That’s just how it is at Le Mans sometimes. You shouldn’t let that get you down.”

Frédéric Makowiecki (Porsche 911 RSR #91): “I’m disappointed and exhausted at the same time. Le Mans is my home race and I really want to win here one day. We all invested enormous energy in this special event that only takes place once a year. It really hurts when things go wrong. This year it immediately became obvious early that the competition wasn’t as close as hoped. If you want to keep up, you always have to drive at the limit. Under such conditions, you get technical problems. That’s annoying, but that’s just how it is.”

Michael Christensen (Porsche 911 RSR #92): “We were surprised at the pace our competitors could set right at the start. We couldn’t really keep up, but we did our utmost. When the power steering malfunctioned during Laurens’ stint and we stood in the pits for more than ten laps, we had to relinquish any hopes. When you lack competitiveness and technical bad luck strikes, it won’t be a good day – that’s just the way it is.”

Kévin Estre (Porsche 911 RSR #92): “It quickly became clear in the race that our performance compared to our rivals wouldn’t be enough to reach the podium. That was the first bitter pill to swallow. Then, a repair cost us twelve laps. That was the last straw for us drivers and the team members. Still, we pulled ourselves together and did our very best. This year’s experiences will help us to be much stronger in 2021.”

Laurens Vanthoor (Porsche 911 RSR #92): “We weren’t good enough. After the practice and the qualifying, we’d hoped for more, but the pace wasn’t enough to keep up with the competition. What’s more, technology threw us far back. The podium and victory were out of reach this year. We want to change that as soon as we can and celebrate again after next year’s 24 Hours of Le Mans.”

Larry ten Voorde (Porsche 911 RSR #56): “The race weekend was extremely exhausting. First, I competed in the Porsche Carrera Cup Le Mans, which I won, and then I contested the 24-hour race. But I’m really happy that both events worked out so well. I pulled out all stops in my last stint to gain another position. It’s a shame it didn’t end with a podium result.”