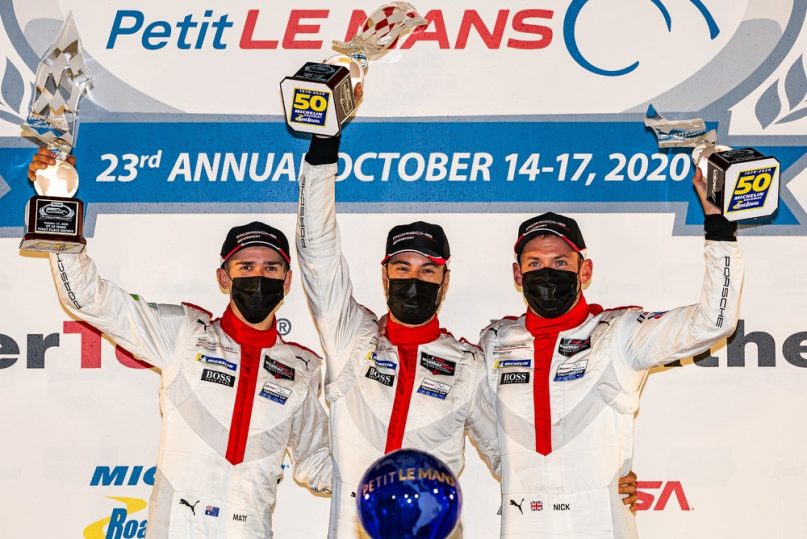 Matt has sent us his thoughts on the tough race that saw him being spun around after contact with another competitor.  Have a listen to what he had to say below, then have a read of the Porsche Motorsport Australia report below that. 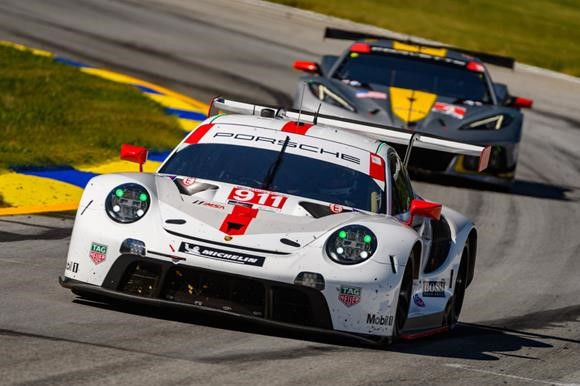 At “Petit Le Mans” on the Road Atlanta racetrack, the Porsche GT Team has achieved its first win in this year’s IMSA WeatherTech SportsCar Championship. Works drivers Nick Tandy (Great Britain), Frédéric Makowiecki (France) and Matt Campbell (Australia) won the ten-hour race in the US state of Georgia by a narrow 1.779 seconds. The second Porsche 911 RSR, driven by Laurens Vanthoor (Belgium), Earl Bamber (New Zealand) and Mathieu Jaminet (France), became entangled in an accident in the turbulent final phase and reached the finish line in fifth place. After nine of eleven races, Porsche ranks third in the GTLM manufacturers’ championship.

Due to the safety car phases, the frontrunners in the GTLM class never lost sight of each other over the entire “Petit Le Mans” distance. Most of the time, they lapped the 4.088-kilometre racetrack separated by just a few seconds. Depending on the individual pit-stop cycle, the lead changed multiple times. Shortly before the halfway mark, Matt Campbell withstood a nail-biting moment when his Porsche 911 RSR was forced into a spin in a slight collision. Fortunately, the 515 hp works car from Weissach sustained only light damages. The young Australian was able to continue.

In the No. 912 sister car, Laurens Vanthoor turned the fastest lap of all GTLM teams, however, Mathieu Jaminet was handed a drive-through penalty for a minor collision with a GTLM rival, which cost the squad around 30 seconds. As a result, the No. 911 took over the task of staying close to the leader. When the leading BMW, which had held the top spot over a long period, had to make an unscheduled pit stop half an hour before the end of the race, Frédéric Makowiecki grabbed his chance and swept into the lead.

The Frenchman held firm to his top spot, even during two more restarts after safety car phases. With just four minutes left on the clock, a collision involving the No. 912 Porsche 911 RSR triggered one last full course yellow. Although Laurens Vanthoor managed to bring the car over the finish line, he lost two laps. The race did not restart and ended behind the safety car.

As well in the GTD class for vehicles complying with the FIA GT3 regulations, no team was able to pull clear of the field. After ten hours, the seven fastest vehicles were within one lap. The Porsche 911 GT3 R fielded by the Wright Motorsports customer team and driven by the American works driver Patrick Long, his compatriot Ryan Hardwick and Jan Heylen from Belgium, took the flag in fourth place. Fifth went to the 500 hp Porsche 911 GT3 R campaigned by the Pfaff Motorsports customer squad, with Porsche development driver Lars Kern (Germany), the Norwegian Dennis Olsen and the Canadian Zacharie Robichon sharing driving duties.

The next and penultimate round of the IMSA WeatherTech SportsCar Championship will be contested on November 1, 2020, at Laguna Seca in the US state of California.

Comments on the race
Pascal Zurlinden (Director Factory Motorsport): “What a fantastic result for the team. We’ve suffered many setbacks during this IMSA season. This victory at ‘Petit Le Mans’ is the reward for all the hard work that everyone in the team has done. That includes both the team here in the USA and our Weissach squad.”

Steffen Höllwarth (Head of Operations IMSA Championship): “The monkey’s finally off our back. Those were some tough and intense ten hours with ups and downs. We had to deal with some minor setbacks, but we didn’t let it ruffle our feathers and were in the right place at the right time in the end. I’m thrilled for the boys. Unfortunately, in the fight for GTLM victory, the number 912 car was involved in an accident while lapping a GTD vehicle, otherwise we could have brought home an even better result. Still, a huge compliment to the whole team. Today we benefited from the necessary racing luck several times, which has evaded us in the past. We’re happy with this victory and we’re looking forward to the last two races of the season.”

Matt Campbell (Porsche 911 RSR #911): “Quite honestly, I never expected the race to go like that. We experienced ups and downs, but ultimately we drove a fantastic race. This win is something very special. I’m over the moon.” 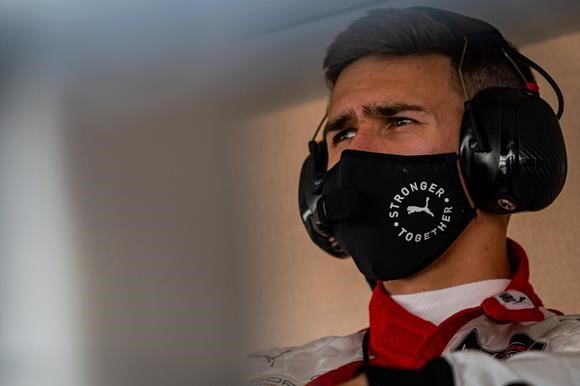 Nick Tandy (Porsche 911 RSR #911): “Petit Le Mans was extremely exciting, especially towards the end. We ran a risky strategy to maintain contact with the leaders. There were one or two incidents early on in the race, but the last few hours ran perfectly. After the problems that we’ve had this year, we would’ve been happy with a podium finish. To see Fred actually cross the finish line in first place was a very emotional moment.”

Frédéric Makowiecki (Porsche 911 RSR #911): “That result was totally unexpected. Normally in such a race, we wouldn’t have been in a position to fight for the GTLM victory, but we were in the right place at the right time. This is a very special moment for me. I’ve already won Petit Le Mans with Nick. This time Matt was part of our team and he did a great job. We attacked over the entire distance, and we couldn’t have driven even a tenth of a second faster.”

Laurens Vanthoor (Porsche 911 RSR #912): “I’m disappointed. We lost about 15 seconds at the final pit stop when we were hampered by another vehicle. After the last safety car phase we were running third and we had only three laps to go. After I quickly squeezed past a Corvette, I wanted to overtake a GTD car. After pulling level with the car, the other driver suddenly turned in. Our cars touched and we both spun. It was a risk, of course, because ultimately I wanted to win. I think if I faced a similar racing situation, I’d make the same decision. But it simply didn’t work.”

Earl Bamber (Porsche 911 RSR #912): “I’m sorry that our day ended like this because it would’ve been great to achieve a one-two for Porsche. After the problems we faced, Laurens put us back at the front with a great drive. Unfortunately, we weren’t rewarded for this. Still, it’s great for the team that we scored our first win of the season.”

Mathieu Jaminet (Porsche 911 RSR #912): “We experienced a difficult race with many setbacks and bad luck. We’ve worked hard and kept coming back. It’s such a shame that our day had to end like this. Still, I’m really pleased that Laurens came out of the accident unscathed. The number 911’s victory is a tremendous success for Porsche and the entire team.”

LISTEN TO MORE FROM MATT HERE… 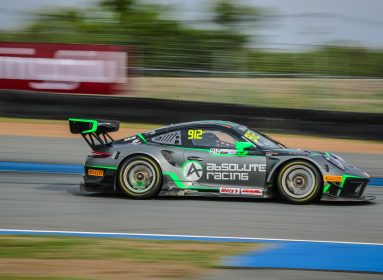 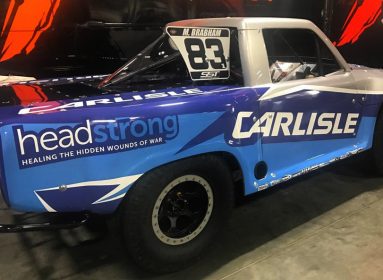 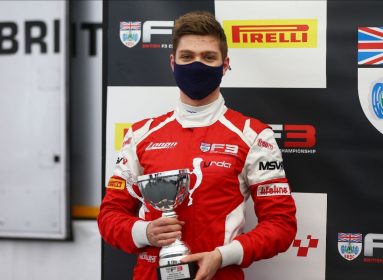