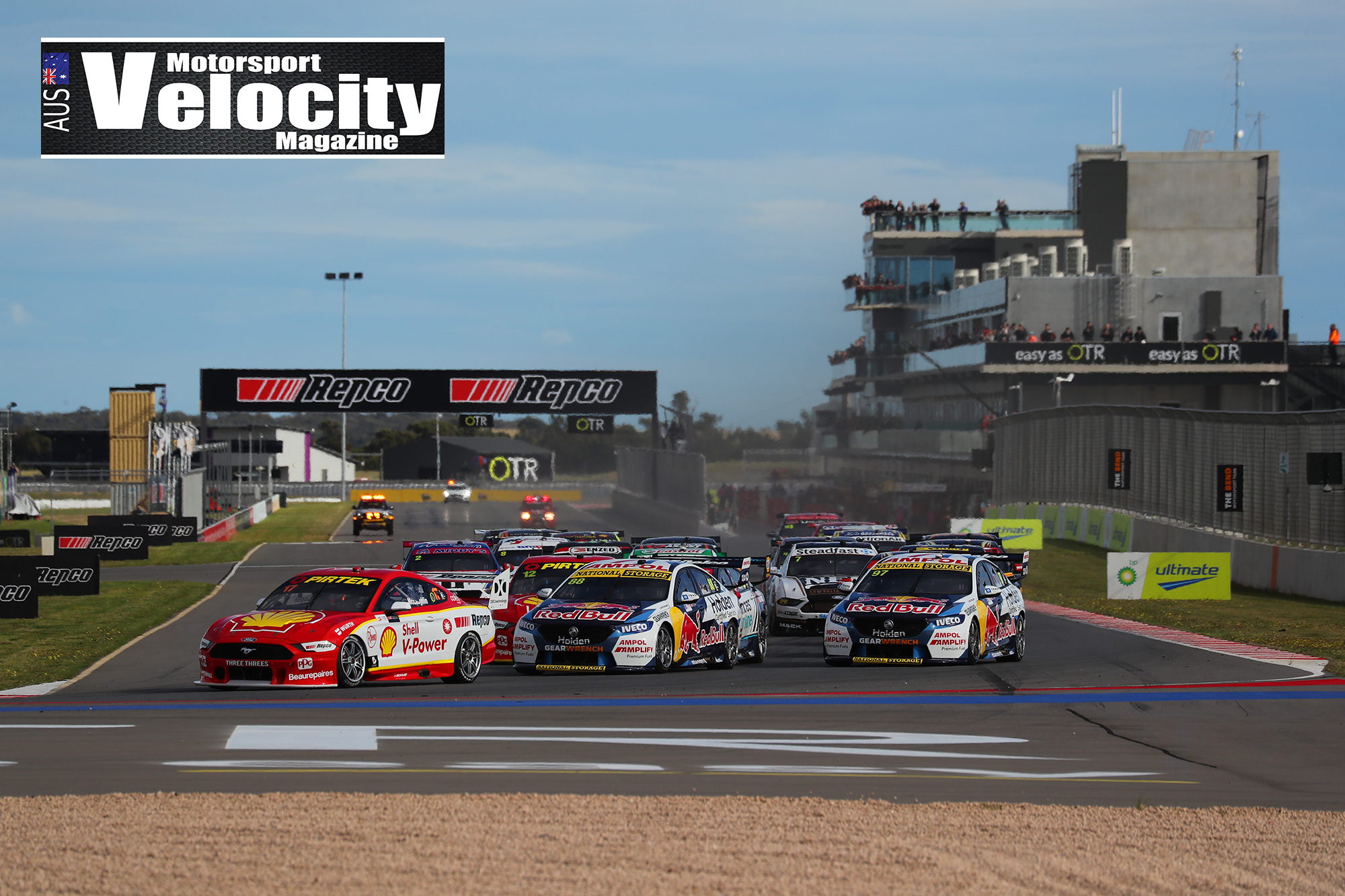 Fabian Coulthard broke a 41 race winless streak with victory in an action packed Race 25 of the 2020 Virgin Australian Supecars Championship from Jack Le Brocq and rookie Bryce Fullwood. For Championship frontrunners; Scott McLaughlin and Jamie Whincup along with Shane van Gisbergen it was a race to forget after each had sniffed the scent of the lead during different stages of the race.

Chaz Mostert scored his first pole position for WAU at The Bend Motorsport Park, with championship leader Scott McLaughlin alongside. The Red Bull Holden Racing Team locked out the second row with Coulthard and De Pasquale on row 3.

McLaughlin judged the start to perfection, while Mostert appeared to bog down momentarily off the line, which dropped the WAU Commodore back into the clutches of Whincup and van Gisbergen. The #88 Commodore moved into second by the time the field reached the first turn, with van Gisbergen pressing the rear of Mostert/s car. Mostert became sandwiched between the two RDHRT cars at the exit of 3 as van Gisbergen ranged up to Mostert’s left, which gave the #97 just enough room to squeeze up the inside at turn 5.  McLaughlin led at turn 6 from Whincup, van Gisbergen, Mostert, Anton De Pasquale, Coulthard, Le Brocq, Rick Kelly, Andre Heimgartner and Cameron Waters.

Whincup clawed onto the back bumper of the Shell V-Power Mustang any turn 15 and looked to press for the lead. Scott McLaughlin was slightly slower out of turn 16 and drove defensively in the run downhill to the penultimate corner. He left a small gap on the inside of the corner and Whincup lunged. A slight lock up of the left rear saw the RBHRT Commodore step out at the rear and made just enough contact with McLaughlin as the pair turned into the corner to spin the Shell V-Power Mustang off the track. Whincup also ran off the circuit, which allowed Shan van Gisbergen to snatch the lead. Whincup resumed in 10th while McLaughlin plummeted down to 18th at the conclusion of the opening lap. Race Control responded swiftly with a 15 second time penalty for Whincup.

Waters had moved up to 7th by lap 4 and closed on Heimgartner until friendly fire from teammate Lee Holdsworth saw the Monster Energy Mustang drop 4 places when Waters was pushed wide at the final corner.

Mostert and Coulthard entered the pit lane line astern for their compulsory stop on lap 8 and were both undercut by LeBrocq, who had been among the first to visit the pitlane and subsequently held the effective race lead. Shane van Gisbergen stopped on the following lap and returned to the track some 50 metres ahead of Le Brocq.

Rick Kelly’s Castrol sponsored Mustang had shown a good turn of speed during the first half of the race and managed to move past De Pasquale and into the lead of the race on lap 10 of 24. Waters had recovered from his earlier ‘off’ to run in 3rd from Percat, Pye, Reynolds, Jacobson, Davison and Smith. Shane van Gsbergen was the first of those who had made their compulsory stop in 12th place.

Chaz Mostert’s qualifying pace had vanished during the second portion of the race as the WAU Commodore slipped back down the field on the second set of rubber. Coulthard took 5th from his on lap 14 and Holdsworth moved past soon after, which then saw Mostert come under threat from Heimgartner in the Kelly Racing Mustang. Mostert’s slide was somewhat arrested when teammate Bryce Fullwood managed to push past Heimgartner and rode ‘shotgun’ for his team leader.

By Lap 14 Scott Pye had moved into the top position from James Courtney, though the pair were also the only drivers who had not yet visited the pit lane. Shane van Gisbergen held 3rd from Le Brocq, Coulthard, Holdsworth, Mostert, Fullwood, Heimgartner and McLaughlin. Pye and Courtney eventually completed the pit stop cycle and dropped to 12th and 15th respectively.

Fullwood dropped his teammate to 8th on lap 15, which opened the floodgates once more for the struggling Mostert. A forceful move from Heimgartner at turn 17 saw the Mustang and Commodore come to blows a couple of times as the jockeyed for position on the short run to the final corner. Heimgartner surged into 8th on the pit straight as McLaughlin and then Rick Kelly both past the #25 on the long run down to the first corner. 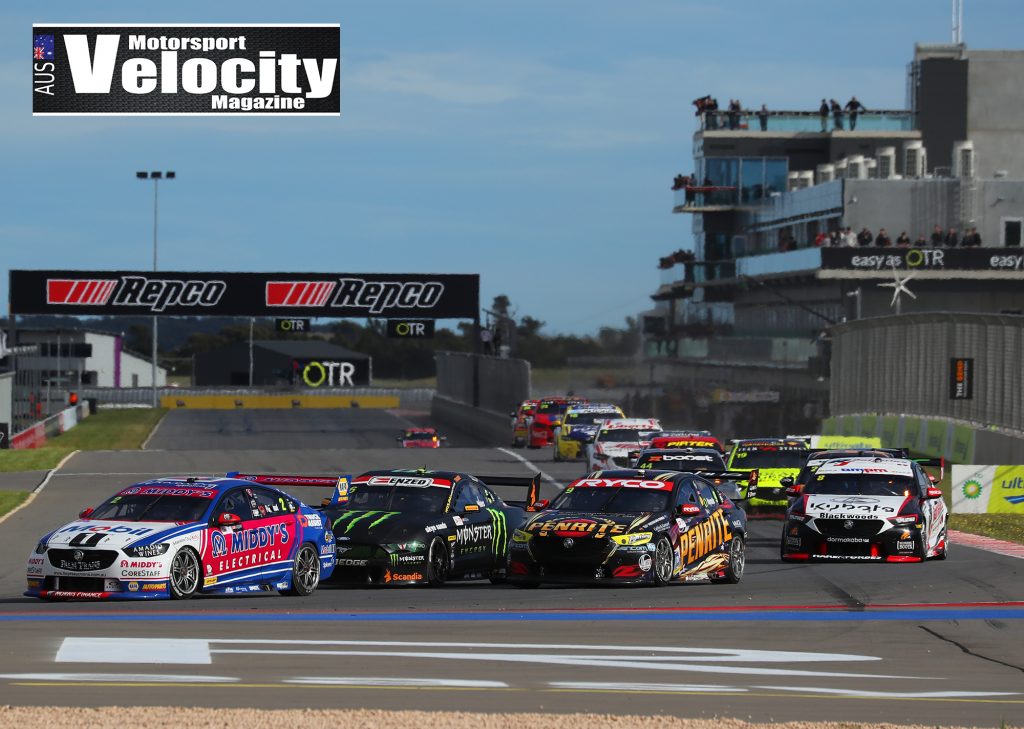 Le Brocq sensed the opportunity to take the win as the race moved towards the final quarter. He tried a switchback move at the exit of turn 14 which forced van Gisbergen into a slide as he powered out of the corner to protect his race lead. Le Brocq pushed again and took the lead at turn 17, though van Gisbergen was not prepared to concede and did his own switchback, which gave the RBHRT driver the inside line at the final corner and he simply ran the Supecheap Auto Mustang out of road on the entry to the pit straight. LeBrocq jostled with his car as he ran onto the grass and had to counter the effect of the ripple strip that grabbed at the front splitter of his Mustang. Fabian Coulthard pounced on Le Brocq’s misfortune to grab 2nd place down the straight.

Shane van Gisbergen fought doggedly to maintain the lead on well worn tyres and inadvertently brought Coulthard, Le Brocq, Holdsworth and McLaughlin into a five way battle for the win. The race leader received a brief respite on lap 21 when Le Brocq dove down the inside of Coulthard for 2nd at turn 5 and ran slightly wide in the process, which allowed Holdsworth to have a look at 3rd on the run to turn 6.

The race was turned on its head as the leaders approached turn 14 with just over 2 laps left. McLaughlin lunged up the inside of Holdsworth on the approach to the corner only to make contact with the left rear of the Truck Assist Mustang. Holdsworth spun and Race Control responded with a 15 second penalty for the Championship leader.

Le Brocq tried another ill-fated move around the outside of van Gisbergen at turn 17 which compromised the exit speed for both cars and enabled Coulthard to enter the pit straight alongside van Gisbergen. With no chance to move over to the inside line, van Gisbergen was easy prey for the #12 Shell V-Power Mustang and Coulthard moved into the lead. Le Brocq also pushed inside the Red Bull Holden Racing Team Commodore and ran side by side through the following corners before making the decisive pass at turn 3.

Van Gisbergen was clearly finding it difficult to find grip in the final laps and dropped to 5th after moves from McLaughlin and Fullwood. The latter pass at turn 14 saw van Gisbergen swallowed up by a trio of Mustangs, as Heimgartner, Kelly and then Waters all moved ahead in the space of a few hundred metres.

Fabian Coulthard held on to take the win in 41 races from Le Brocq and Fullwood. Heimgartner, Waters, Kelly, Pye, De Pasquale, van Gisbergen and Courtney rounded out the top 10. McLaughlin dropped to 15th after his time penalty had been applied.

“41 is a long time ago, My 200th round start as well. To get a win is awesome,” Coulthard told Fox Sports. “Got to thank my guys; Little Marky got my car working good, so we bided our time there at the end. We can always improve it, so I’m looking forward to tomorrow. We proved that we’ve got a good race car. I made a small error in the shootout, but I think we’re good.”

Third place for Bryce Fullwood marked a first podium in the Virgin Australia Supercars Championship for the rookie driver and he was justifiably pleased with the result.

“I’m absolutely speechless,” Fullwood admitted to Fox Sports. “I didn’t think we’d be taking trophies home this year. I was just stoked getting into the Top 10 shootout. There was stuff flying everywhere in that race to be brutally honest. Really cool, pretty unbelievable.”

For Scott McLaughlin the end result was bitterly disappointing after he had recovered brilliantly from the first lap incident with Jamie Whincup.

“It’s racing, I knew we were going to crash,” McLaughlin said of the incident with Whincup to Fox Sports. “I tried to give him room to do it, but obviously he must have hit the inside and locked a wheel and hit me. I pretty much knew that he was probably going to be penalised after that so it was about me trying to maximise what I had from then on and I felt that I was doing that. The move on Holdsworth for me was on and I had a crack. I wanted to get on the podium with my teammate, congrats to Fabian for the win, but for some reason the Stewards didn’t agree with it.”