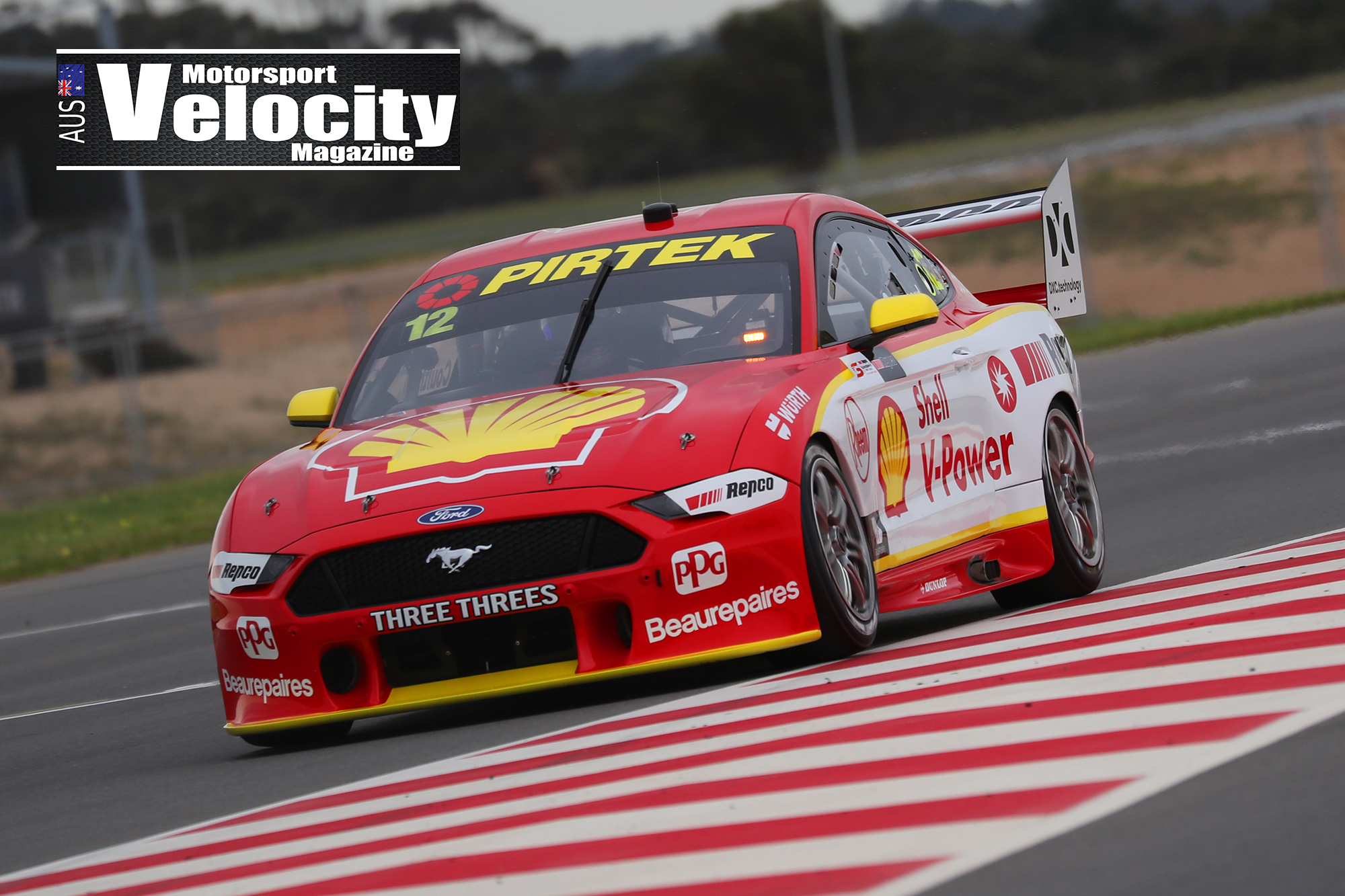 RACE 25 RECAP
Coulthard celebrated his 200th Supercars Championship round in style by winning Race 25 at the Repco SuperSprint The Bend.

The Shell V-Power Racing Team Ford Mustangs had good qualifying pace today with both cruising through to the Top 15 Shootout despite slightly damp and changing conditions.

McLaughlin clocked a time quick enough for P2, just five-thousandths of a second away from pole position. Despite a lockup through turn six, Coulthard was fast enough for P5, his best qualifying at The Bend.

McLaughlin had another superb start off the line, but a clutch slip for pole-sitter Mostert meant to two Red Bull, cars which started on the second row, were quick to move up and put the pressure on the No. 17.

McLaughlin’s lead was short-lived when Whincup made contact as he lunged up the inside on the entry to turn 17 and sent them both into the dirt. While Whincup was handed 15-second time for a driving infringement, it was little consolation for McLaughlin who found himself down in P18. With the two race leaders off the track, Coulthard moved up to P4 on the opening lap. 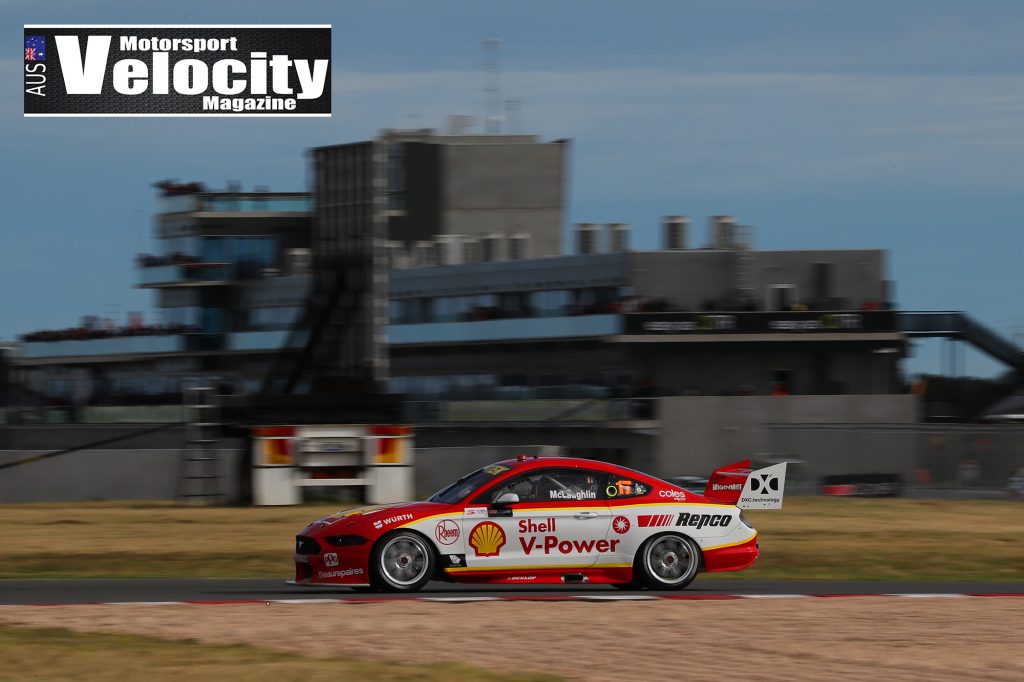 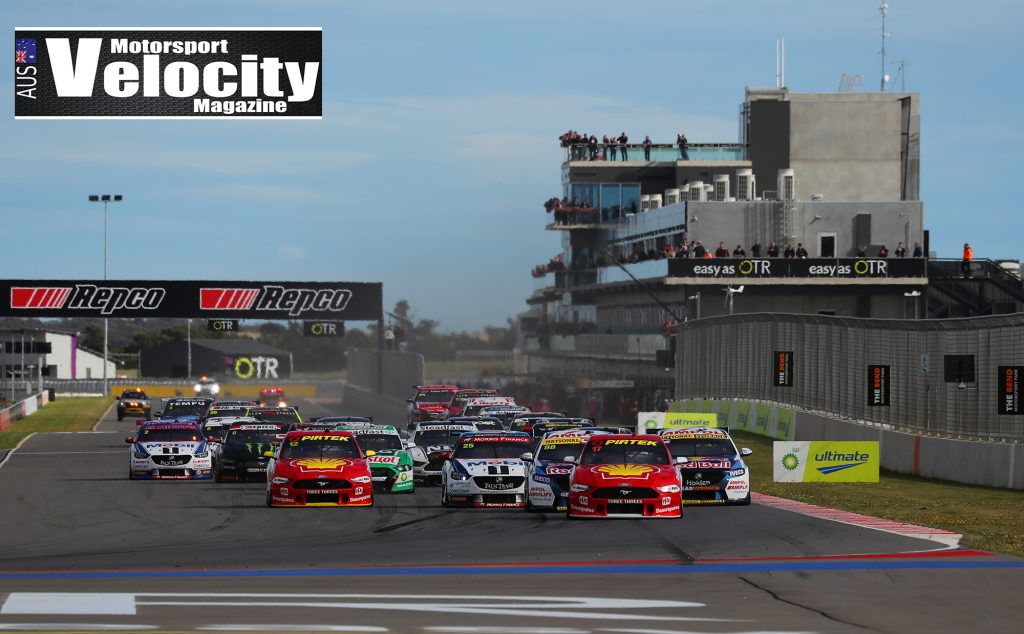 McLaughlin pitted early on lap 6 to try and give himself some fresh air and salvage a result. He took on two fresh tyres during his stop and rejoined in P22. Coulthard pitted just two laps later and almost jumped Mostert when the WAUR stalled in pit lane. He slotted in behind and rejoined the race P16.

On lap 13, Coulthard’s battle with Mostert continued and he was able to pass at turn 18 putting him effectively in a podium position. Meanwhile, McLaughlin had fought his way back into the top 10 with cars ahead still to stop.

On lap 18, Le Brocq was challenging van Gisbergen for the race lead but ran wide, opening the door for Coulthard to move up to P2. Van Gisbergen was struggling with tyres, and Coulthard was just 0.3 seconds behind.

With serious race pace, McLaughlin had made a stunning comeback and had made his way up to P5. With just 4 laps remaining, he was only 1.5 seconds off the lead.

It was a sensational end to Race 25. Coulthard dropped back to P3 before making his way past both Le Brocq and van Gisbergen and into the race lead. He powered ahead and claimed the win.

McLaughlin continued to march forward and up to P3, but there was a question over contact he made with Holdsworth on his way there. McLaughlin was handed a 15-second time penalty and while he crossed the finish line in P3, his official finish was P15.

COULTHARD QUOTE
“Today was an awesome way to finish 200 round starts, and it was a lot of fun. I said to the guys that even if I didn’t win the race was still a lot of fun.”

“To get a win was awesome and I can’t thank my guys enough. We can always improve and make the car better so I’m looking forward to tomorrow. I made a small error in the shootout but we had a really good race car.”

“It was a good, clean and fair battle, and I think it made some great TV.

McLAUGHLIN QUOTE
“I knew Jamie was going to have a crack on that opening lap and I tried to give him the room to do it, but he must have hit the inside and lost a wheel and hit me. I pretty much knew he would be probably be penalised after that, so it was about me trying to maximise what I had from there on. I felt like we were doing that.”

“For me, the move on Holdsworth was on and I had a crack. I wanted to try and get on the podium with my team mate – and congratulation to Fabian for the win – but for some reason the stewards didn’t agree with it.”

“I fully understand being in control of your car and diving down the inside, but the whole time I was completely in control and there was no lockup. The guy on the outside has to give you some space, and I was stuck on the inside and couldn’t go any further left, so what could I do?”