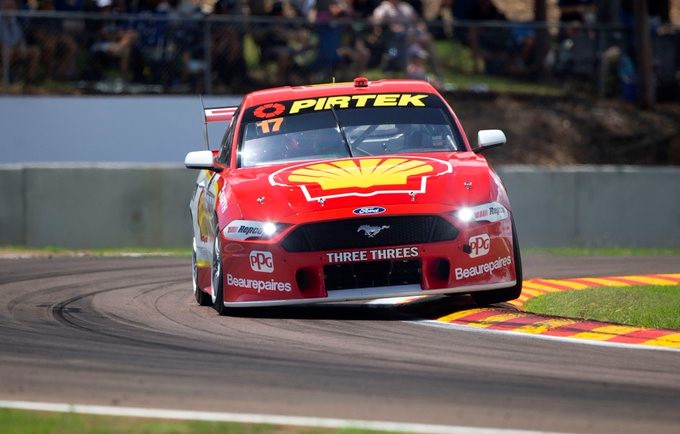 It was great to be back on the track on the weekend in the Darwin heat – and there was a lot to like for what happened with the #17 Ford Mustang.

We swept the three qualifying sessions to secure three pole positions – so our speed is awesome.

We won one race and finished second in another to continue to hold a nice buffer in the championship lead.

And then there was Saturday’s opening race – which was my blue on the restart. But we’ll get to that.

Just to be back racing was great – it took a while with the quarantine enforced postponement of the event, but to be trackside Saturday morning with fans on the hill gave everyone in pitlane a huge boost.

The Victorian based teams are doing it tough – to be away from family and friends and their home for such a long time is a really difficult thing – so to be back racing was the best thing we can all be doing.

The top end is stickier this year – we were supposed to be here one month ago when it’s still warm, but not nearly as humid. It ensured a real reality check in the car on Saturday – man, it was hot!

It doesn’t matter how much training or sitting in a sauna you do to prepare for running at Hidden Valley, it’s not until you hop in the car that bam, the heat gets you!

I’d like to blame the heat for my error on Saturday in the race – but it was just a mistake.

I made a great restart and Courtney in front didn’t and before I knew it I was in front of him before the control line. I knew straight away it was wrong – I redressed by turn one but was waiting for the boys to call through to let me know we had a penalty.

In the end with a 15 second time penalty relegated us to a finishing position of 20th – and I had to cop that on the chin – and I promised the crew I’d make amends on Sunday.

Thankfully we did that.

Two poles straight away in Sunday qualifying was enormously satisfying, and then we got the win in the first race. We got a tad lucky with an error by my teammate Fabian and Jamie was hot on our heels – but to get a trophy was great.

Jamie then got one back in the second Sunday race – and I finished second surrounded by Red Bulls.

And our championship lead is still a healthy 101 points, and Shell V-Power Racing holds a 30 point lead over 888 in the teams’ standings – so things are good.

We stay in Darwin this week and will run again this weekend, before heading straight for Townsville for back to back events in far north Queensland. So all up we’re running four straight weekends – which is serious NASCAR spec – I love it!

It will be a serious grind though for the boys and girls in pitlane – so you hate to see days like Saturday for the BJR crew where they tore up so much gear.

Away from the track – it’s cool to see the footy also up in Darwin this weekend, it’s a massive weekend here with Friday and Saturday night AFL, the Supercars on track & the election up here as well.

I’ve hit my good mate Jack Riewoldt from Richmond up for tickets, so the boys and I will try and get to the Dreamtime game between the Bombers and Tigers on Saturday after our race.

I’d hate to be playing a game of footy with the humidity up here at the moment – Jacky boy is a Tasmanian so he’ll be rolling with some serious red cheeks out there!

Also, keep an eye out for the Indianapolis 500 on Sunday morning our time. I was lucky enough to go to the 100th running of the 500 four years ago where there was a raceday Sunday crowd of 400,000 – how weird it will be this year with not a person in the stands.

Hope it’s a successful weekend for all of the Penske guys right across the globe!