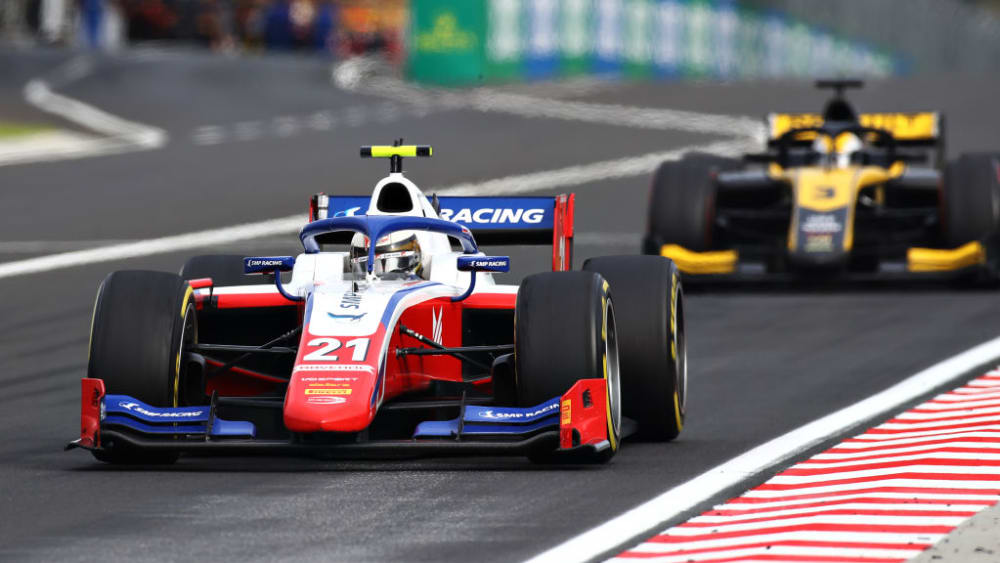 THE STORY SO FAR FOR F2

An enthralling 2020 season has given us five different race winners in the opening three rounds. Last time out in Budapest, rapid Russian rookie Robert Shwartzman earned his second victory this campaign, before Luca Ghiotto showed all his experience to take his first win of the year.

Wet weather in Hungary had the paddock scratching their heads on Friday as strategies were planned and re-planned. Half the grid opted not to set lap times during Free Practice, which saw BWT HWA RACELAB’s Giuliano Alesi go fastest in tricky conditions. Callum Ilott then revelled in the rain during Qualifying to take pole position for UNI-Virtuosi.

Tactics and tyre deg were crucial during Saturday’s action-packed Feature Race. Shwartzman started superbly from P11, opting for the alternate strategy that saw him carve through the field to build an incredible lead by the time he crossed the line. His PREMA teammate Mick Schumacher, on the opposite strategy, fought valiantly to come home third after some late drama. Between them, in second place, was Hitech’s Nikita Mazepin after an amazing surge secured a first F2 podium for both driver and team.

Degradation also proved critical on Sunday. The Sprint Race has no mandatory pitstop but, as most drivers stopped for new tyres, Ghiotto was one of only two racers to stay out. The Italian did just enough to prevent Ilott, who was 5s per lap quicker on fresh rubber, from passing him on the final lap to claim victory. Schumacher made it back-to-back podiums in third.

Consecutive Feature Race victories for Shwartzman (81 pts) extends his lead in the Drivers’ Championship. Ilott (63) has moved up into second place, while Christian Lundgaard (43) occupies third. Schumacher (39) is four points further back in fourth, with Dan Ticktum (38) in fifth.

58-points from the Hungaroring sees PREMA Racing (120) climb to first in the Teams’ Championship. UNI-Virtuosi (94) are in second place, with ART Grand Prix (77) dropping into third. Hitech Grand Prix (54) and DAMS (41) sit fourth and fifth, respectively.

Teams will compete using a combination of Pirelli’s hard and medium compounds for the first time this season at Silverstone. A popular ‘Drivers’ circuit’, requiring a good mix of pace and precision, the track is one of the fastest on the calendar. If what we’ve seen so far this season is anything to go by, it promises to be yet another exciting F2 weekend.

“Silverstone is one of the fastest tracks on the calendar. I love the sweeping sections of Maggots and Becketts, Brooklands into Luffield, and Stowe. They’re classic corners. It’s a place I know well and feels a bit like home. Winning the Sprint Race last year by pulling off a couple of really cool overtakes, and seeing the crowd getting so into it was awesome.

“It’s a high-speed track which usually demands a high-downforce setup, but you’ve also got some long straights, so for overtaking chances you need to trim out some of that downforce and maximise your straight-line speed. As a driver, it’s about getting a car you’re comfortable with and can throw around into those corners.

“Tyre management is important. Last year I had to hold back before starting to turn the screw and increase the pace towards the end. That was because we were limited by tyre wear. It’s usually on the front left, so you have to watch that.

“Turn 3 is a good overtaking spot, especially if you get a run coming out of the last corner. It’s wide, so you can choose lots of different lines, and it goes immediately into another tight corner in Turn 4. Turn 6 comes after a DRS zone. It’s where I pulled off my move last year to win the race. Likewise, you can go inside or outside. Finally, there’s the end of the straight going into Stowe – another DRS zone. You have to be quick through Maggots and Becketts though. It’s quite hard to follow a car through that section.

“I hope we can make a step forward as a team. We’re going to have changes in place, and I’m hoping to put on a good show for my home crowd, even if they’re not physically at the circuit.”

“It’s been a very interesting start to the season in Formula 2, especially thanks to the performance of the new 18-inch tyres and the impact they have had on strategy. Moving onto another double-header, we have again looked to mix up the tyre nominations for each weekend in F2 to add an extra element of unpredictability. We have to keep the hard choice during both weekends for F2, but we do have some flexibility with the softer tyre – moving from medium at the first race to soft at the second race. This presents a different challenge for the drivers in terms of lap preparation and higher ultimate performance.”

THE STORY SO FAR FOR F3

It was Beckmann who set the pace during Friday’s Free Practice session, topping the timesheets in his Trident machine for the second time this season. Qualifying at the Hungaroring was another matter however, and in challenging track conditions ART’s Alex Smolyar beat all challengers for his maiden pole position.

The track was still damp on Saturday for the first race of the weekend, and there was drama right from the off. Pourchaire, the Championship’s youngest ever race winner at 16-years-old, showed composure beyond his years to grab the race lead after a collision between Smolyar and Logan Sargeant in front. The Frenchman forged ahead, building a gap and coming home first to make it back-to-back race wins. Championship leader Oscar Piastri finished second, with Sargeant third. 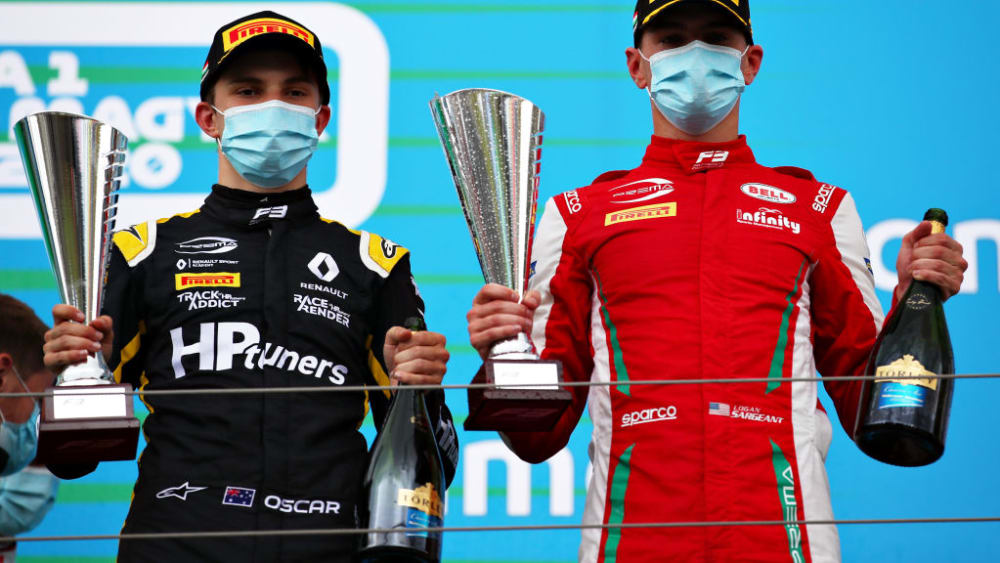 Wet weather returned for Sunday’s action, and although Beckmann began on reverse pole, MP Motorsport’s Bent Viscaal had no problem finding the grip to launch from P8 to take the lead. The Dutchman’s pace was incredible, but two mistakes eventually saw him penalised by the stewards and he tumbled down the order. Beckmann took the top step of the podium, joined by Piastri in second once again. Dennis Hauger grabbed his first Formula 3 podium in third place.

Piastri (76 pts) has pulled ahead in the Drivers’ Championship after another strong weekend, 26 points clear of the four drivers behind who are separated by just five points. Sargeant (50) is second, with Pourchaire (48) climbing to third. Beckmann (47.5) is in fourth, while Richard Verschoor (45) is fifth.

PREMA Racing (163.5 pts) have extended their lead in the Teams’ Championship, ahead of Trident (83.5) in second. 53 points from Hungary sees ART Grand Prix (81) climb to third. MP Motorsport (60) also move up into fourth place, with Hitech Grand Prix (44) slipping to fifth.

Popular with fans and drivers alike, Silverstone, famed for its high speeds, fast corners and long straights, plays host to Round 4 of the championship. With 30 cars set to battle it out around the former airfield on Pirelli’s hard compound tyre, we should be in for another thrilling instalment of F3 action.

“First of all, Silverstone is one of my favourite tracks to drive, and I think a lot of drivers would agree with me about that too. Plus, with it being a home race for me, it makes it that extra bit special.

“The circuit has been good to me, and my favourite memory here would be from 2018, when I took pole position and won the Formula Renault Eurocup race in front of my family and friends. I set the fastest lap too.

“As far as challenges go, I think that Silverstone has got a good mixture of low and high-speed corners, and to nail a lap around here is very tricky. As a result, it is very rewarding when you do it. Tyre management is always a part of the race and something to consider at most tracks, and Silverstone is no different. As drivers, we just have to manage it according to whatever situation we find ourselves in the race.

“I think there’s likely to be a lot of action after the DRS zones. They always open up opportunities to overtake. The track is also very wide in places, such as Turn 3 and Turn 6, and this gives us a lot of room to play with when it comes to lines and planning an overtake.

“As always, the aim is to win, and it would be pretty special to do it at my home track. We have a few things to get right with the car, but I have full belief that we can achieve this.”

“It’s been a very interesting start to the season in Formula 3. Moving onto another double-header, we have again looked to mix up the tyre nominations for each weekend to add an extra element of unpredictability. Due to the well-known severity of the Silverstone circuit, it’s not been possible to go any softer for F3, so we have the hard tyre for both weekends. This presents a challenge for the drivers in terms of lap preparation and higher ultimate performance.”