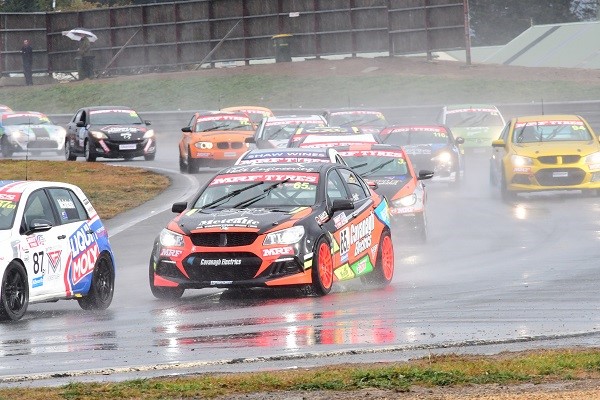 The MRF Tyres NSW Production Touring Car Championship has confirmed a healthy 29-car field for this weekend’s third round of the 2020 season at Sydney Motorsport Park.

Following on from his pair of outright race victories in the previous round at Wakefield Park, HSV Clubsport R8 driver Daniel Oosthuizen will be aiming to continue his winning form in Class A2, where he will do battle with Matt Holt. Other HSV representatives in Class A2 are Cary Morsink and former Super2/Super3 competitor Aaron Tebb, while Brent Howard will take on the Aussie machines in his E92 BMW M3.

The other outright race winner at Wakefield Park was Michael Sheargold, who will be hoping for more wet weather to exploit the strengths of his Mercedes A45 AMG. The Class A1 field also includes the very fast BMW M135i of Simon Hodges, Michael Kavich who takes over the Race for a Cure Mitsubishi Evo raced by his brother Ben at Wakefield, and young gun Jack Winter in his ex-CXC Racing Evo IX.

Reece McIntosh dominated Class B1 at Wakefield Park, taking advantage of the slippery conditions to chalk up an outright pole position in his VW Golf GTI. This weekend, McIntosh will face opposition from the experienced Peter O’Donnell (BMW 335i) and Darren Herbert (Mitsubishi Evo V). Making a return to the category is David Krusza, who slots into a BMW 135i after racing an E36 3 Series in the opening round in March.

Daniel D’Aquino continues to lead the overall standings after winning all three races in Class B2 at Wakefield Park aboard his VE Commodore SS. Along with Paul Pearson and Corrine Virag, the Class B2 line-up has been supplemented by the returning Bevan Tanner and Scott Sullivan in their Commodores, with Scott O’Meley flying the flag for the Blue Oval in his Falcon.

Former NSW PTC Champion Chris Reeves was the standout Class C performer at Wakefield Park, shining in the variable weather conditions and taking a pair of outright top-six finishes in his Volkswagen Scirocco. Reeves’ Class C rivals this weekend will be Adam Brew in his Audi TT Quattro and John Fitzgerald, who will steer the Garry Mennell-owned On Track Motorsport BMW 130i.

The COVID-19 restrictions will see a different race format adopted this weekend; open practice will be held on Friday, with qualifying and a trio of sprint races all to be held on Sunday.

While no spectators will be allowed at the venue, live commentary (and some limited vision) of the three races will be streamed on Sunday via the NSW Production Touring Facebook page.