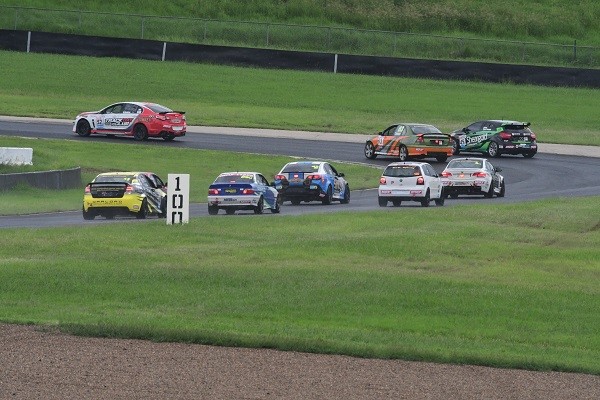 After more than four months on the sidelines, the 2020 MRF Tyres NSW Production Touring Car Championship will kick back into life at Wakefield Park this weekend, with a trio of sprint races making up Round 2 of the series.

Following an impressive performance in his newly built Holden VE Commodore SS in Round 1 of the championship at Sydney Motorsport Park in March, Daniel D’Aquino enters the weekend with the overall points lead, having dominated Class B2 at SMP. D’Aquino will face off against a pair of class rivals: Paul Pearson (VE Commodore SS-V) and Corrine Virag (VF Commodore SS-V Redline).

The Class C battle also promises to be intriguing, Reece McIntosh slotting back into his VW Golf GTI after starring in the wet races at SMP. McIntosh’s opposition in the class will consist of experienced racer Chris Reeves (VW Scirocco) and Adam Brew, who makes his first appearance in the category aboard an Audi TT.

In Class D, reigning champion Edan Thornburrow will be aiming to bounce back from a tough round at SMP aboard his Toyota 86; this weekend he will do battle with Michael Sherwell (also in a Toyota 86) and Mike Ferns (VW Polo GTI).

Class A2 will be hotly contested by club president Robert Coulthard (Monaro), along with Matt Holt and Daniel Oothuizen in their F-Series HSV Clubsports. Holt leads the class points and has a stout record at Wakefield Park that includes outright race victories.

Class A1 features an intriguing mixture of cars, including the BMW 1M of Tom Muller, Mercedes A45 AMG of Michael Sheargold, Mitsubishi Evo Xs of Ben Kavich and Stephen Thompson and Mitsubishi Evo IX of Gavin Holland. After recording consistent performances in the variable weather conditions at SMP, it’s Thompson who heads to Wakefield Park as the class leader and with more wet weather on the forecast this weekend, the all-wheel-drive machines could well enjoy a traction advantage.

The potentially slippery conditions could also suit the sole Class B1 entrant, Graeme Shaw who will race his older-model Mitsubishi Evo VI. While it may lack the outright performance of some of the newer cars, its sure-footed handling characteristics should allow Shaw to be competitive with the other turbocharged entries.

Making a welcome return to the category is Anthony Soole, representing Class X in his BMW M4. In terms of outright results, Soole’s car will be difficult to beat but he will be hoping for a change of fortune when it comes to reliability, having suffered a catastrophic engine failure in the car’s last outing at the Wakefield 300 in February.

In Class E will be Bruce Colbey, aboard a Chris Reeves-owned Suzuki Swift; while it may lack engine capacity, Colbey’s enthusiasm will ensure the Swift is nipping at the heels of cars in the faster classes, especially if it is wet.