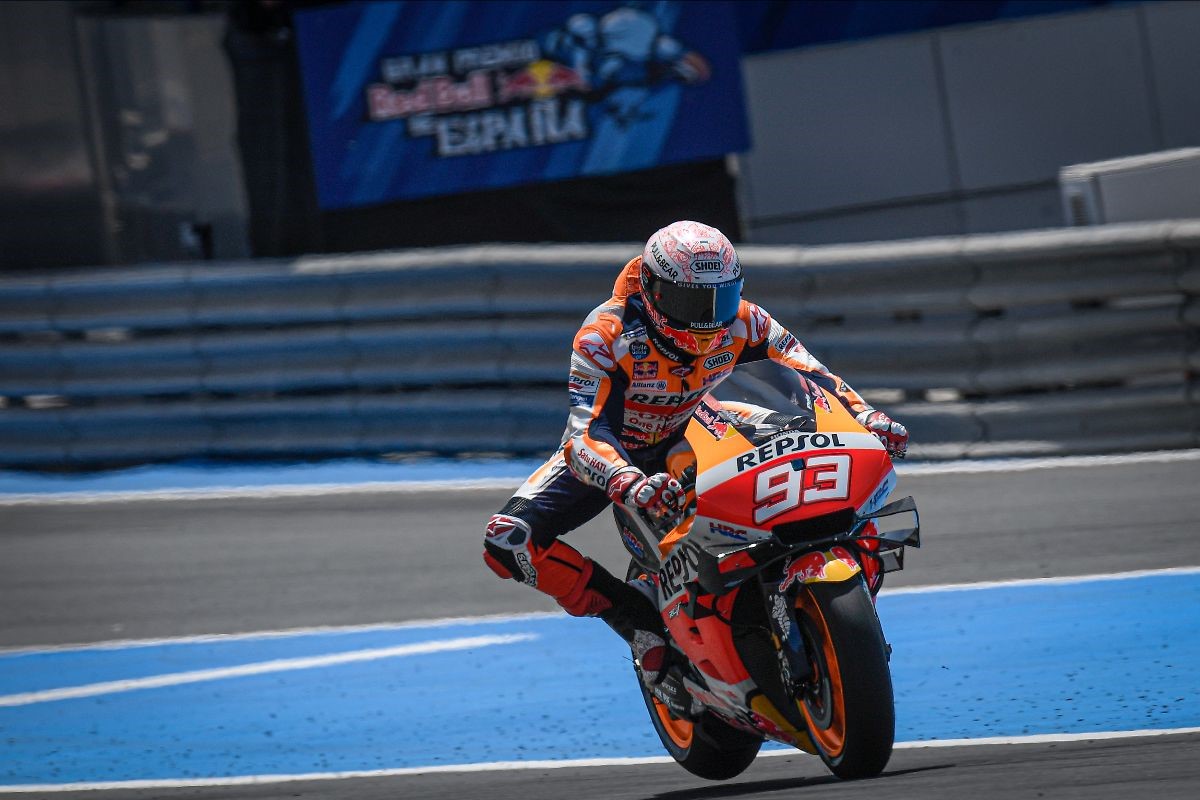 After setting the fastest time in the cooler FP1 conditions at the Gran Premio Red Bull de España, Marc Marquez (Repsol Honda Team) takes the opening Friday honours of 2020 as he remained fastest by the end of play – but it was far from an easy return to the top for the reigning Champion. Maverick Viñales (Monster Energy Yamaha MotoGP) was just 0.024 in arrears, and after having topped the last couple of tests, with Cal Crutchlow (LCR Honda Castrol) completing the top three less than a tenth off the top.

FP1 saw the action get underway as an eager Bradley Smith (Aprilia Racing Team Gresini) roared out of pitlane as the first MotoGP™ bike out in an official race weekend session this year, and the morning session was the one that would count most on the timesheets for most of the grid. Fabio Quartararo (Petronas Yamaha SRT) had to sit out the first 20 minutes of the session though, with the Frenchman given a penalty for training on “illegal” machinery – ie outside the regs – but by the end though the time attacks were underway full force, and it was Marquez who came out on top. With Viñales and Crutchlow so close, and Quartararo not yet having had the same running, the Jaws music need not start quite yet for the reigning Champion though.

In the afternoon it was Franco Morbidelli (Petronas Yamaha SRT) who proved the man to beat in FP2, but the times were a good eight tenths slower in a sweltering afternoon at the Circuito de Jerez-Angel Nieto. Quartararo was second in the more “race similar” conditions, and the only man to improve, with rookie Brad Binder putting in a stunner to put his Red Bull KTM Factory Racing machine inside the top three in the session and only a tenth off the top. FP2 also saw the first two race weekend crashes of the season: Marc Marquez and rookie teammate Alex Marquez (Repsol Honda Team), with both lowsiding out (separately) and unhurt.

Overall though, it’s Andrea Dovizioso (Ducati Team) who takes fourth as the veteran Italian really cranked up the pace after a more anonymous day on the Wednesday test timesheets, looking strong despite being on the way back from a collarbone injury, with Joan Mir (Team Suzuki Ecstar) turning the tables on more experienced teammate Alex Rins to complete the top five. Rins was seventh, just behind Jack Miller (Pramac Racing) as the Aussie stuck it in sixth.

Pol Espargaro (Red Bull KTM Factory Racing) took eighth in an impressive first day, and he led a trio of KTMs in the top ten overall on Friday. Rookie Iker Lecuona (Red Bull KTM Tech 3) put in an awesome performance to end up only 0.002 off the more experienced Espargaro and take ninth, with the aforementioned Brad Binder, as well as ending FP2 in third, doing an impressive enough job with his FP1 time to take tenth overall.

Johann Zarco (Reale Avintia Racing) was P11 after a solid day, ahead of Morbidelli on the combined timesheets, with Valentino Rossi (Monster Energy Yamaha MotoGP) next up in P13 on Friday. The ‘Doctor’ seemed to have a tougher time of it on Day 1, but remains the most recent winner for Yamaha at the track (from pole, in 2016) so he’ll be looking for more on Saturday. Takaaki Nakagami (LCR Honda Idemitsu) was fourteenth, with Quartararo ending the day in fifteenth and surely heading for a bounce back on Saturday.

Saturday begins at 9:55 (GMT +2) for MotoGP™ with FP3, which also welcomes in the riders’ last chance to move directly into Q2. With temperatures expected to be a little cooler in the morning, there could well be a big chance to improve – and the likes of Rossi and Quartararo will be top of the list for a time attack late in the session. Qualifying then begins at 14:10. (Local Time)

The second Moto2™ Friday of the 2020 season belonged to Luca Marini (Sky Racing Team VR46) at the Gran Premio Red Bull de España, the Italian topping the timesheets in FP1 and FP2 to lay down the gauntlet for his rivals. Thanks to his FP1 time, Jorge Navarro (HDR Heidrun Speed Up) sits P2 as the Spaniard splits the Sky Racing Team VR46 duo inside the top three, with Marco Bezzecchi third.

Much like it was in the MotoGP™ class, it was clear from the early stages that the Moto2™ riders were going to struggle to better their FP1 times that were set in cooler track temperatures of the morning. Ground temperatures were well into the 50s for the intermediate class, but Marini looked as comfortable as he did in the morning session. Both he and teammate Bezzecchi looked strong in both sessions on Friday, and they worked in tandem for a brief period in FP2. It wasn’t quite such a straightforward afternoon for the man second overall as Navarro’s bike suffered some sort of issue and the Spaniard had to pull to the side of the track down the back straight, a slight disruption to his FP2 running. Nevertheless, Navarro was able to get back out and finish P6 in the session itself.

After FP3 on Saturday morning, tune in for qualifying from from 15:10 (GMT +2) as the intermediate class prepare to decide a grid for the first time in a good while.

Gabriel Rodrigo (Kömmerling Gresini Moto3) matched the scorching Friday sun with some scorching Friday pace at the Gran Premio Red Bull de España, with the Argentinean breaking the lap record in the morning and completing the full set by topping the timesheets in FP2 to end the day over half a second clear. Raul Fernandez (Red Bull KTM Ajo) was second fastest overall, with John McPhee (Petronas Sprinta Racing) completing the top three only thousandths off the Spaniard in second.

It’s hot in July in Jerez, and that could be seen on the timesheets for much of the field as only a handful improved their laptimes in the afternoon. The top 12 – and Rodrigo’s record – remained unchanged in FP2, but there were only two crashers despite the hot pace overall: Ayumu Sasaki (Red Bull KTM Tech 3) in FP1 and 2019 Jerez winner Niccolo Antonelli (SIC58 Squadra Corse) in FP2, riders ok.

Sterilgarda Max Racing Team’s Romano Fenati put the new Husqvarna into a positive P11, only 0.003 off the top ten, and the Italian slotted in ahead of Valencia 2019 winner Sergio Garcia (Estrella Galicia 0,0). Tatsuki Suzuki (SIC58 Squadra Corse) was next up as the first on the timesheets to go quicker in the afternoon in P13 overall; his laptime in FP2 having put him second in that session. As it stands, Qatar podium finisher Ai Ogura (Honda Team Asia) holds the final provisional place in Q2 as he ended the day in fourteenth.