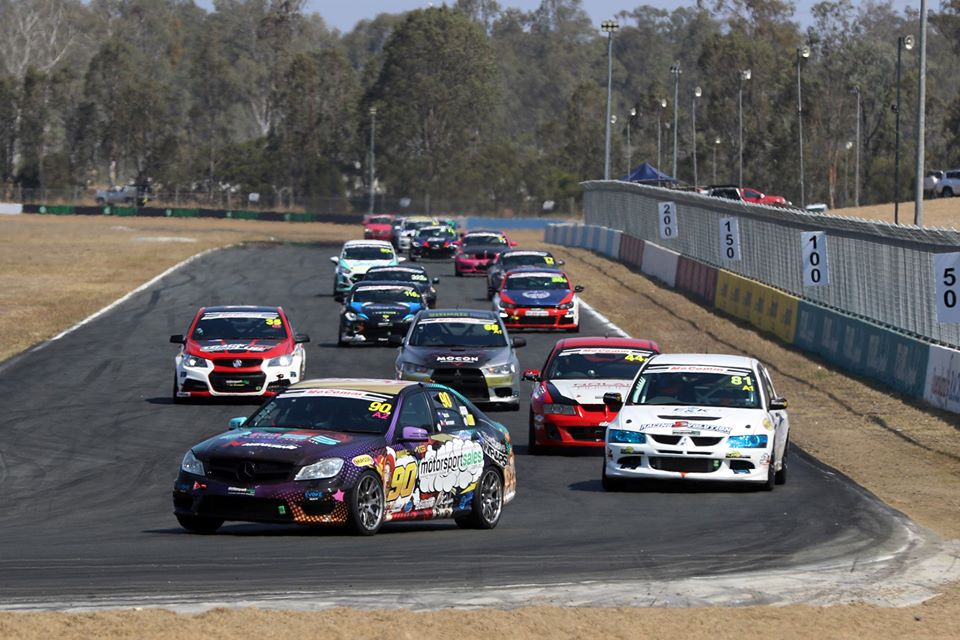 Six rounds, across three venues, with a mix of sprint and endurance racing, all squeezed into just over 16 weeks… that’s the task ahead, for the teams and drivers contesting the 2020 MotorsportSales.com.au Queensland Production Car Championship, after category management released a revised schedule for the 2020 season this week.

When the 2020 MotorsportSales.com.au QLD Production Car Championship commences, at Queensland Raceway, on August 15, it will be the first competitive outing for the championship in 286 days. November 3 was the last time the category went racing, on the day the 2019 season concluded, out at the Morgan Park Raceway in Warwick.

Since then, the coronavirus pandemic has taken centre stage, and wreaked havoc with the 2020 Queensland Motorsport Season. The season commenced in February, and two events were successfully put away before the virus, and the threat it posed to public welfare, saw a forced hiatus imposed on all sporting competition.

The weekend of March 28 and 29 was when the 2020 QPC Championship season was scheduled to commence, with the first of three trips to Morgan Park, but that event was cancelled on March 17, as we entered an unprecedented shutdown period.

It’s been a very long, frustrating wait for racing to resume, but we’re now just two months away from Season 2020 – TAKE 2.

Queensland Raceway will now host the opening round of the season, instead of Morgan Park, with the Willowbank venue the big winner of the revised calendar. The paperclip was originally scheduled to host just ONE round of the 2020 QPC season… it will now host HALF of the championship campaign.

While the iconic Lakeside Park is still locked in as the venue for the championship finale, it will now be three weeks later than originally scheduled, in a move that will push the Queensland Motorsport season into rarely charted territory – the first weekend of December.
Originally scheduled to host TWO championship events, the December 5 meeting will be the only time the QPC Championship visits the iconic Kurwongbah venue this year.
The date change also avoids an unwanted clash with the recently rescheduled Bathurst 6 Hour, at Mount Panorama.
Competitors from the Queensland Championship will be making the annual pilgrimage to the Mountain, to test themselves against the best the country has to offer, in Australia’s biggest production car race, which will be held on Saturday, November 14.

Warwick’s Morgan Park Raceway will host Rounds 2 and 5 of the championship, as the QLD Production Car Championship features on the Motorsport Australia Queensland State Championship card for the third year in succession.

With five months of racing lost, due to COVID-19, categories, venues and event organisers have been working tirelessly, to try and reschedule the 2020 season, in a bid to cram a nine-month calendar into 113 days, in order for championships to be completed, and champions to be crowned before Christmas.

Sadly, no less than SIX events have been scrapped from the 2020 Queensland Motorsport Calendar –FOUR of which were scheduled to host a round of the Queensland Production Car Championship. NONE of those six, originally due to take place between March 28 and July 19, have been rescheduled for later in the season, which has resulted in a complete overhaul of the 2020 QPC Calendar.

The most significant change comes from events being staged at Queensland Raceway and Lakeside Park, with all RACERS sanctioned race meetings to be staged over just ONE day, for the remainder of 2020.
That means four of the six championship rounds will be a single-day affair – all of those four are Saturday events – and, the move to single-day meetings, while unavoidable in the current climate, could prove to be a big talking point come December 5.

After the season opener, Queensland Raceway will play host to Rounds 3 (September 26), and 4 (October 10).

Sprint races will make up Rounds 1, 3 and 5 of the six-round championship, with endurance racing featuring prominently in Rounds 2, 4 and 6. All venues will stage ONE endurance round, while Lakeside misses out on sprint racing this year, as a consequence of the calendar reshuffle.

The biggest acquisition the category has made for 2020, is the Willowbank and Lakeside 300 events.
Previously, these two endurance races were run in-house, by Queensland Raceways, but after struggling to attract entries in 2018 and 2019 – the 2019 Lakeside 300 was cancelled – they’ve handed the event to the QLD Production Car Championship, with management promising a huge revival/rebirth of these iconic races.

The endurance round at Morgan Park will be a two-race affair, with a 60-minute twilight fixture on the Saturday afternoon (August 29), and a 40-minute mini-enduro on the Sunday morning.

Night racing has been an incredibly popular part of this category’s short history, and 2020 will see more night racing than ever before, with all three events at Queensland Raceway set to feature racing after sunset.

2020 is the fourth year of the Queensland Production Car Championship, and it promises to be the BIGGEST EVER!
It will also be the most gruelling, competitive and challenging season we’ve seen thus far. Just eight days of racing, but no less than six events, three venues, and there’s just 113 days between the first and last races of the campaign. The smallest gap between race meetings is 13 days, while the seven-week gap between the Willowbank 300, and the penultimate round of the season in Warwick, will be the longest break the drivers get during this campaign.
Sixteen races in total – 12 sprint races, 4 enduros, including the 300’s, which will be the longest races, so far, in category history. In total, you’ll see over 1000km of racing throughout the 113-day campaign.

Perhaps the most important factor, of this entire season, will be the impact of the one-day events. Drivers and Teams will have to be on their toes, and react very quickly, to anything that may go wrong… gone will be the opportunity to attend to any dramas overnight… it could be the one-day events that make or break campaigns for some drivers, but all of them are thoroughly looking forward to getting back on track, after an off-season that’s dragged on for far too long.