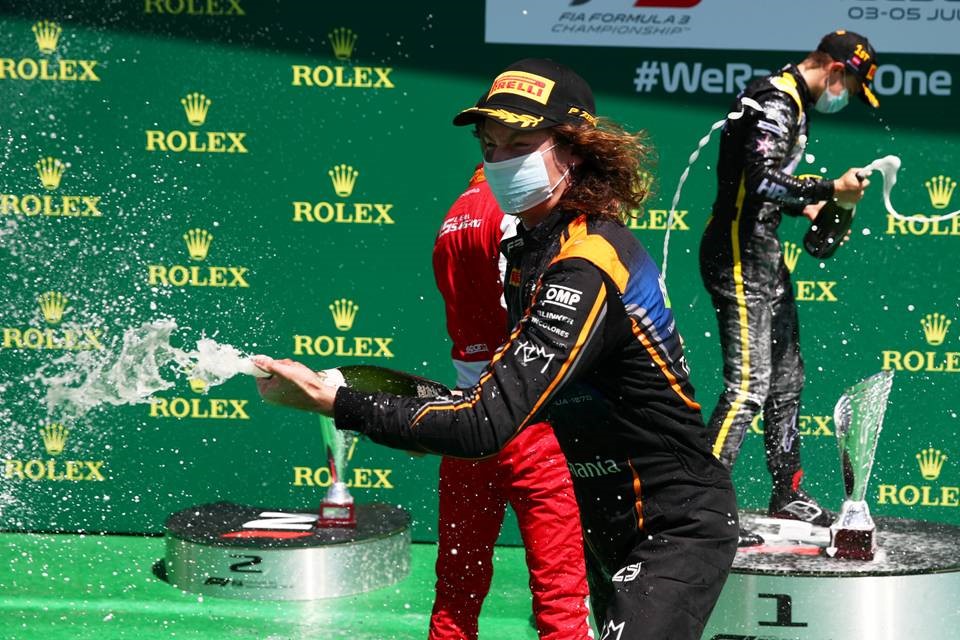 Alex Peroni is back, as fast as ever! That’s the clear message following the young Tasmanian’s strong performance in the opening round of this year’s FIA Formula 3 Championship at the Red Bull Ring in Austria.

Driving a Campos Racing entry, 20 year-old Peroni scored his breakthrough podium in the Formula 1 support series with third place in Saturday’s first of two heats. In the process he set the fastest lap in the 24-lap, 103km race.

Peroni was on course to add to his points tally in Sunday’s heat when his Dallara openwheel race car suddenly lost power on lap 11.

It was a highly encouraging return to racing for Peroni, whose career looked in doubt after he injured his back in a terrifying 250km/h crash last September in the FIA F3 Championship round at Monza, Italy. But any suspicions about his fitness or competitiveness were dispelled on Friday, when he qualified eighth fastest of the 30-strong international field of Formula 1 aspirants.

The following day he scythed up to third place by the chequered flag.

Peroni’s final overtake in the race showed that he’d lost none of his trademark skill and daring. He lunged boldly around the outside of a rival driver through one of the Red Bull Ring’s tight corners, and made the move stick.

With Saturday’s top 10 finishers lining up in reverse order for Sunday’s heat, Peroni comfortably maintained his eighth starting position ahead of Saturday race winner and fellow Aussie Oscar Piastri until his car failed.

Despite the disappointing conclusion, the Hobart-born racer was overjoyed to have posted his most competitive results since he graduated to the Formula 1 support series last year.

Peroni summed up the 2020 opening round as “an up and down weekend”.

“Qualy wasn’t ideal – I felt that we had the pace for fifth or fourth, but we paid the price for some small mistakes,” he said. “In race 1 my car was very quick in the first half, but the rear tyres lost grip as the race went on so I had to focus on defending my position instead of attacking the driver ahead.

“I felt that third place was the best I could have achieved from where I started. I was so happy to be on the podium and set the fastest race lap for the first time in FIA Formula 3, especially in the first race of this season!

“Today my car had what looks like a battery problem. There were warning signs at the corner before, with the DRS not working and some weird gearchanges, and then the whole car shut down.

“It was disappointing, as I was on target for more points, but these things happen. We’ll investigate the cause, and hope it doesn’t happen again.”

Peroni was cautiously optimistic about his prospects for the remaining rounds of the revised 2020 FIA Formula 3 Championship, which like Formula 1 will return to the Red Bull Ring next weekend for its second round.

“Overall it was a pretty decent start to the series,” he said. “It’s been a long wait since Monza, and then the extra delay because of the pandemic, but Campos Racing has done an incredible job to give me a car with the speed to compete at the front.

“I’m so pleased for everyone who’s supported me, even through some dark times last year. It feels good, but it’s only the first round and there’s a lot of racing to come.

“I’m already looking forward to round 2 here next weekend.”