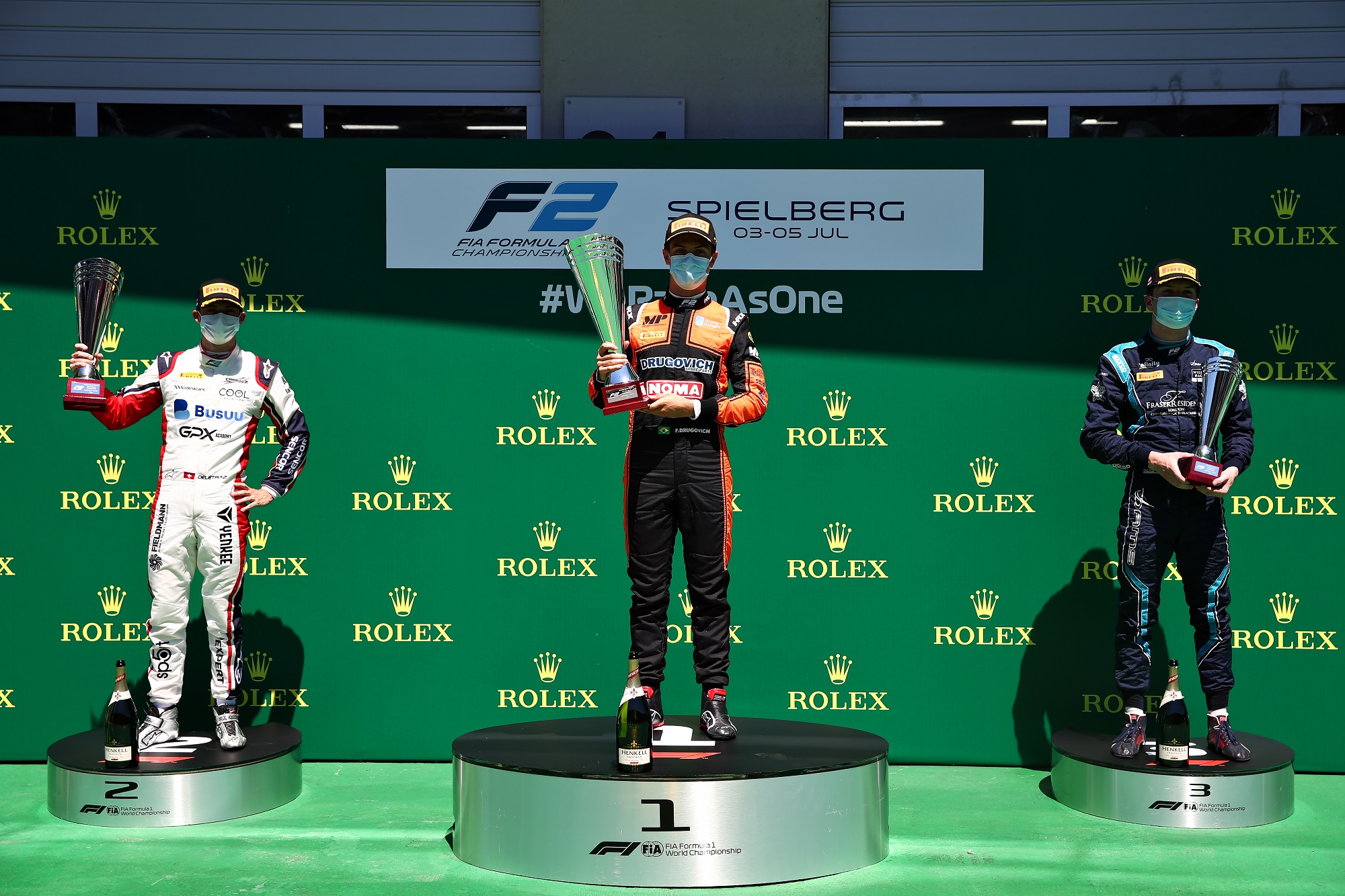 Felipe Drugovich capped off a sublime debut weekend in FIA Formula 2 by clinching his first victory in the Championship at the Red Bull Ring, in just his second race at this level.

The Brazilian drove like a seasoned F2 contender, belying his lack of experience in the Championship and overcoming not just one, but three race restarts as the safety car got plenty of laps under it’s belt.

Not even the pressure of the experienced Louis Delétraz breathing down his neck could unsettle the Brazilian, who rarely looked under the threat.

Enjoying his second front-row start in as many races, Drugovich took the lessons learned from a difficult debut on Saturday, when he struggled to defend, and put them to practice perfectly with an assured performance.

Delétraz would be forced to settle for second, while Dan Ticktum took his first ever podium in F2, benefitting from Marcus Armstrong’s woes, with the ART Grand Prix racer forced to retire from third.

Still reeling from his mistake on Saturday which cost him P2, Mick Schumacher will be pleased to have made up for this in part, taking his first points of the season in P6.

Feature Race winner Callum Ilott won’t be as happy with his second race of the year, losing the final points’ position to Jack Aitken, who had clawed his way up from 15th on the grid.

AS IT HAPPENED
Drugovich enjoyed the cleanest of getaways off the line, shrugging off an attack from Delétraz to sprint off into the distance. The Charouz racer was left to contend with Ticktum, as the DAMS racer pulled up alongside him.

The Swiss just about kept his place before Armstrong got him out of jail and stole the attention of Ticktum. The Kiwi had already claimed three places at the start and took a fourth with his lunge on the Briton.

Alesi was forced to pull over onto the grass from sixth as the back of his machine went up in smoke, bringing out the first safety car of the morning. There would be a second visit in quick succession, as Sean Gelael pulled over as well just as the safety car was getting ready to head back into the pits.

When the safety car did finally head back in, Drugovich aced his restart and pulled away without an inch of doubt. Delétraz was forced to fight off Armstrong, just about clinging onto P2.

The safety car would be required for a third time shortly after, as Ghiotto was spun around and beached himself on the gravel. Guanyu Zhou just about managed to swing around the spinning Hitech machine, but was forced wide and dropped to the back off the grid.

Once again, Drugovich nailed his restart, not even giving Delétraz a sniff of the race lead. Still, he’d need to do it for a third time as Armstrong became the race’s next casualty, losing power while in third place. Still Drugovich remained unfazed, holding off Delétraz when racing resumed once more.

With just a few laps remaining, the only movement in the top ten would come from Aitken, whose lunge ahead of Ilott handed him his first points of the season, after a tough opening weekend.

Drugovich was the first across the line, ahead of Delétraz and Ticktum. Shwartzman followed up P3 in the Feature Race with P4, ahead of Christian Lundgaard, Nobuharu Matsushita, Schumacher and Aitken.

Ilott leads the Drivers’ Championship after the first round with 27 points, four ahead of Robert Shwartzman with Drugovich sitting third, followed by Ticktum and Delétraz. In the Teams’ table, ART Grand Prix lead with 36 points, ahead of UNI-Virtuosi on 31 and MP Motorsport on 27. PREMA sit fourth ahead of DAMS In fifth.

“I am really happy with it. We had some issues yesterday and we were expecting a lot more after the Quali that we had, but today, I think that we got the job done.

“The car was awesome, and I could push how I wanted, so I am really happy and thankful to the team.”

The paddock will remain in the picturesque surroundings of Spielberg for the second round of the Championship next weekend. Shwartzman will look to pile the pressure onto fellow Ferrari junior Ilott from second following an impressive debut weekend.