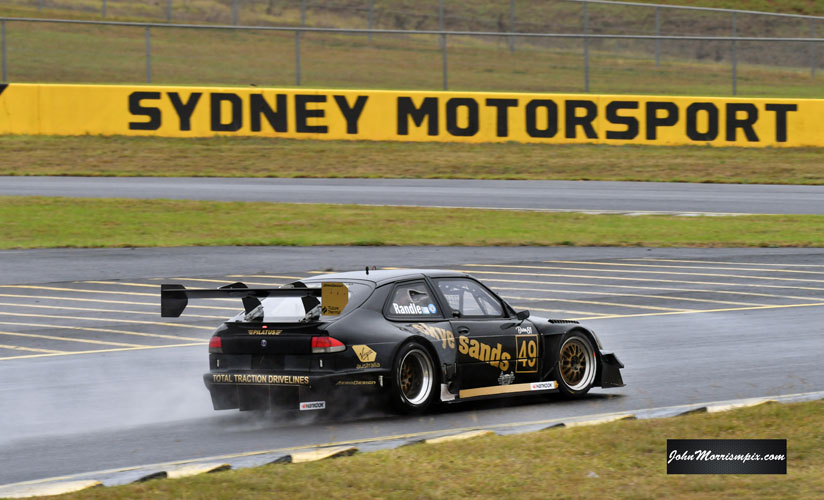 Day 1 of the Muscle Car Masters ran under grey skies and inclement weather. The day began under a steady drizzle of rain which was expected to ease as the day progressed. Despite the difficult conditions there were few incidents as drivers exercised caution on the wet surface.

See our photo gallery from this event here

The absence of series leader Jack Smith from the round, presented the opportunity for the chaser to gain the advantage, with Tyler Everingham and Zak Best hoping to take the series lead over the course of the weekend. Everingham claimed pole for race 1 from Jon McCorkindale, Zac Best and Brendan Strong. Strong was expected to be a non-starter for the first race after suffering from a right front tyre failure on the approach to turn 1. Strong elected to take the escape road towards the drag strip but caught the tyre bundle which snapped the car and damaged the right rear quarter and door. Strong’s small team did an outstanding job to have the car ready for race 1.

McCorkindale led the field into turn 2 as Everingham made a slow start and dropped to 4th. The MW White Falcon made a lunge under Strong into turn 2 and made some contact. Strong spun the black Commodore and dropped to the rear of the field. Everingham moved into the lead a few laps later as Strong climbed back to 8th at the finish. Zac Best move past McCorkindale or 2nd with Michael Anderson taking 4th.

Ash Tamasi put his Holden Calibra on pole position with Steven Lacey alongside. Championship contenders Tony Ricciardello and Thomas Randle were 3rd and 16th after Randle failed to record a time in qualifying.

Tamasi led the field away with Lacey and Ricciardello on close pursuit. The lead trio remained in formation for the opening laps while Thomas Randle forged through the field and soon joined the battle for the lead. As the others struggled to pass Tamasi Randle picked them off one at a time. Randle then drove away as Ricciardello and then Lacey eventually relegated Tamasi to 4th. Randle finished 1st from Ricciardello and Lacey.

Aaron Seton took pole for race 1 in the Trans Am/TA2 category and established a clear lead during the early laps of race 1. He was caught out by the greasy track at turn 3 and spun the Mustang. Seton then rolled the car down the hill to turn 4 as he moved away from the oncoming traffic and dropped back through the field. Ashley Jarvis took the lead and ran away to record a convincing win from a recovering Aaron Seton with Peter Robinson in 3rd.

Jarvis then recorded a flag to flag  victory in race 2 as Seton fell back to 11th. Russell Wright finished 2nd with Robinson 3rd.

Gregoary Keam and Norman Mogg shared the wins in their Mustang and Walkinshaw VL Commodore respectively. Bob Holden finished 3rd in race 1 in his Corolla while Frank Binding and Ed Singleton took the minor placing on a dryig track in rae 2.

Andrew Taite won both races in the Group N Historic category in his Chevrolet Camaro from Christopher Thomas in the Holden Torana XU1. Wayne Rogerson completed the podium in the Mazda RX2. David Wall qualifed 11th on well worn wet rubber, Wall explained that they were unable to source the unique tyre size from the trakeside tyre services and struggled to 4th adn 5th as a result.