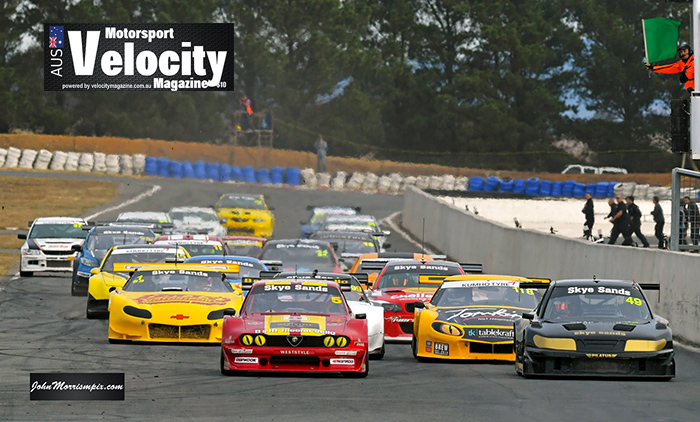 Dunlop Super2 driver Thomas Randle turned his attention to the National Sports Sedan series this weekend for round two at Wakefield park in the rural NSW town of Goulburn, racing the Skye Sands Saab 93.  The 24 car strong field were split into two groups for qualifying, Randle was in group B along with the 10 times previous Australian champion Tony Ricciardello whom topped the charts in his 6 litre Alfa Romeo GTV.

Randle went on to win Race 1 from Ricciardello who took the second race, Randle won the last trophy race from Steven Tamasi.

Thomas sent us his exclusive comments from his weekend win, “It was a fantastic weekend for the Skye Sands Saab Sports Sedan. We had some really great battles with Tony Ric throughout the weekend and to come away with the round win is just fantastic for the whole team. It’s the teams first round win since 2010 I believe, and the car was bulletproof across the weekend. Massive credit to all the crew from Dream Motorsport and a big thank you to my dad and Rusty French also. Looking forward to Muscle Car Masters in just under two weeks”.

In what has to be some of the best ever Australian Sports Sedan racing watch the Insane Alfa VS Saab Battle video here from Race One:

From our Weekend Race Report: (See that here)

Thomas Randle won the meeting as Tony Ricciardello encountered a problem in the final event. Ricciardello won the earlier race, the Alfa driver narrowly avoided an incident with Joseph Said when the Fiat driver spun to the outside of turn 3 and came back onto the track just metres from the leader.

Randle looked to drive around the outside of a slower starting Ricciardello in the final race. Steven Lacey also looked to move alongside the Alfa. The pair made contact into the braking area at turn 2. Tony limped back to the pits as Lacey stopped at the exit of the fish hook. The Safety Car then called for the stranded car as well as the John Spiteri Lancer, which had been pushed into the tyre wall at turn 1 with Chris Muscat. Muscat was able to limp into retirement, although Spiteri’s car remained against the tyres for the remainder of the race. Ricciardello dropped a lap as his car was inspected and then fought back through the field to finish 14th. Randle won from Steven Tamasi and Birol Cetin.