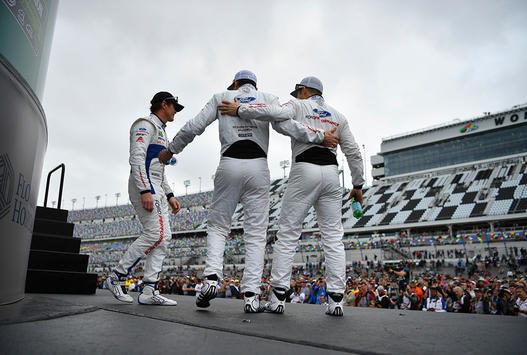 Heading into Sunday’s 102nd Indianapolis 500, we asked IMSA drivers to submit their predictions on who would drink the milk in victory lane at Indianapolis Motor Speedway on Sunday afternoon.  And if there’s one thing we learned, it’s that IMSA drivers are incredibly loyal to their teammates. So, without further ado, here are their somewhat “predictable” predictions:

“I really can’t pick anyone other than Scott Dixon for a few reasons. No. 1, he’s my teammate. We share the car and he’s one of my best mates in racing, for sure, and I just think he’s due. I think he should already have multiple Indy 500s to his name, more than just the one that he did win in 2008. I think he’s just one of the best IndyCar racers to have ever lived. If anyone can make it happen, he can with Chip Ganassi Racing, so I’m going to put my name on Scott Dixon.”

“My pick for the winner of the 2018 Indy 500 is Scott Dixon. I think he has the best chance of any of the Hondas and I would love to see him come back and get a win after that horrific accident in last year’s race!”

“My pick to win the 2018 Indy 500 is without a doubt Oriol Servia in the No. 64 Scuderia Corsa. He has a couple of the greatest teams combined backing him: Scuderia Corsa and Rahal Letterman-Lanigan and he brings an immense amount of experience and good judgement to the table. Two extremely important ingredients when trying to go 500 miles at Indianapolis Motor Speedway.”

“This is the first time I’m following Indy 500 closely and so far it has been so eventful! My family, Scuderia Corsa, is racing there with No. 64 driven by Oriol Servia. He has a great experience being his 10th Indy 500 on the books. The way he reacted on a challenging Saturday was amazing, they have been very fast all week so I’m sure they are targeting a top 10 result! Ed Carpenter was definitely quick in qualy but my pick for the win is Oriol Servia!”

“I am going with my endurance teammate Simon Pagenaud, also known as the “#FishLion!” He has been quick all month and qualified on the front row. Unfortunately, he has suffered the worst luck this year and what a place to turn that around than the Indy 500.”

“I am just hoping a Team Penske driver wins as I was able to do in 2015. All of them deserve it, but Helio (Castroneves) winning his fourth would be huge. That hasn’t happened in over 20 years when Rick Mears won his fourth for Roger Penske.”

“Helio Castroneves. He has the wisdom and experience at Indy. And now that his full-time job is driving a DPi in IMSA, he has something more to prove. The other drivers are there just hoping to win the Indy 500. Castroneves has been there and done it. He is going to prove that he’s still got it. He’s going to prove that IMSA racing has made him a better IndyCar driver.”

“Super excited for Ed Carpenter and his team on getting the pole and his chances for the win. But so hard to bet against the Penske cars that are littered throughout the top 10 and have been strongest every day in practice. And consistently the car that has had the edge is Helio. Combine that with all of his experience at that race – he is my choice!!”

“I think this year it will be Ed Carpenter who will take the win! Him and his team have been super quick at Indy and have done three pole positions so I hope he can win it this time by.”

“Obviously, I’m a big fan of Ryan (Hunter-Reay) after being teammates with him for a few years now in sports cars and getting to know him outside the car. So not only do I think he has a really good chance of winning, I’m really hoping this can be his year to get his second win in the 500. He was really strong there last year up until a mechanical problem. He always puts himself in position to race for the win at the end of the 500, so hopefully things can go his way.”

“Ryan will win the Indy 500. He’s won it before and seems to be close to winning it every year, ever since he’s been in that race, so it’s time for him to win again. Plus, he is our teammate for our endurance races, which makes him our favorite driver at Indy.”

“Spencer Pigot, because he’s an absolute beast! That dude has got heart, and he’s mega fast, and he’s a fellow Mazda boy which means he’s got that never stop challenging spirit in him. I’ve got a strong feeling about this one – everyone is surely in for a surprise.”

“Spencer Pigot. He’s young and hungry for success and clearly has a great team around him. Plus, he’s won at every level of the Mazda Road to Indy ladder so the last thing left is the 500!”

“I say Spencer Pigot, because not only does he have a cool first name, he also has cool initials.”

“I’m predicting a shock win for Robert Wickens. His rookie season so far has been stunning. At Indy anything can happen. Robert did his first endurance race together with Ben Keating in LMPC in the Rolex 24 two years ago. A great guy, and with his current form he might be able to fight the big guns. His teammate Hinchcliffe is not in the race, meaning the whole team will push for him. That can only help.”

“(Robert Wickens) made quite the impression during his IndyCar debut on the road course at St. Petersburg and again on his IndyCar oval debut at Phoenix. Robert and I worked for the same go-karting team as kids… he’s the real deal.”

“I’ll go with Sage (Karam). He’s my buddy and he loves that place!”

“My pick for the 500 is JR Hildebrand because he is the guy I am spotting for and a close friend. He’s had several good runs at Indy…almost won it. I think he’s got a great shot!”

I think this is Marco (Andretti)’s year. He’s been close before but hasn’t been able to pull off the win. I was at the race in 2006 and watched him lose by a nose. He was quick in practice and I think he’ll move up in the race.”

“I’m going with Zachary Claman De Melo, he’s my good friend and he’s shown to be very quick this past month. I wish him all the luck in the world.”