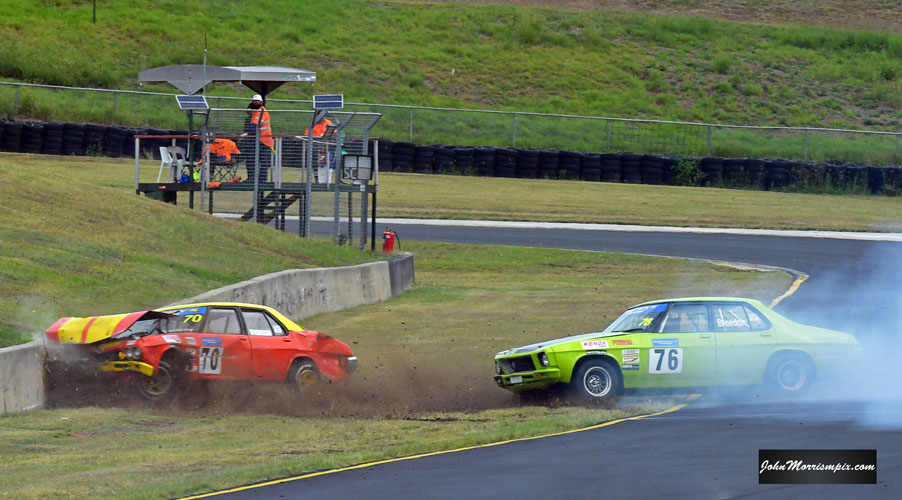 The second round of the New South Wales CAMS Motor Racing Championships has been run at Sydney Motorsport Park this past weekend, Velocity Motorsport magazine had John Morris on the ground photographing and reporting.  You can see a sample of Johns photos HERE, if you’d like to see more of your car please use the CONTACT US page.

Daniel Gaunt and Garry Higgon combined to win the Production Sport Endurance race at SMSP. The pair fought back from an early misadventure, when Higgon spun out of the lead at turn 2 early in the race. Gaunt managed to run down George Miedecke, who looked set for the win after the pit cycle drew to a close. The Miedecke Motorsport Aston Martin was fortunate to make the grid after the team had to have parts driven down from Port Macquarie after a radiator hose blew during Saturday qualifying.

Brett Strom took the lead after Higgon’s spin and drove away from the field until his pit stop. The team added lubricant to the car, which had left wafts of smoke around the circuit. Strom emerged from the pits marginally ahead of George Miedecke, who ran down the Marc Cars Mustang on the main straight. Miedecke in turn was also passed by a charging Daniel Gaunt, who went on to win by 4 seconds. Strom lost 3rd in the final laps to Brad Shiel, who ran with Miedecke for a while, but was unable to maintain the pace of the Aston Martin, Miedecke managed his way through lapped traffic superbly.

Steven Lacey won the race that mattered most with victory in the Sports Sedan trophy race. He jumped past Brad Shiels off the line and managed to establish a comfortable lead which he held to the finish. He was aided by Scott Reed, who looked for a way around the Shiel’s Fiat 124. The attention meant that Shiels was split between catching Lacey and maintaining 2nd from Reed. By the time Brad had made a gap on Reed, Lacey was too far ahead to catch. Simon Copping took 4th, with Grand Doulman rounding out the top 5.

Craig Sparke emerged victorious in an entralling final race for the Formula Vees. The race started with the top runner four wide on the run to turn 2. Dylan Thomas led early from Kinsella, Sparke, Aaron Lee, Stephen Butcher and Daren Williams. Butcher’s chances were dashed when Williams went into turn 2 too hot and spun the CGR Performance Stinger. Thomas, Sparke and Kinsella then traded places throughout the race, with Sparke getting the chequered flag in first. Michael Kinsella was 2nd and Thomas unlucky in 3rd. 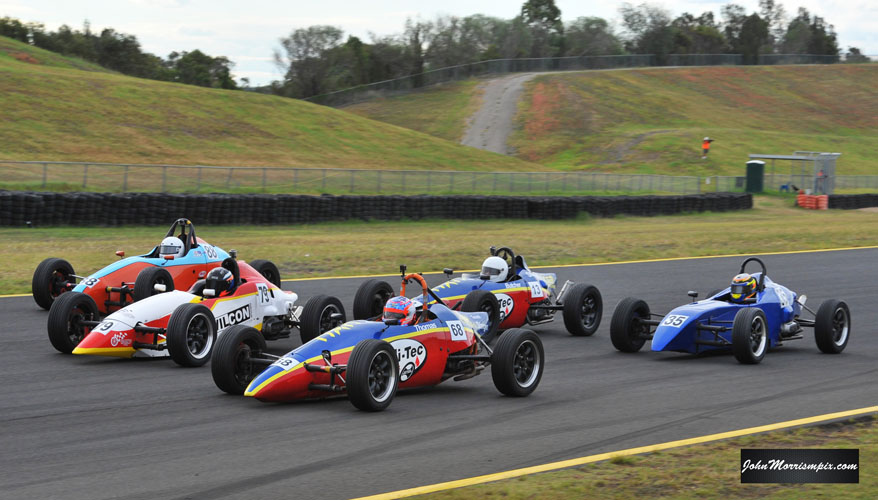 Brett Osborn won the final race of the weekend in the HQ category after a tense battle with Duane Cambridge and Chris Molle. Molle eventually too 2nd from Cambridge after a series of unsuccessful moves, including a run across the grass on the entry to turn 2. The trio quickly established a lead over the rest of the field which only grew as the race progressed. Anthony Camilleri took 4th from David Redgrove and Glenn Deering. (Main Story image: Wayne Harrison crashes at Turn One)

Jason Hendy was the trophy winner after Harrison Cooper had dominated the first day’s racing. Hendy took an early lead and Cooper fell back behind Bob Jowett and Mike Fitzgerald at the start. Hendy appeared to have a race winning lead by the time that Harrison had worked his way through the field. Cooper closed to withing striking distance, although an attempt for the lead saw Harrison drop away from Hendy again. Bob Jowett took 3rd from Kurt MacReady and Mike Fitzgerald.

Ray Hislop brought his imposing BF Falcon to SMSP and left with another winner’s trophy with a comfortable 7.5 second lead at the race end. Hie fastest lap was well over a second faster than his nearest competitor. Michael King finished 2nd in the Mitsubishi Evo 8 and Trevan Spiteri 3rd in the Evo 6.

Lee Vella won the final race for Superkarts from the ageless John Pellicano, while Aaron Cooper rounded out the podium. The result was a shut out for the Avoig Elise chassis, which proved to be the chassis of choice. The lead pair produced best laps over 3 seconds faster than Cooper. Reliability proved to be an issue throughout the one day event, with a number of karts stranded around the circuit in each heat. Adam Stewart was 4th, from Mark Robin and former 80cc front runner Robbie Trimmer in 6th.