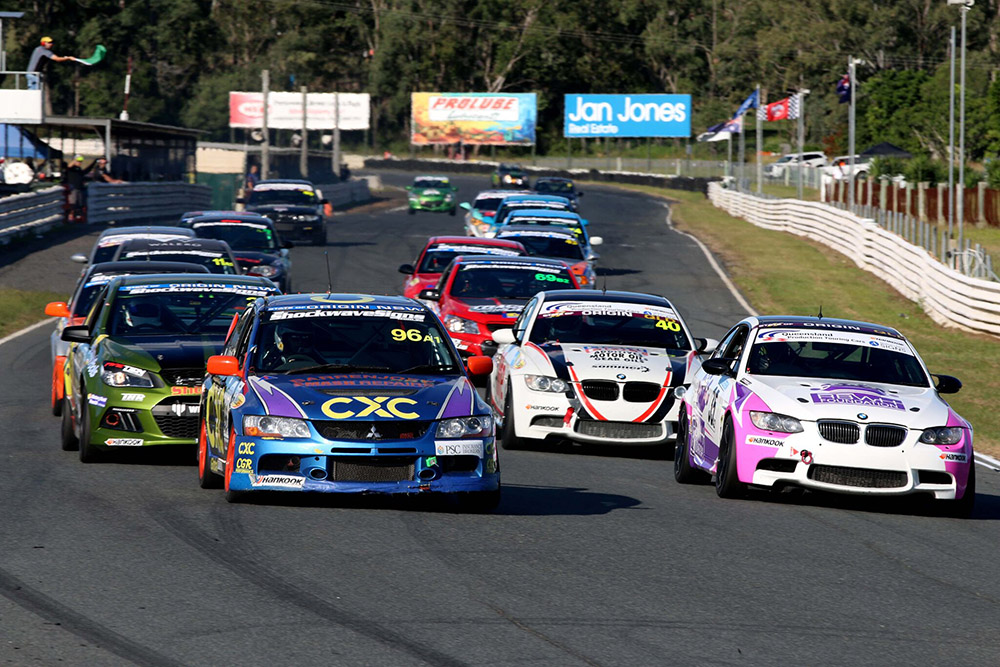 After a false start at Lakeside Park a month ago, the Queensland Production Car Championship will commence its 2018 season, second-time lucky, with two one-hour races, at Queensland Raceway this weekend – the same format used when the series made its first appearance at the Ipswich venue last October.

In good news for the series, the category has managed to reschedule its abandoned opening round, which will now be held as part of the QRDC 3 program, to be held at Lakeside Park, on the opening weekend of June.

As previously reported, MoComm Racing Communications – a long-time supporter of the NSW series – comes on board as the naming rights sponsor, for the championship, which expands to five events for 2018, with four of those counting toward the championship.

Those five events will feature some exciting new race formats, and a new venue as well, not to mention some new cars.

The series will make its maiden appearance at Morgan Park in September, with the Warwick Venue playing host to the penultimate round of the season. Sprint racing will feature in the championship for the first time, when the series returns to Lakeside Park for the second and final rounds of 2018 – each will feature four championship races.

The third event, at Queensland Raceway, will be held in-conjunction with the Australian Production Car Series round at the same venue. Organisers of both series’ have worked together to allow the Queensland series to contest the famed ‘Fight in the Night’ round.

It was previously thought that the Queensland series would play for championship points at that event, but the final calendar, released last month, confirms that it has been left as a non-championship affair.

The Queensland Saloon Car Championship will also join the grid for the July 27-29 event – that’ll be the second and last time they race with the QPC in 2018. The first time will be this weekend, when they venture to QR for the second round of their season.  Beggs leads the series after claiming honours in Round 1, at Morgan Park, last month.

In the QPC, Karl Begg enters the season as the defending champion, following a dominant display in the 2017 series, where he won five of the eight races held – only missing out in Round 2, at Lakeside, in the origin showdown, when New South Wales competitors stole the show.

Begg, and his co-driver Justin Anthony, come to Queensland Raceway fresh off their success in claiming Class A2 honours in the Hi-Tec Oils Bathurst 6 Hour.  The Mercedes C63 headlines an impressive multi-class field, which will also feature the Mitsubishi Evo of Wade Scott and Robert Gooley, who will be looking for better fortunes than they had at Bathurst, where they suffered major engine and mechanical dramas right across the weekend.

Greg Symes will also be on the grid. The Symes Transport Mitsubishi Evo is no stranger to this series – Symes and Aaron Seton won the State of Origin showdown at Lakeside Park last June, and the car will now make its maiden appearance at Queensland Raceway.

2017 regulars, Bruce Forsyth (BMW) and Michael James/Troy Rolley (Toyota) are ready to resume their duel in Class D. James returns to his usual drive after claiming Division 5 honours, with Forsyth, in the Willowbank 300 a fortnight ago.