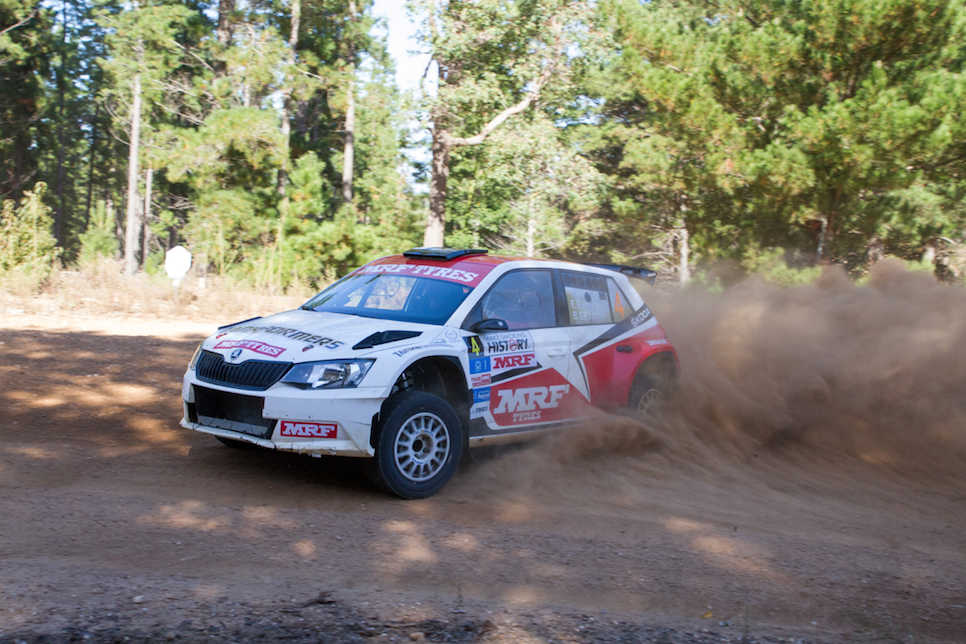 A dominant display by Eli Evans/Ben Searcy has seen the team take Heat One honours at the Make Smoking History Forest Rally in Nannup, Western Australia this afternoon.

Steering the Skoda Fabia R5 rally car for the first time in an Australian event Evans jumped out of the blocks this morning taking just under 40 seconds off his rivals in the opening two forest stages of the day.

“The roads here suit aggressive driving styles and I like to drive aggressively,” Evans said. “I’m more comfortable when I’m sideways than when I’m straight so it’s working for us now,” he continued.

With developments still to be found in Evans’ regular car, the Mini Cooper, the Tankformers team made a last minute decision to lease the Skoda off Race Torque Engineering, and the decision has paid dividends with his result today.

“It’s a nice car to drive, it feels like it makes rally driving easier because it’s so well set up, it’s just got no weaknesses,” Evans said. “I really enjoyed the day and it’s a great benchmark for the Mini Cooper moving forward,” he continued.

The Skoda Fabia R5 caught the eye of the other competitors, who, while possibly a little despondent about the times Evans was able to record over the morning stages were excited to see a R5 car out in the Australian forest.

“It’s exciting, I mean that’s where our sport is going and it’s great to see those cars filtering into the championship,” Brad Markovic said. “That’s really our next progression, the more we look forward our plan is working out what option we’ve got and going down a similar path because they are purpose built cars that are one level below the World Championship and they look like they are good fun to drive which is the best part,” Brad Markovic said.

Contesting the Forest Rally as a driver for the first time in a decade Steve Glenney and his co-driver Andy Sarandis finished Heat One in second.

“It’s even tougher than I remember out there, especially up the front,” Glenney said. “I think last time I was here I was 10th or 12th car on the road so it’s amazingly slippery, in some areas it’s almost like slow motion, and you just can’t push in the slippery areas you have to wait for the corner to come for you but we’re all in the same boat,” he continued.

“This result is so much better than we expected. The first time I drove the car was yesterday in the shakedown and the first time I’ve driven it on gravel was this morning so there was a fair bit of learning and the car’s probably not at the full spec but I was just having some fun out there and enjoying every minute,” Raymond said.

Joining the ARC competitors out in the forest were the crews contesting the second round CAMS Onslow Contracting WA Rally Championship with Brad Markovic – who also finished fifth in the ARC class – taking Heat One bragging rights.

Rounding out the top three in the WARC were Mike Young/Scott Beckwith and John O’Dowd/Tom Wilde.

“It’s always hard when you are competing in two different championships and therefore looking at two different results but to come fifth outright for ARC and be first in the WARC is a great result,” Markovic said.

More than 50 crews from across Western Australia and the nation are contesting the Make Smoking History Forest Rally. The event, which is held in Busselton and Nannup in the state’s South West, is the second round of both the CAMS Australian Rally Championship® and the CAMS Onslow Contracting WA Rally Championship.