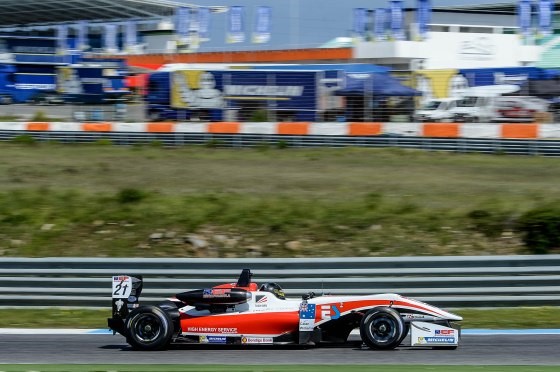 Today I had my first official Euroformula Open qualifying session and race at the Portuguese Circuito do Estoril.

Qualifying went really well where I set a time of 1:33.8 on my first set of tyres. We then came in mid session and fitted a second set of new tyres on which I improved by a full second to set a 1:32.8. This put me in P3 initially, however everyone was improving towards the end of the session and thus I was shuffled down to P10 in an incredibly close field, with drivers from P2-P10 separated by little more than half a second. I was really pleased with my lap, especially the last sector in which I actually posted the second quickest time of all of the field, and to qualify inside the top 10 in my first Championship event at this level was a good result.

In the first race I had a great start, and nearly gained a place off the line. I managed to hold 10th place for the first lap, however a small excursion off the track on the second lap meant I dropped a couple places and damaged the condition of the tyres. This meant I was now struggling for grip on an already slippery circuit and lost a couple more places. From there for the remaining 17 laps I managed to keep in touch with the pack in front of me and at times starting to get within striking range. However it was incredibly tough to completely close a gap due to the ‘aero wash’ you experience when behind another car (where the turbulent air they leave behind reduces the downforce generated on your front wing).

As a result, even though I raced solidly for 17 of the 19 laps, a couple early mistakes meant I could only manage to come home in P14. Looking for a better day tomorrow and will keep 100% focused until the weekend is completed.