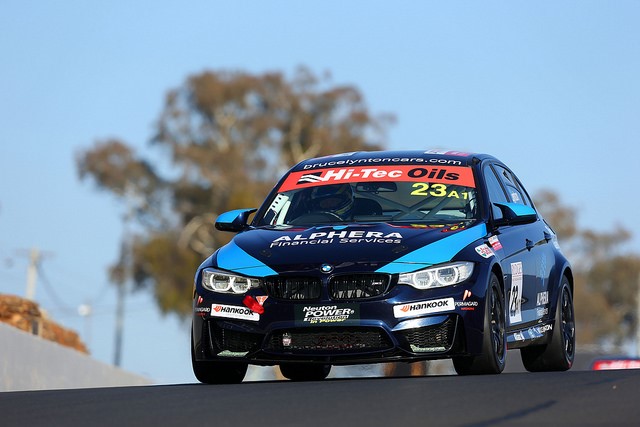 TIM LEAHEY has added his name to the list of drivers to have set new all-time Bathurst benchmark laps, thanks to a stunning lap in qualifying for the Hi-Tec Oils Bathurst 6 Hour.

The staggering time was a full 2.6 seconds quicker than the existing qualifying benchmark and secured BMW their third pole in three years at the Bathurst 6 Hour.

It was a one-off flyer that had all the hallmarks of a Greg Murphy or Scott McLaughlin once-of-a kind effort that significantly moves the Bathurst qualifying benchmark forward.

“The lap was really good,” Leahey, who hails from nearby Orange, said.

“I caught an Evo over the top but he was quick, as quick as me, so it wasn’t an issue. It was a clear lap, on the green tyre and I didn’t make a mistake so it was as good as it gets.

“We’ve got the car in the window with the handling. It’s got good power but it’s got good balance and it’s just an overall good package. Tomorrow is six hours, so it’ all new. We’ve got a few ‘one percenters’ we need to fix, so we’ll see how it goes.”

Grant and Iain Sherrin will start second in last year’s pole-sitting BMW M4, 1.9 seconds behind Leahey but comfortably ahead of their nearest rival.

The Sherrin Rentals BMW was the first to set a representative lap time in the session, however it took only one flying lap from Leahey to set the new Bathurst production car benchmark.

The team believes twelve months’ worth of development has made the Queensland-based M4 a much nicer proposition at Bathurst.

“We went through a lot last year to get it reliable. It’s a real nice car to punch out consistent laps and we know the car has that in it – it has nice quick consistent laps in it and we don’t have to push it that hard to get a good lap time out of it.

“That’s what we’ve been working on this weekend.”

Behind the two flying BMWs, attention turned to the fight for third.

That battle was intense and was ultimately secured in the dying moments of the session by Steven Johnson, a 2m26.254 edging out Jordan Cox’s Mitsubishi Lancer by 0.006 seconds for the prime spot on the second row of the grid.

0.031 seconds further back was Garth Walden’s AMG, he, Brad Shields and Craig Baird to line up alongside Chaz Mostert and Nathan Morcom on the second row of the grid.

Regularly the fastest car across the top of Mount Panorama, Mostert could do no better than sixth place in the DPO Ford Focus RS, just 0.3 seconds away from third place.

Jimmy Vernon continued to impress in the Fibre 15 Mitsubishi and placed their car seventh on the grid, ahead of the earlier-model Lancer driven by Steve Owen and Daniel Stuttered.

Karl Begg and Justin Anthony were ninth – and first in the normally aspirated Extreme Performance class – in the increasingly impressive Mercedes-Benz C63S, while Daniel Gaunt jumped into the Racing for a Cure Mitsubishi and instantly charged to 10th place.

The Turner / Rubis / Hazelwood BMW took pole for class B1, while the stunning Krinelos / Virag / Howard Holden Commodore SSV Redline was not only first in B2, but first non-class-A car and a stunning 14th overall.

Subaru banked the top-spot in Class C thanks to the Stoopman / Williams / Ross Impreza WRX (2m38.211), while the Honda Integra of Baker / Windsor and Callaghan topped Class D.

Nissan’s Pulsar was fastest in class E thanks to the Yucel / Salteri car that has topped every session in its class all weekend.

The Hi-Tec Oils Bathurst 6 Hour will commence at 11:30am local time tomorrow and will be broadcast live on FOX Sports 505 from 11:15am on Easter Sunday.