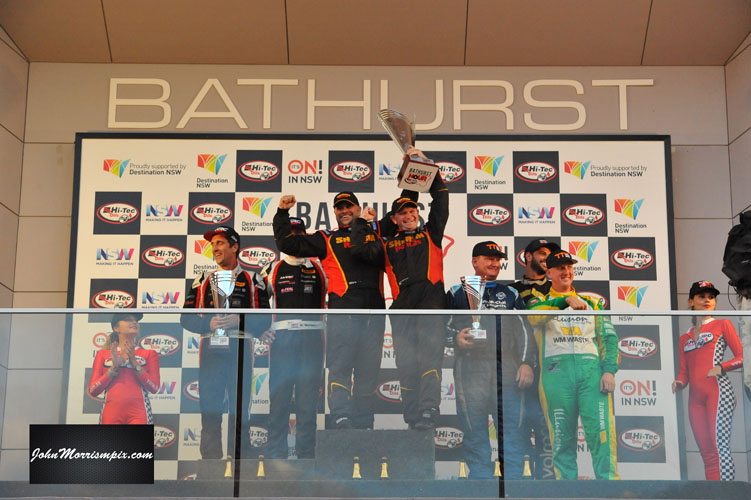 QUEENSLAND brothers Grant and Iain Sherrin rebounded from a late race drive-through penalty to sensationally charge from fourth to first in the final ten minutes of a dramatic Hi-Tec Oils Bathurst 6 Hour.

Sent to pit lane to serve a penalty for a breech on a previous restart, the car resumed the race in fifth place with 30 minutes to go – though more than 40-seconds behind the leader.

Fortunately for them, however, a final Safety car drew them back into contention for a thrilling 10-minute dash to the line.

Though they were no sure thing, Grant Sherrin restarted fourth however overhauled three cars fighting for the lead in front and edged away in the final two laps to win by just over three seconds.

There were four lead changes in the closing stages of a stunning race that saw the Sherrin’s BMW lead home American visitors Brett Strom and Darren Jorgenson in their BMW 1M.

The pair swapped the lead before both were passed by Sherrin in his final charge, only to continue their fight for second all the way to the final corner; Johnson losing second when pegged in behind a lapped car on the run to the cutting with two laps to go.

He then tried to attack again in Murray’s Corner however couldn’t work his way past the BMW in the end.
Out in front the Sherrin brothers celebrated a remarkable victory in another remarkable Bathurst enduro.

“I think I was going to break down and cry. It’s very emotional because we’ve been coming here for years,” Iain Sherrin said.

“We’ve just never cracked that outright victory we’ve been hunting for a while.”

“We’ve been focussed on standing on the top podium step. It’s been a long time coming and a lot of hard work between the 135 and now the M4.”

Added brothers Grant: “I wasn’t coming back in if we didn’t have that safety car – I didn’t want to face the pits after that penalty. We pulled a rabbit out of the hat there at the end.”

The RHC Strom / Lawrence with MARC Cars Australia team finished a fine second having flown under the radar for much of the race today.

Strong strategy and consistent pace from both drivers saw them emerge in contention, and then the lead when Beric Lynton’s BMW broke a wheel with half an hour remaining.

It put them in contention for the victory and ultimately the remarkable fight for second with the Johnson-driven Mercedes AMG.

“There were like eight corners when we were side by side,” Strom enthused post-race.

“I think he was quicker down the straight but was slower getting out of the corners, I think he had some sort of traction issue, I could hear the car cutting out as he was coming out of corners, so that was my advantage.

“I managed to stay alongside of him coming out of turn two and then I used that car as a pick.. I was thinking ‘you’re going to hit that car or hit me!’.”

Johnson said the thrilling battle with the BMW and ultimately a podium finish was just reward after battling a series of issues throughout the day.

The car started from pit lane after an electronic issue on the formation lap and then battled heat related computer issues all day.

“Rob (Woods) and Marcel (Zalloua) did a stunning job and set great lap times; they handled traffic and the faster cars well.

“During my second last stint, the car dropped into an ESC mode, so it wasn’t pulling out of corners. We were battling high temps at the end and that was causing it to go into the mode it was going in to at the end.

“I saw the BMW on my right and the slow car on my left and thought that I’d better lift or it’d end up like Murphy and Ambrose,” he said of the final battle.

“I decided to lift and give Rob a podium he deserved after missing out last year.”

Rod Salmon and Leigh Burges finished fourth outright in their Mercedes AMG A45 having been consistent performers throughout the day, while Jimmy Vernon, Paul Liaocono and Peter Lown finished a superb fifth – and first Mitsubishi home – after coming back from a lap down in the closing stages.

A giant-killing performance and a stunning 10th outright went the way of the B2 winners; Tony Virag, Joe Krinelos and Brett Howard powering to a giant-killing result.

In a dramatic finish, the Andrew McMaster, David Noble and David Worrell Mazda 3 won class E after Mark Griffith and Kyle Alford were cruelly robbed of victory when their car retired on the final lap.