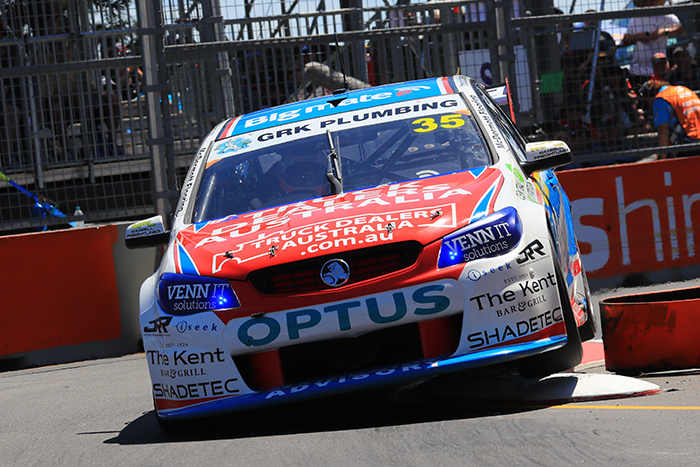 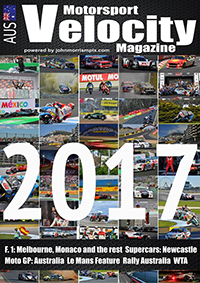 TODD HAZELWOOD finished the 2017 Dunlop Super 2 Championship in style. Two pole positions and two race wins, one in controversial circumstances was enough to overhaul Paul Dumbrell, who had a weekend to forget.

Hazelwood started the weekend with pole position for race 1, while Dumbrell found himself at the wrong end of the grid. He struggled for pace throughout the qualifying session and had just set the 11th fastest time when his Commodore found the wall at turn 1. The stoppage that followed relegated Dumbrell to last on the grid. Jack LeBrocq was 2nd from Garry Jacobson, Will Brown, Bryce Fullwood, Shae Davies, Richard Muscat, Anton De-Pasquale and Nathan Morcom, who rounded out the top 10.

Todd Hazelwood led the field away at the start of race 1. Jack LeBrocq was slower off the line and was forced off line at turn 1 by Garry Jacobson. LeBrocq’s exit speed was compromised and he lost places to  Will Brown and Bryce Fullwood. Further back, Jack Perkins was hit by Kurt Kostecki and hit the tyre wall at turn 1.

LeBrocq then had to contend with an oil overflow which sent smoke under the car and into the cabin for a short period of time. Will Brown looked to find a way past Jacobson as Macauley Jones also looked to pass Joshua Kean and tapped the back of the Wynns car. Kean spun into the tyre wall at turn 8, with extensive damage to the rear of the car. Jones stopped mid track and was then hit by teammate Jack Smith. Smith limped back to the pits and retired with significant front end damage.Jones then received a penalty for the initial contact.

Paul Dumbrell made steady progress towards a top 10 finish, aided by Adam Marjoram who ran into the tyres at turn 2 when he misjudged the entry. Le Brocq looked for a pass on Brown, though a brake lock up ended the move and allowed Davies to pass LeBrocq. Todd Hazelwood ran wide late in the race but maintained the lead to the end of the race from Jacobson and Davies. Nathan Morcom looked set for a career best finish, only to be turned around by Richard Muscat late race. Muscat received a time penalty for the contact and Morcom claimed 9th at the finish.

Todd Hazelwood continued his perfect record at Newcastle with pole position for the final race of the season. On the other hand, Paul Dumbrell was once again down the grid after a drive line failure had him 21st for the race.

Will Brown got the best of the start to race 2, as Hazelwood suffered from wheel spin off the line. He then dropped to 3rd when Shae Davies went around the outside at turn 1. Macauley Jones and Jack LeBrocq ran side-by-side up the hill. Todd Hazelwood soon dropped another place when LeBrocq made a dive past the Commodore.  Adam Marjoram became an early casualty after he glanced the exit wall at turn 8, though he did manage to crawl back to the pit lane.

Will Brown held a comfortable lead with just 5 laps to run, when the car stopped on track. Brown had reported a vibration that turned out to be a gearbox issue.  Teammates Shae Davies and Jack LeBrocq found themselves in a battle for the race win.  LeBrocq made a move around the outside of turn 2, the pair hit twice, with Le Brocq pitched into the tyre at turn 2 and the concrete wall at Castrol Curve, the car suffered heavy damage to the front and rear. Shae Davies took the chequered flag, but lost the win after a 25 second time penalty was applied for his part in the incident.

“I can’t believe it. That’s the hardest race I’ve done in my career,” said Hazelwood. “I’ve never had cramps like that in my guts for a long time. I don’t know where that came from.”