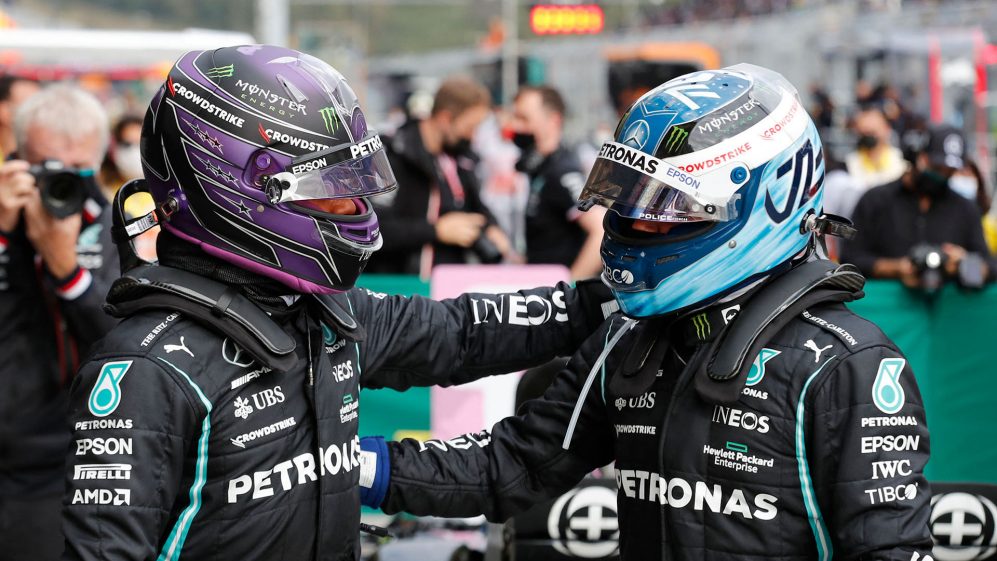 Lewis Hamilton claimed pole position for the 2021 Turkish Grand Prix, which means that he will start from P11 for the race as he serves a ten place grid penalty for a new internal combustion engine. Valtteri Bottas inherits the pole position from Max Verstappen in what proved to be an eventful and unpredictable qualifying session for all drivers.

Mercedes-AMG Petronas F1 held sway on the opening day of practice for the Turkish Grand Prix as Red Bull struggled for front end grip on the recently water blasted track surface. Water then played a major role in the results for FP3 as Red Bull returned to the top of the timesheets while Hamilton, Bottas and the McLaren duo finished uncharacteristically down the order. That session had been punctuated by spins for a number of drivers and was briefly red-flagged after George Russell spun his Williams into the gravel.

Qualifying was set to commence on a relatively dry surface, though a 100% possibility of rain during the session meant that drivers would be prudent to complete at least one flying lap early in the session or risk elimination in the event of the expected precipitation.

Two things were already certain; having taken new power unit components, Carlos Sainz would start the race from last on the grid, while Lewis Hamilton would start from no higher than 11th (unless those ahead on the grid also elected to make a change).

The fear of rain within 3 minutes brought drivers out into the pitlane well before the first stage of qualifying began as teams sacrificed temperatures in their new soft compound tyres for track position. Max Verstappen and Lance Stroll was amongst the minority to remain in the relative comfort of their garages with his tyres still snug and warm in their blankets.

That early push for speed rather ironically led to a queue of slow moving cars trying to create a gap as the finish line approached Lewis Hamilton exceed track limits in sector 1, while Carlos Sainz had barely begun his flying lap when he slid off the track. Max Verstappen was another to spin after finding himself stuck behind Stroll on his out lap.

“I tried to take it careful, but still no grip,” Verstappen told the Red Bull Honda Team.

Norris went to the top of the order as teams reported the first spots of rain, which spelt danger for the likes of Hamilton, Raikkonen and Giovinazzi, who had their first laps deleted for track limit violations. The colder track conditions was kind to the soft rubber which, combined with the ever increasing threat of heavier rain, kept drivers on track rather for multiple laps as opposed to the normal three lap stints most are accustomed to.

Grip levels somewhat strangely improved as the forces of 20 angry Formula One cars proved greater than the light drops of rain that were attempting to disrupt proceedings. Norris fell to 10th as Verstappen, Hamilton, Bottas, Stroll, Tsunoda, Ocon, Russell and Leclerc posted faster times. Mazepin, Gasly, Alonso, Sainz and Raikkonen sat at the other end of the order in the eliminations zone. Tsunoda narrowly avoided the wall at Turn 1 after another off-track excursion at  and a red flag, which would have been the 5th such time for the Japanese driver in 2021.

Hamilton went into P1 with a 1:25.050 despite a moment at Turn 1, which continued to cause concern for drivers. The continual lowering of the fastest times meant the passage to Q2 remained an uncertainty, especially for Vettel, Perez, Schumacher, Sainz, Latifi, Ricciardo and Russell, who all sat within the sight of the crevice.

That proved to be the case as improvements for Perez, Vettel, Schuchmacher, Sainz and Russell saw Daniel Ricciardo and Nicholas Latifi eliminated from Q2 where they joined Giovinazzi, Raikkonen and Mazepin.

“Obviously not where we want to be,” Daniel Ricciardo told McLaren Media. “The track was steadily drying and everyone just kept improving a chunk on that last lap. We didn’t make as big a step on that second set of Softs, and we’ve found it tricky with the Soft most of the weekend so it’s just unfortunate to be so far down the grid. We’ll find a way to come back tomorrow and try to understand the Soft tyre a bit better. It was probably also a bit of timing, we got quite a few yellow flags in Turn One which put us out of sync early. But I’ve already moved on from it, so now we’ll put our head down for the race tomorrow.”

Track conditions continued to improve under a menacing sky as the field filed out for Q2. Yuki Tsunoda was the only driver to venture out on the soft tyre, with 13 having chosen to run the medium compound. Carlos Sainz remained in the garage and seemed unlikely to participate given his penalty and rear of grid start for the Grand Prix.

Bottas immediately set a new fastest time for the day as he dipped into the 1:24 bracket, some 6/10ths faster that Gasly. Hamilton then posted a 1:23.082 to finish Q2 a half second faster than his second placed teammate. Drivers continued to struggle for traction at the first and final corners of the circuit, with George Russell and Sebastian Vettel amongst those to miss out on a place in Q3 after snap oversteer moments destroyed what had been their fastest laps. Vettel, Ocon, Russell, Schumacher and Sainz missed out on a place in Q3.

The Merecedes-AMG Petronas cars held sway during the opening runs in Q3 with Bottas ahead of Hamilton. Max Verstappen sat 3rd, 2/10ths from the leader, with Leclerc, Tsunoda and Stroll over a second off the pace.

The status quo remained throughout the closing minuted of the session, with Hamilton the only driver into the 1:22’s. Bottas claimed second and the effective pole position for the race, with Verstappen 3rd. Leclerc, Gasly, Alonso, Perez, Norris, Stroll and Tsunoda completed the 10.

“It’s so good to be back in Turkey because last year was unbelievable,” Hamilton said to Sky Sports. “The track is completely different as is absolutely awesome with the grip level it is giving us now. The session was particularly difficult because there were some damp patches and getting the temperatures into the tyres for the first lap wasn’t easy. I was really happy with the performance of the team in terms of getting us out at the right time.

Tomorrow is going to be difficult, but I will give it everything. It is not the easiest overtaking at the moment and we are on the same tyres and I imagine that tomorrow will be difficult to move up. We’ve got the long straight down the back so we’ll see what we can do.”

HAMILTON MAKES IT 100 WINS AT SOCHI

The Russian Grand Prix was one of contrasts; Lewis Hamilton striving to claim his 100th…