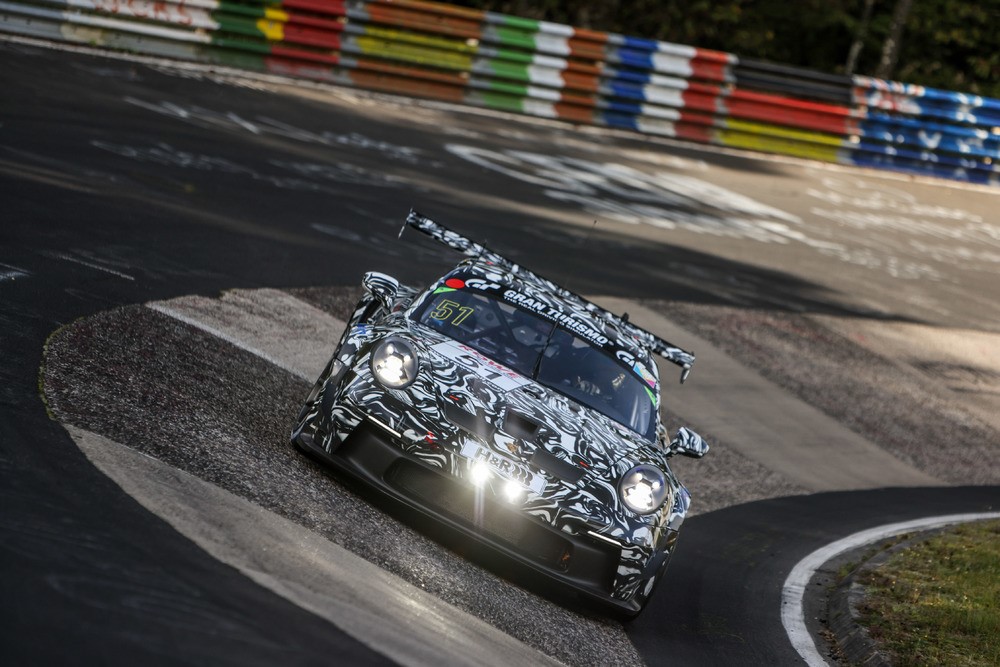 The latest Porsche 911 GT3 Cup has successfully demonstrated its potential for endurance races in a test outing under real race conditions. The ca. 375 kW (510 PS) Cup car based on the 911-generation 992 contested the penultimate round of this season’s Nürburgring Endurance Series (NLS). Marco Holzer and Uwe Alzen (both Germany) concluded the four-hour race on the 24.458-kilometre combination of the Nordschleife and the short Grand Prix circuit loop in 18th overall. 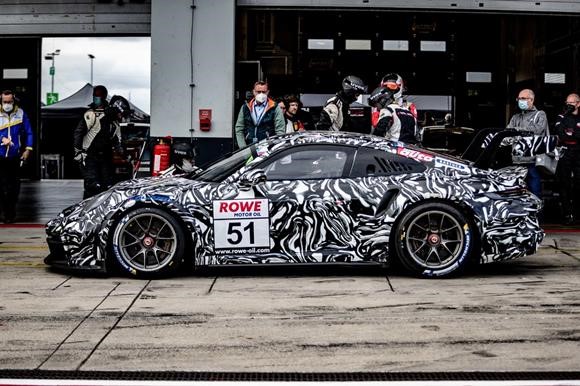 From the start of this season, the 911 GT3 Cup has served as the new one-make cup vehicle in the Porsche Mobil 1 Supercup as well as the national Porsche Carrera Cups in Germany, France, the Benelux countries, North America and Asia. Over thirty Type 992 Porsche’s will also make their debut in Porsche Paynter Dixon Carrera Cup Australia next year. From 2022, the latest edition of the world’s best-selling racer will also be campaigned in the NLS as well as in other endurance series and 24-hour races.

“As expected, the 911 GT3 Cup performed exceptionally well at its race debut on the particularly demanding Nürburgring-Nordschleife,” concluded Project Manager Jan Feldmann. “During its development, we made sure right from the start that it could also be fielded in endurance competitions as well as the one-make cup sprint races. Today’s test run in the NLS underlined that our team has done a great job.”

The spectacularly styled 911 GT3 Cup is the first one-make car from Porsche to feature a wide turbo-spec body. Producing around 375 kW (510 PS), it exceeds the output of its immediate predecessor by 25 horsepower and can also run on synthetic fuels, which significantly lowers CO2 emissions under racing conditions. Like its predecessor, the 911 GT3 Cup rolls off the production line in Stuttgart-Zuffenhausen alongside the 911 production models. After 160 units were produced for 2021, a second production run is currently underway, which involves more than 300 more racing vehicles to meet the high demand.

Compared to the previous model, the focus was on improved performance and a more aggressive design, easier handling and greater durability as well as making it more cost-effective to run and maintain. The result is reflected in numerous features of the new racing vehicle, which also have a positive effect on its suitability for long-distance racing and 24-hour events. For instance, additional flared fenders make a harmonious wheel-tyre combination possible with 12-inch wide rims on the front and 13-inch wide wheels at the rear axle.

This is typical for GT racing and has a positive effect on the handling and driveability of the racing car. While the rear axle essentially remains unchanged compared to the 911 GT3 Cup (Generation 991), the front wheels are now controlled by double wishbones and Uniball bearings – like in the 911 RSR, Porsche’s current top racing model. 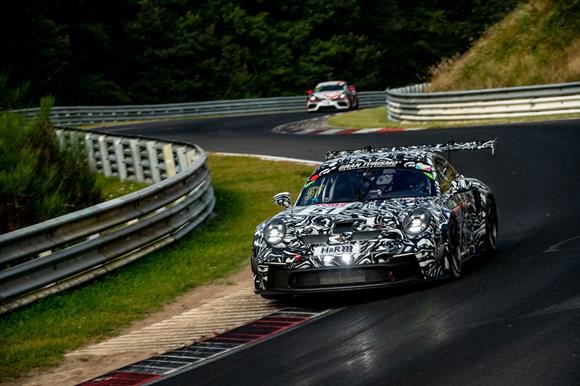 The modifications for racing in the “Green Hell” are surprisingly minor. “We’re primarily talking about an exhaust system that meets stricter noise requirements, and a modified tank filling system as well as softer sprint rates that harmonise very well with the damper system,” explains Feldmann. “Plus, the front has additional small flares, which provide a little more downforce at the front axle and make it easier for us to find a suitable setup for the demands of the Nordschleife.”

Unlike in the Porsche Mobil 1 Supercup and the Carrera Cup Deutschland, for example, the 911 GT3 Cup tackles the endurance races with traction control (TC) and an anti-lock braking system (ABS). The ABS can be ordered or retrofitted directly from the factory; the TC, which is also optional, can be activated electronically. Thus, nothing stands in the way of adjusting the vehicle for sprint and endurance competitions.

Jan Feldmann regards the outing in the Nürburgring Endurance Series as purely a test run, which serves to fine-tune the setup. In addition to its overall performance, the focus is on determining fuel consumption, for example, in order to achieve the target window of eight laps for one stint. Moreover, the racing car has been fitted with additional prototype headlights that should turn night into day at the 24-hour races. The Manthey team is also developing an extra hydration system.

This complements the exceptional ergonomics of the cockpit, which also includes a motorsport multifunction steering wheel made of carbon fibre. This makes it easier during a driver change to adjust to the different body sizes and statures.

The vehicle also features a centrally-positioned, 10.3-inch colour monitor as well as a so-called Rubber Switch Panel (RSP) to the right of the steering yolk. Reminiscent of a control element in the Porsche 919 Hybrid, these ten large buttons are given central functions such as lighting and ventilation or to change tyre settings from dry to wet tyres. The aim is to provide drivers with optimal working conditions for long stints at the wheel.

“It’s great fun driving the 911 GT3 Cup on the Nordschleife,” says Marco Holzer, who was involved early on in the development of the one-make cup racer. “It’s really fast, very pleasant to drive and it does exactly what you want without any unexpected surprises. It’s much more of a racing car now and, in my opinion, looks fantastic with its large wing and wider body!”

“I know all of Porsche’s cup cars, but the new 911 GT3 Cup feels even more like a racing car than ever – with its huge roll stiffness it reminds me very much of the 911 GT3 R,” underlines racing veteran Uwe Alzen. “The positive first impression was confirmed in the race – although the Nordschleife is usually a real brain-teaser and follows its own rules. We tried out a couple of things with the suspension setup. The car handles well and has a lot of potential. It’s truly great to drive and I was immediately taken with the ergonomics and craftsmanship. I’m already considering buying one myself and racing it on the Nürburgring!”