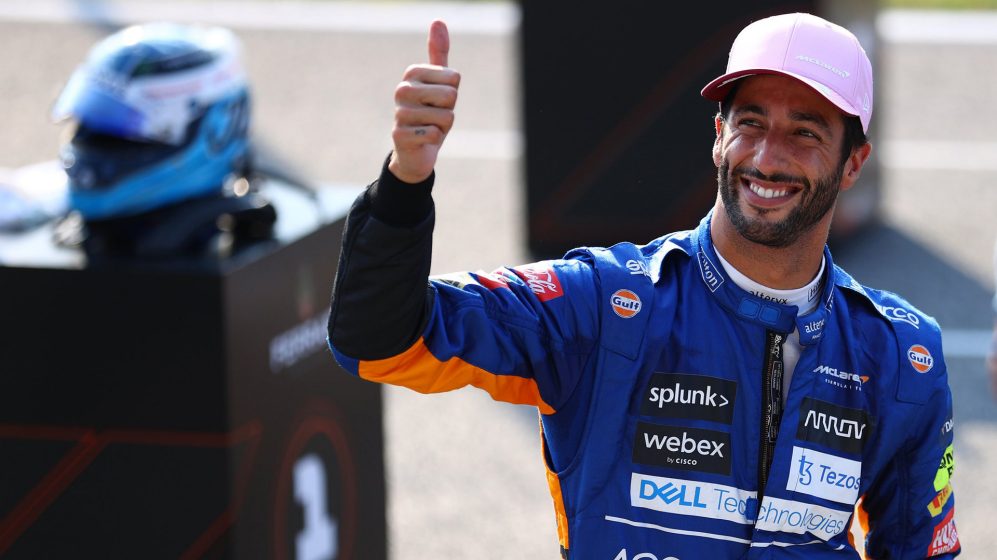 Valtteri Bottas came first in the F1 Sprint at the Italian Grand Prix but it was Daniel Ricciardo who stole the limelight with a 3rd place finish, his best result with McLaren. That became second and a front row start behind Max Verstappen after the power unit penalty saw Bottas drop to last place for the Grand Prix. 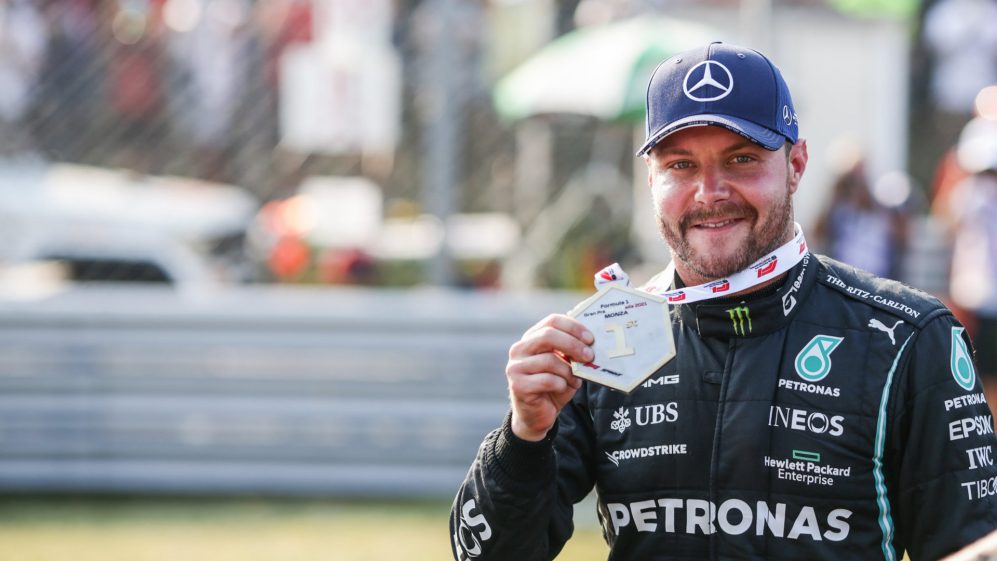 Tyres were the X-factor for the Italian Grand Prix Sprint Race. Performance models suggested the soft red wall tyres were the best choice from the start, but would not last the 18 lap distance. The hard tyres were expected to be the fastest tyre by the end of the race, while the medium were somewhat of a compromise. Bottas, Hamilton and Verstappen elected to run the medium tyres, while the McLaren pair of Norris and Ricciardo gambled on the softer option.

Carlos Sainz gave his Ferrari mechanics another frantic repair for the second time in two weeks after a crash in the morning practice session. while Charles Leclerc was not feeling 100 percent.

Valtteri Bottas knew that this race was his best chance for a win over the weekend after a power unit change consigned him to the rear of the grid for Sunday’s Grand Prix.

As the lights went out it was Bottas who led away from Verstappen. Norris grabbed the attention of Hamilton with a fast start and a move towards the pit lane exit. Hamilton moved across to cover the attempt, which left the outside line clear for Verstappen and Ricciardo to move ahead.

At the exit of the Variante del Rettifilo it was Bottas from Verstappen, Ricciardo, Norris, Hamilton and Gasly. The Alpha Tauri had suffered front wing damage after touching Ricciardo’s rear wheel in those opening corner. Sparks then flew as the wing dragged along the ground then broke away and under the car. Gasly went off through the gravel and hit the wall at the Curva Grande.

The incident brought out the Safety Car, which played out in favour of those on the softer tyre, with the subsequent slow laps reducing the wear on the more sensitive rubber.  In the ensuing melee, Yuki Tsunoda also damage the front wing on the second Alpha Tauri after contact with the Alfa Romeo of Robert Kubica. Tsunoda pitted at the end of the lap for a new nose and fresh rubber.

Racing resumed on lap 3 with Bottas quick to leap away from Verstappen, Ricciardo, Norris, Hamilton, Leclerc, Sainz, Giovinazzi, Stroll and Perez. The top 10 remained largely unchanged throughout the opening 10 laps of the race, though Perez did momentarily pass Stroll for 9th at the Variante del Rettifilo. The Red Bull Honda driver had gone across the chicane in doing so and was forced to cede the position to Stroll later in the lap. Perez eventually made a more successful pass to regain 9th the position.

Bottas led Verstappen by 2.14 seconds at the chequered flag with Ricciardo a further 9 seconds in arrears, but 4.06 seconds clear of Norris, while Hamilton found it impossible to pass the McLaren and took 5th. Leclerc, Sainz, Giovinazzi, Perez and Stroll completed the top 10.

Third place for Ricciardo becomes a front row start from 2nd for the McLaren driver, their best grid position since Mexico in 2018.

“That’s P3 baby,” Ricciardo’s engineer called out to his driver.

“That’s a nice one guys, front row tomorrow” He replied.

“Grazia Davi, Grazia,” Ricciardo said to the cheering crowd and Sky Sport. “It’s been a long time to be in this position, so it’s good. It’s good to be back, but tomorrow is the important one and we gain a position from Valtteri’s problem, so we’re on the front row and that’s been a long time, so very happy for that! 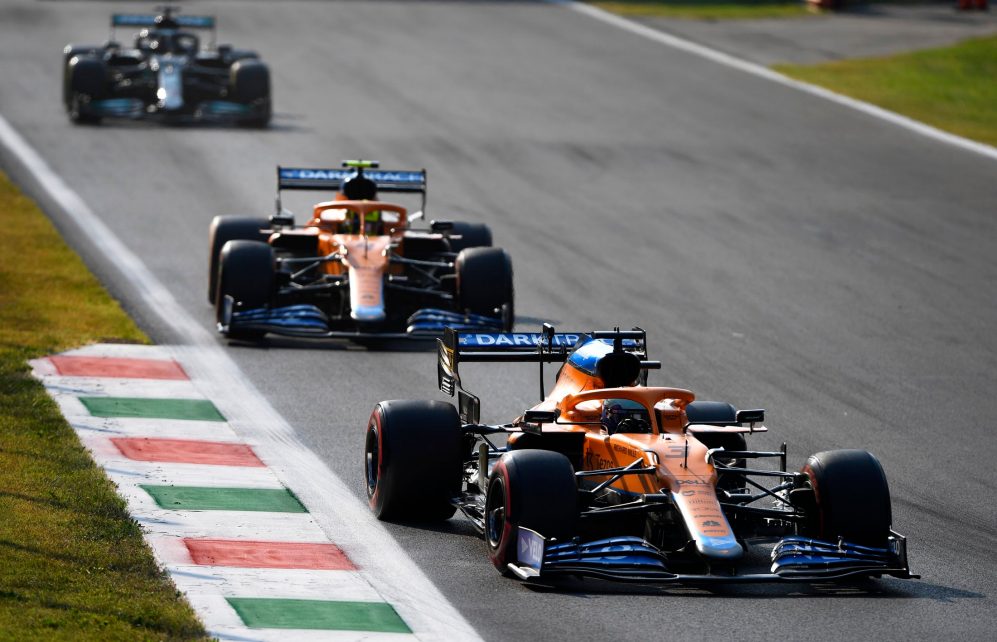 “Full attack tomorrow and today gave me that chance. I thought I might have Max at the first chicane but he had the inside. I look forward to tomorrow.”

It’s my first medal in my life,” Max Verstappen announced as the 2nd place medal was hung around his neck and he moved towards the Sky Sport interview position. “The race went a little bit better than expected. We got a good start and got up to second. We scored some nice little points and are starting on pole for tomorrow. Nevertheless Mercedes seems to be very quick and I was doing everything to try and stay close. It’s going to be an interesting battle tomorrow. 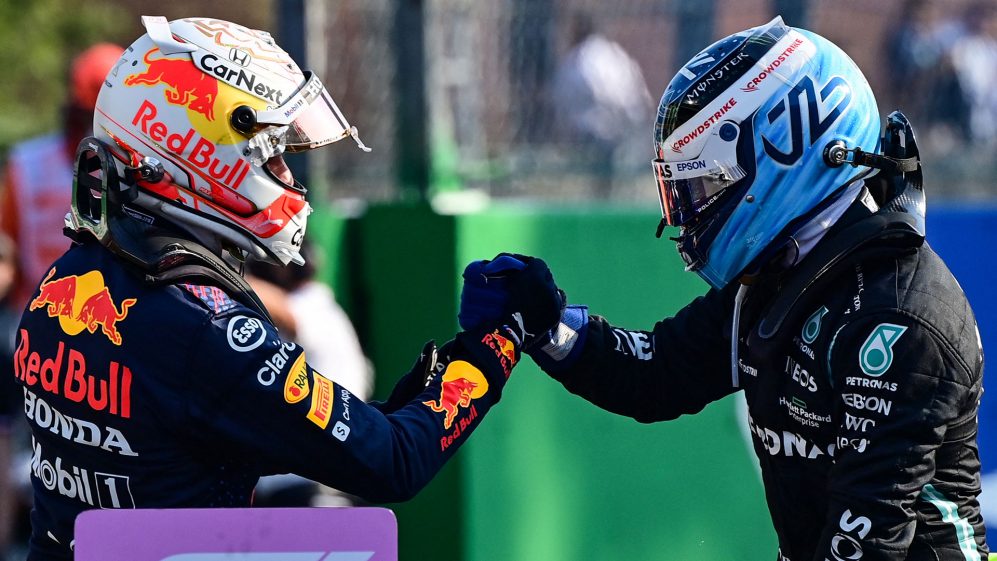 For Valtteri Bottas there must have been mixed emotions in the week his departure from Mercedes-AMG Petronas F1 was announced and the power unit change that will see him at the rear of the grid for the Grand Prix.

“Thank you, It feels good,” Valtteri Bottas replied when told by Sky Sport that he deserved the 1st place medal. “It feels like it has been a while since I finished 1st in a race and unfortunately I’m starting from the back tomorrow, but the speed is there, so I’ll be fighting. Today I enjoy. It was a very clean race and we had good pace.

Tomorrow’s not going to be easy when there is a train of cars with DRS. Strategy-wise we have a free choice of tyres at the start, so let’s see if we can do something. I’ll give all I have, I promise that.”