Carlin’s Jehan Daruvala put on a controlled performance in the second Sprint Race at Monza to claim his first victory of the season, ahead of Trident rookie Bent Viscaal and PREMA Racing’s Robert Shwartzman, who took his fourth podium of the year.

Given the chaos of the opener, the second Sprint Race was surprisingly peaceful, with Daruvala crossing the line 6.1s in front of Viscaal, who scored a maiden Formula 2 podium.

Shwartzman was a late entrant into the top three after reverse polesitter David Beckmann locked up late in the race and fell from second to fifth, behind Liam Lawson.

Championship rivals Oscar Piastri and Guanyu Zhou finished one behind the other in seventh and eighth, while Hitech Grand Prix’s Jüri Vips was ahead of them in sixth.

Lining up from pole for the second race in succession, Beckmann endured an almost identical start, but this time it was the Carlin of Daruvala who got the jump on him, launching off the line and down the inside into Turn 1 to take first.

After a great getaway, Viscaal was up one place to third, ahead of Vips, but Sprint Race 1 hero Christian Lundgaard had been spun around and dumped at the back of the field.

There was a sense of déjà vu in the battle for seventh, as 2020 Formula 3 title rivals Théo Pourchaire and Piastri started to tussle. The Frenchman had already passed Zhou and was trying to muscle his way ahead of Piastri too, eventually making the move stick after several corners of toing and froing.

A Virtual Safety Car meant that Piastri was unable to reply, as HWA RACELAB teammates Jake Hughes and Alessio Deledda collided, leaving the Briton’s car stuck in the wall. Guilherme Samaia had also pulled his Charouz Racing System to a stop at the pit entrance.

After momentarily losing fifth to Lawson, Shwartzman recovered to not only reclaim P5 but to snatch fourth from Vips as well, who then fell a place further behind his Hitech teammate.

Piastri set the fastest lap on his way to regaining seventh from Pourchaire, with the ART wobbling ever-so-slightly wide and plunging into the clutches of Zhou, but the Virtuosi racer opted against an initial move and decided to remain patient.

Piastri was allowed to scamper off up the road as Pourchaire switched his attention to defending P8, but the Sprint Race 1 winner missed the chicane and had to go through the escape road, returning in ninth, out of the points.

Daruvala was looking untroubled out in front, but Beckmann and Viscaal were still battling for P2, six seconds further back. The Campos locked up at Turn 1 and had to take the escape road. Returning in third, he attempted to retake second but appeared to have re-joined the track unsafely, which the Stewards duly noted.

Viscaal brushed off the challenge and darted off into the distance, as first Shwartzman, and then Lawson, both jumped Beckmann and dropped him to fifth ahead of the chequered flag. Vips held onto sixth in front of Piastri and Zhou.

“I think that a win was long overdue this season, so I am very happy. This weekend has been good so far, I’ve been consistently quick. I think we deserved the win, hopefully, I can repeat it tomorrow.”

Piastri leads the Drivers’ title fight on 124 points, ahead of Zhou on 116 and Shwartzman on 105. Vips is fourth with 90 and Dan TIcktum is fifth with 89.

After securing a second successive pole on Friday afternoon, Piastri will look to extend his Championship lead in the Feature Race. The PREMA will line up ahead of Daruvala and Zhou when the action begins on Sunday at 10.25am (local time).

Pourchaire wins for the second time in action-packed Monza opener 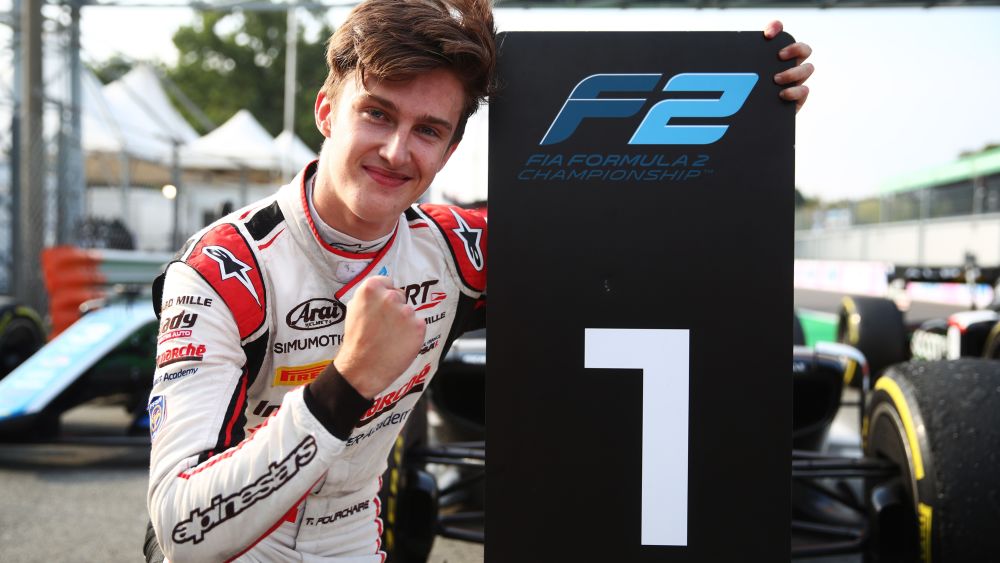 Théo Pourchaire kept his cool in a chaotic Sprint Race 1 at Monza to take his second win of the season from fourth, with title challenger Guanyu Zhou making up six places from to second, and Christian Lundgaard completing an incredible recovery drive from 19th to take the final podium spot.

Jüri Vips had stolen the lead from reverse polesitter David Beckmann when the lights went out, but both succumbed to heavy tyre degradation and finished the race in eighth and 10th, respectively.

Their struggles allowed Pourchaire to pounce and take the lead, with the ART Grand Prix driver brilliantly managing his rubber to cross the line with a 4.3s advantage. Zhou had too much ground to make up by the time he got past Vips but did close the gap to Championship leader Oscar Piastri, who finished in fourth, ahead of Liam Lawson.

There could be several nominations for driver of the day, but chief of those was Lundgaard, who suffered a torrid time of things in Qualifying, but found plenty of race pace to complete a double podium for ART.

Speaking ahead of the race, David Beckmann had been uncertain of retaining the lead, and this played out at the start as Jüri Vips made a great getaway from second and launched his Hitech in front of the reverse polesitter down the main straight.

The whole field made it through the opening lap unscathed, but this proved short-lived as Dan Ticktum locked up under pressure from Pourchaire and missed his braking point. The Briton tried to hook it back onto the track but was then tagged by Felipe Drugovich and spun around.

The Safety Car made a maiden appearance to clear up the Carlin as Drugovich dived into the pits for repairs to his front wing. Racing resumed and Zhou quickly found his stride, setting the fastest lap and moving into sixth ahead of Robert Shwartzman. There was heartbreak for his teammate, though, as Drugovich lost his Virtuosi at Ascari and went skidding into the gravel, bringing out a Virtual Safety Car.

Lawson ran into trouble as a move on Pourchaire for P3 failed to pay off and left him with a damaged front wing. He dived into the pits and returned in last place when racing resumed.

Back at the front, Pourchaire was hounding Beckmann for second and his persistence paid off as the Campos driver locked up at Turn 1 and had to take the escape road, which dropped him to fourth. Pourchaire was hoping to use the momentum to steal first from Vips as well, but a Safety Car brought a halt to his chase of the Hitech as Roy Nissany spun to a stop on track.

At the halfway point, the top 10 had been given an almighty shakeup, with Vips leading Pourchaire, Zhou and Beckmann. Shwartzman was in fifth but had a five-second time penalty hanging over his head for leaving the track and gaining an advantage. Lirim Zendeli was up to sixth from 11th, while Lundgaard had made it to P7, ahead of Piastri, despite starting 19th.

The craziness didn’t end there. Vips was struggling for grip and lost the lead to Pourchaire at the restart, with the Frenchman taking the inside line at Turn 1 and braving a late-braking move.

Beckmann’s tyres were shot, and he plummeted down the order at the restart. Vips was desperately trying to avoid the same fate, clinging onto second ahead of Zhou, but wobbling all over the road.

Pourchaire had set two successive fastest laps and built up a six-second advantage by the time Zhou grabbed second place, Vips succumbing to the pressure and going deep into Turn 1, which forced him down the escape road.

Zendeli’s race was run with three laps to go as he pulled his MP Motorsport to a stop at the side of the road and clambered out, which resulted in a yellow flag.

From here the chaos subsided as Pourchaire swept over the line for a second win of the season. Zhou had managed to cut the gap to just 4.3s at the flag but settled for P2 ahead of star performer Lundgaard. Despite spending the majority of the race towards the back of the top 10, Piastri was in fourth at the flag, doing his Championship hopes no harm.

Recovering splendidly from the front wing that dropped him to the back of the grid, Lawson finished fifth, with Shwartzman sixth after his penalty had been applied. Bent Viscaal claimed seventh, as Vips hung onto a points’ place, taking eighth.

“That was a crazy race, with a lot of good overtakes from P4 to the race win. There was a podium for my teammate as well from P19. The car was really good, and the team are really happy.

“I don’t know what to say, I just want to thank the team and thank Sauber Academy. I hope we can do the same in the second race.”