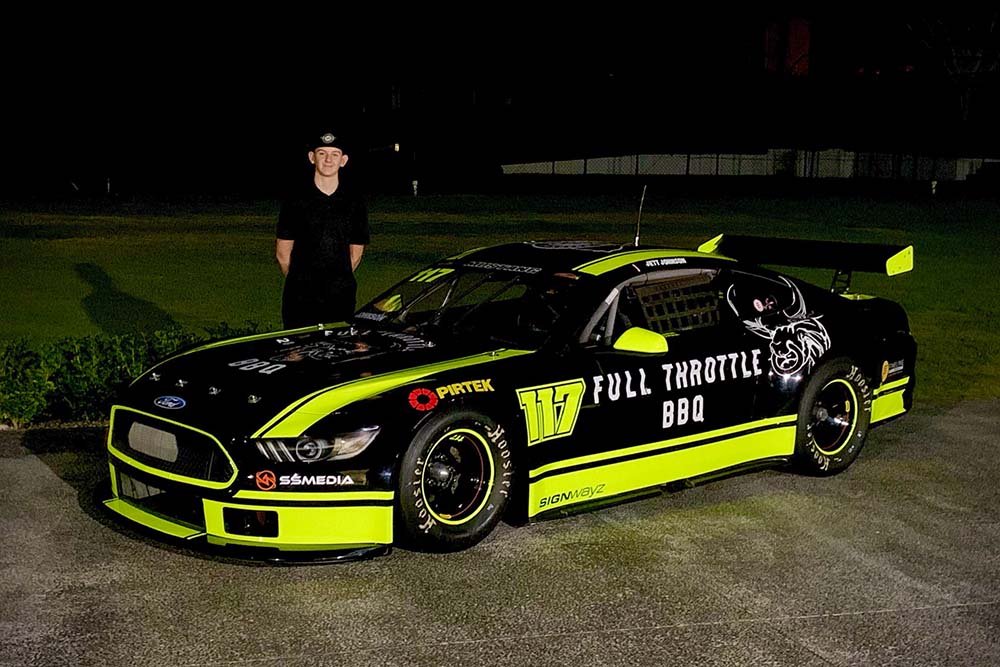 Jett Johnson has revealed the #117 Full Throttle BBQ Ford Mustang that he will make his PROMAXX Performance Exhausts TA2 Muscle Car Series debut in this weekend at the 2 Days of Thunder at Queensland Raceway.

After commencing his racing journey in go-karts, the third-generation racer has been racing in the Queensland Hyundai Excel State Championship for the last two years, but his step to the TA2 Muscle Cars will mark his first race in a V8-powered machine. 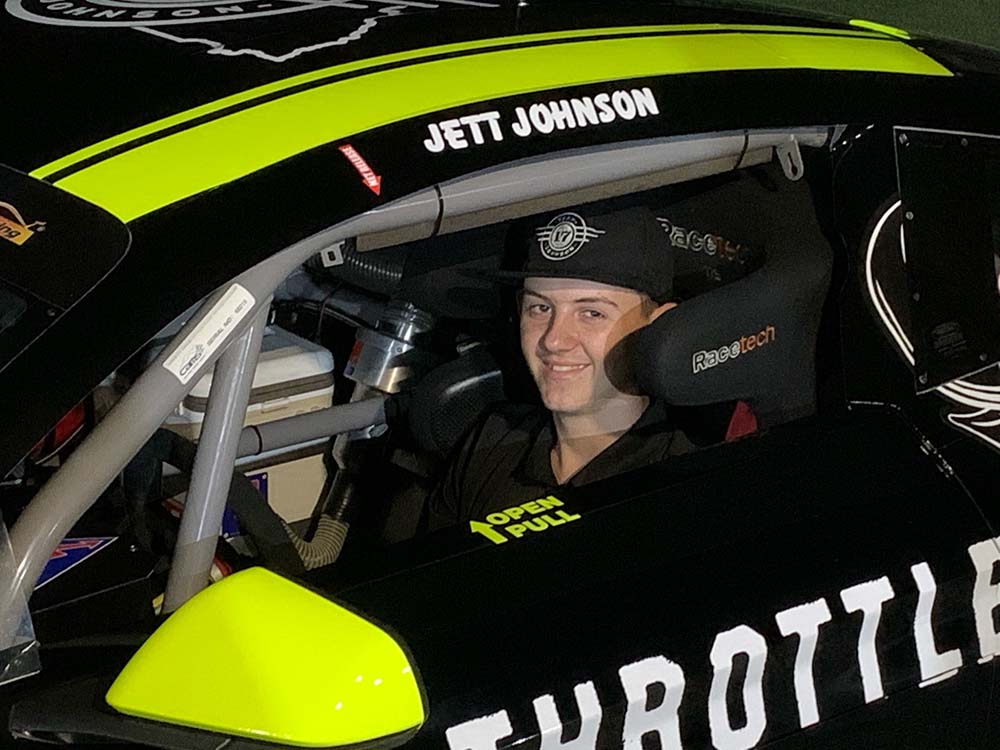 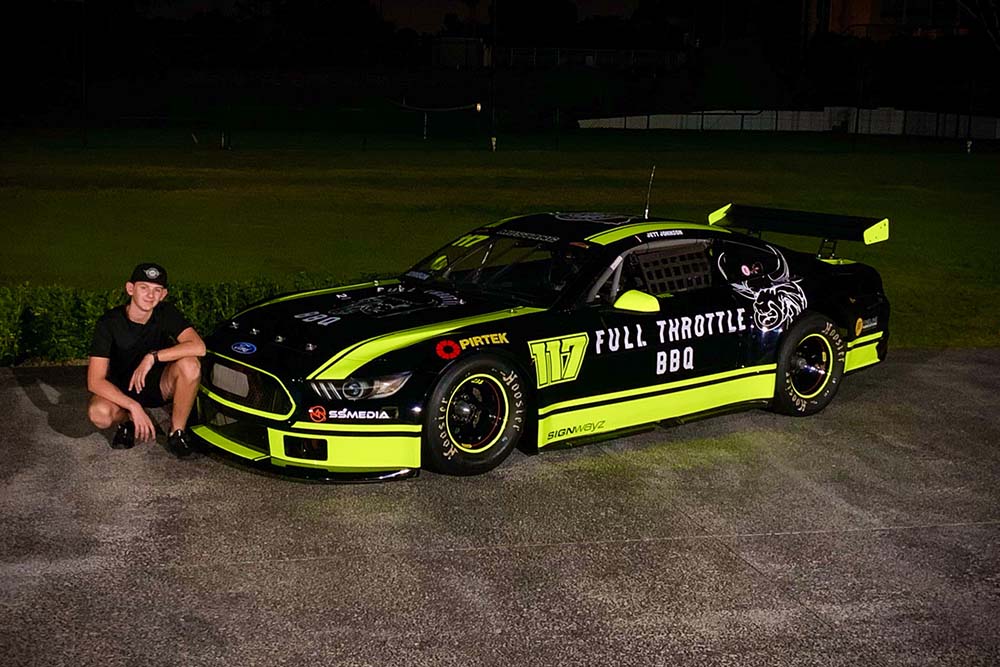 Jett, the grandson of five-time Australian Touring Car Champion and three-time Bathurst 1000 winner Dick Johnson, will have his multiple Supercars race-winning father Steve in his corner this weekend in a family run-effort, with car owner and TA2 regular Warren Wadley also joining him on the grid in a two-car team.

The Johnson/Wadley team will be bolstered with support from Supercars championship-winning engineer Paul Forgie to help out both drivers.

His step into TA2 racing also mirrors that of Steven’s racing journey, who raced in the New Zealand TraNZam category in the mid-1990s.

Johnson first tasted a TA2 car at Queensland Raceway last year at 15 years of age, and is using this weekend’s Northern Series event to continue his learning, with the aim to complete the remainder of this year’s TA2 Muscle Car Series season.

The 2 Days of Thunder will hold the first round of the Northern Series following the postponement of the AMRS round scheduled for Morgan Park in May, before the TA2 Muscle Car Series continues at Winton Motor Raceway on 16-18 July.

Johnson will get behind the wheel of the #117 Full Throttle BBQ Ford Mustang on Friday for general practice.

The event format will see a single 15-minute official practice session on Saturday morning, followed by a 15-minute Qualifying session and the first 12-lap sprint race in the afternoon. The final three 12-lap races will be held on Sunday. 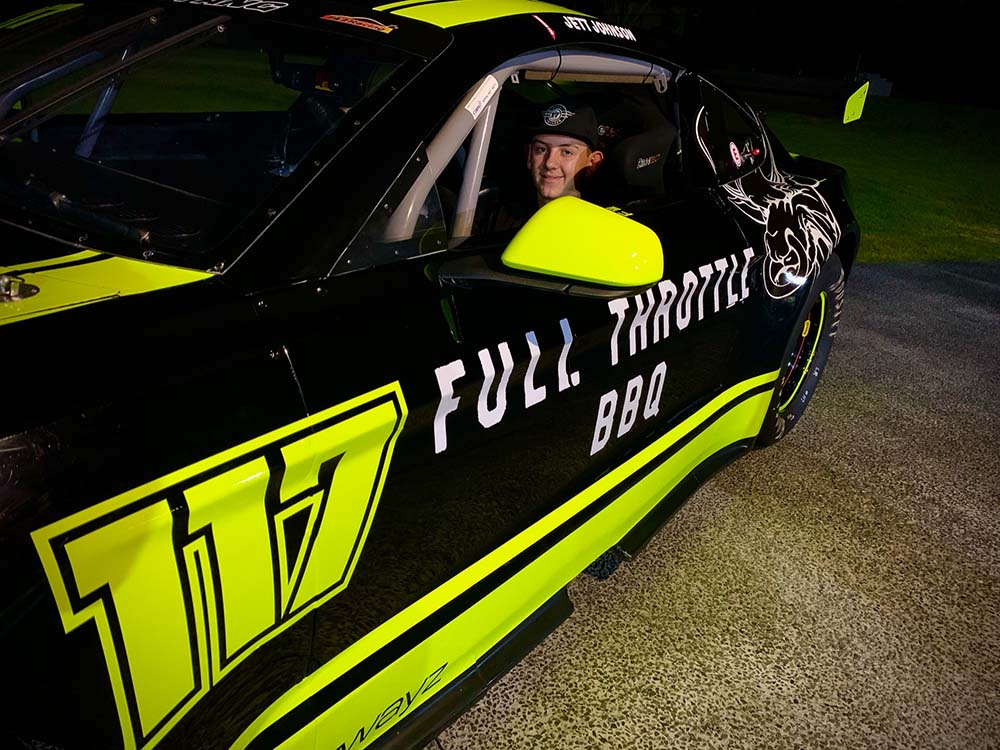 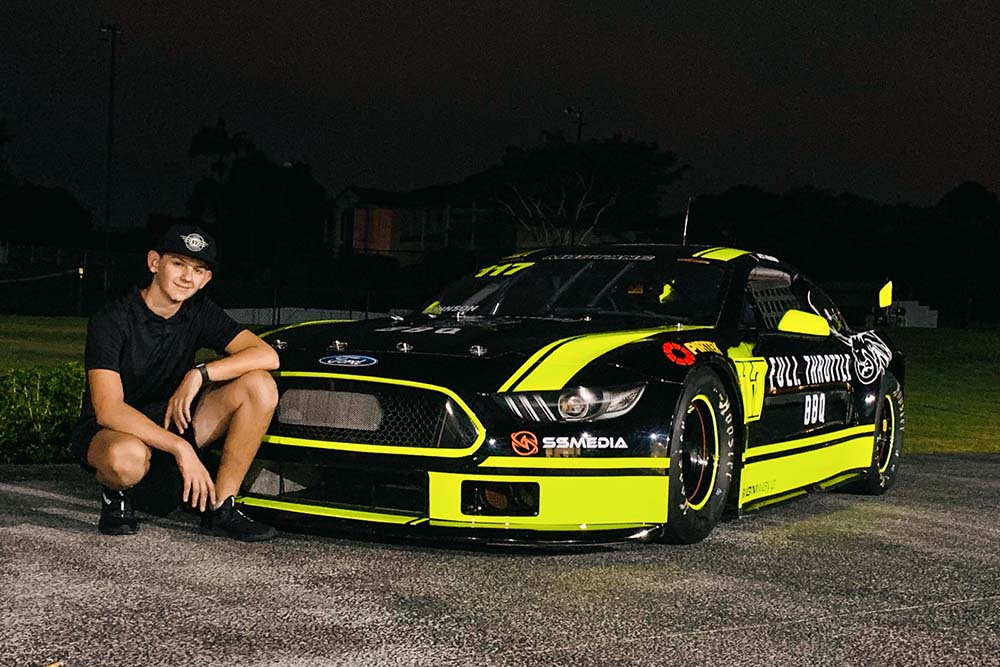 “I’m so excited to get behind the wheel of the Full Throttle BBQ Mustang this weekend for my first TA2 race,” said Jett Johnson.

“The TA2 Mustang looks unreal and I have loved driving it so far.”

“It is a lot more fun to drive than the Hyundai Excel, it takes a bit more discipline to drive on the edge and it’s easy to have the back-end hanging out at every corner.

“The main thing for me is to learn the discipline of driving and race craft, but also how to manage the tyres over a race weekend.

“Going into this weekend the aim is to just learn about the car, get used to it and have some fun out on track with a full grid of TA2 cars.”

“The Full Throttle BBQ Ford Mustang looks incredible, and we can’t wait to get it out on track this weekend for Jett’s first race in the TA2 Muscle Car Series,” said Steve Johnson.

“We’re lucky enough to have some great partners onboard including Full Throttle BBQ, which is an offshoot of Full Throttle Custom Garage that sponsor me in the XD Falcom [TCM car], and you won’t miss it out on track!

“We’ve put a lot of thought into what Jett was going to race next, and we really wanted a car and a category that gave him the opportunity to develop his driving skills more closely to Supercars.

“I didn’t want him to start to learn about racing by driving a car with aids like ABS. That’s why TA2 for us was one box ticked for us out of many we looked at.

“The cars themselves are not quite as much horsepower as a Supercar but a lot more than what he’s been used to, the different thing is their left-hand drive but that’s something you adapt to pretty quickly.

“We looked into this whole TA2 category in regards to how they’re cool cars and similar to what I used to race back in the day, and the cost containment that is going on with the rules that are highly scrutinised.

“For the cost of the cars and the maintenance, they’re an unbelievably good bang-for-buck car to go racing in a proper series in a proper high-horsepower real-wheel drive race car.

“We’ve got no real expectations this weekend, we just want to get out there, get some experience and get this new chapter of his career going with the TA2s.

“Our plan is to run the rest of the year in all the TA2 rounds and seeing how we go, head down to do the Challenge Bathurst and possibly the Bathurst International event if all goes well, but there’s a few events at QR, Morgan Park and Wakefield Park before then.”