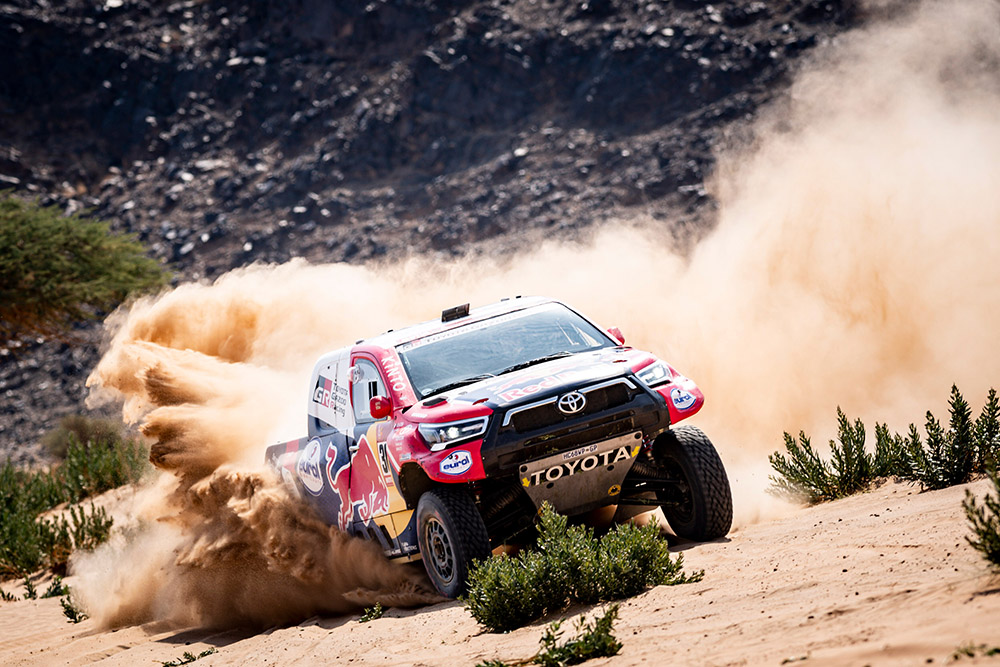 Two-time Dakar champion Nasser Al-Attiyah cut Stéphane Peterhansel’s lead to under five minutes as he sealed a third consectutive stage win. Meanwhile in the bike class, Sam Sunderland was the best placed of the Red Bull KTM Factory Racing riders and truck leader Dmitry Sotnikov ended the day with an advantage of more than 25 minutes.

– Al-Attiyah and Peterhansel were closely matched throughout stage four, the former taking the win by a mere 11 seconds at the finish. Afterwards, he said: “It’s been difficult in these early stages to make a big difference but I’m happy.”

– Peterhansel admitted he had felt on the edge before arriving in Riyadh as he bids for a 14th title in the event. “It felt risky to be so close to the maximum all day,” he admitted.

– His countryman Sébastien Loeb climbed up to fourth overall with another strong showing and credited his car with “having no problems” but Carlos Sainz remains in third spot and a place ahead in the standings.

– Elsewhere in the car standings, Cyril Despres, Giniel de Villiers and Kuba Przygoński all had consistent performances to keep them in the hunt in the overall standings.

– In the bike class, Sunderland finished 10 minutes behind stage winner Joan Barreda and said: “It looked like the stage times would all be quite close today so it didn’t really make sense to keep pushing.”

– Sunderland’s teammates Toby Price and Matthias Walkner were another five minutes back on the stage. It leaves Sunderland and Price seven minutes away from overall leader Xavier De Soultrait with still much to play for. It left Price to declare: “All in all, we’re here and in a good way.”

– Debutant Daniel Sanders, who said he was glued to the roadbook for much of the day, impressed in his first Dakar with second on stage four to put him in 14th.

– Mitch Guthrie Jr came within a whisker of a third stage win of his Dakar Rally career but the American continued to cut the deficit he had endured on a tough stage one in the lightweight vehicles. Looking ahead to stage five, he insisted: “Tomorrow we’ll really push.”

– Chaleco Lopez continues to lead that particular class with Seth Quintero, who closely followed Guthrie Jr from the 150-kilometre mark, Cristina Gutiérrez and Mattias Ekström all in the mix.

– Sotnikov may be dominating for Team Kamaz Masters – leading since the prologue – but he said: “The end of the stage was really difficult to navitate and I think our co-driver did a great job. We did well to get through without mistakes.”

– The rally resumes as the Dakar cavalcade departs from Riyadh for a 456km timed special stage.