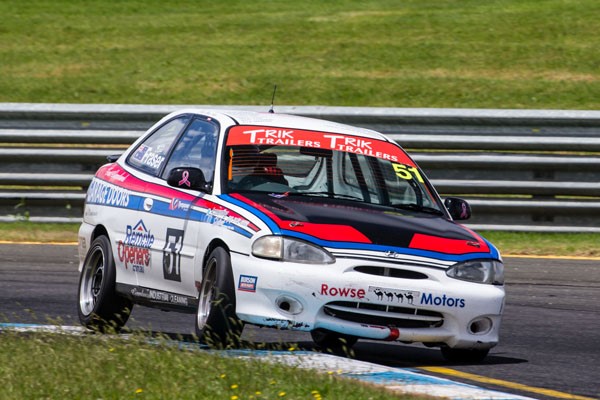 Marcus Fraser has capitalised on some penalties for his key rivals to snare a 24-second win in today’s Victorian Excel Racing Series one-hour enduro at the Sandown AMRS round.

In the early stages, Fraser was engaged in a battle for second position with Ben Grice, while yesterday’s double sprint race winner and fastest Top 10 Shootout qualifier Jay Hanson held the early lead.

However, Hanson and Grice both fell foul of officialdom, receiving drive-through penalties for overlapping during a Safety Car race restart; Fraser took full advantage and drove to a comprehensive victory, while Hanson and Grice recovered strongly to finish second and third respectively.

The PROMAXX Exhausts TA2 Muscle Car competitors encountered a wet track in this morning’s third race, yesterday’s Race 1 and 2 winner Graham Smith leading the early stages. A Safety Car was deployed when Jason Hassett spun his Camaro at the final corner and the race resumed for a single-lap dash to the line.

Smith struggled for traction while accelerating back up to speed on the main straight and Tim Shaw capitalised, pouncing into Turn 1 and taking the win.

Shaw also won Race 4 after again battling hard with Smith, but Smith’s results across the two days were enough for him to take the overall round honours.

“It’s been brilliant, even in the different conditions we faced today, it was just great to survive through those,” Smith said.

“I was really happy to keep up with Tim Shaw as he was putting down some strong laps in practice and won the pole award with a 1:14.7, so I was just glad to keep up with him in the races and win a couple along the way as well.”

“I could have tried a dive bomb or something in the last race but it wasn’t worth it, I knew if I finished second I’d get the round win so I just tried to keep my head up and come home with a clean car.”

In the Formula Ford 1600 races, Tim Blanchard and Jon Miles resumed their battle from yesterday. In Race 3, the pair engaged in a thrilling duel with Blanchard taking honours by just 0.3s, while Miles turned the tables in Race 4.

Miles was a non-starter in Race 5, enabling Blanchard to take a somewhat more comfortable win ahead of Richard Davison and Andrew McInnes.

Ian Cowley drove his Commodore V8 Supercar to victory in all three of today’s AMRS Invited Race Car races. The Oz Trucks of Brett Mitchell and Danny Burgess diced for second position in each race, but Burgess retired from Race 5, enabling Gary Finemore to snare the final podium position in his Ford XB Falcon Coupe.

The traction advantages of having a Porsche flat-six engine over the rear wheels proved useful for 911 driver James Calvert-Jones in Race 3 for the Group S Classic Sports Cars, which was held on a damp track. Jones used his Porsche’s nimble handling characteristics to drive to a 10-second victory over Ross Jackson (De Tomaso Pantera) and Andrew Whiteside (Porsche).

However, once the track dried for Race 4, normality was restored with yesterday’s winner, Ray Narkiewicz using the horsepower advantage of his Corvette to charge back to the front of the field and take the win from Joe Calleja (Mustang).

While some competitors elected not to contest the fifth and final race, Jackson and Calvert-Jones enjoyed a tight tussle with Jackson coming out on top by 0.5s.

Another driver to make use of straight-line performance was Ben Muller, who chalked up a trio of wins in today’s MG and Invited British races in his MGB GT.

AMRS SET FOR 2020 CONCLUSION AT SANDOWN