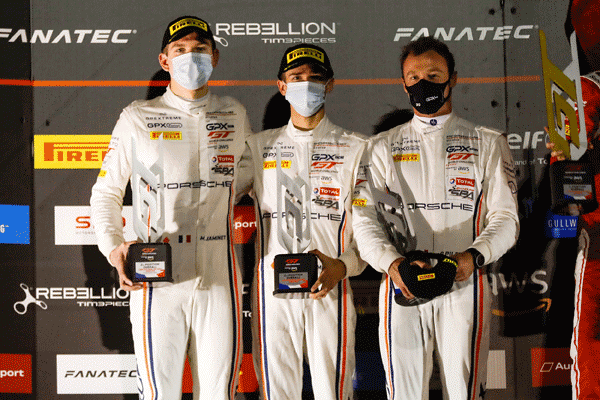 GPX Racing filled the runner-up spot in the GT World Challenge Europe Endurance Cup recently with Aussie Porsche Factory Driver Matt Campbell at the helm with Patrick Pilet and Mathieu Jaminet, who at one point were 17 seconds ahead of the field but ended up second by just under 2 seconds after leading the majority of laps.

The Ferrari team that beat them made a final pitstop that saw them change only two tyres and exiting the pits side by side to the #12 Porsche 911 GT3 R.

Hear what Matt Campbell had to say to Velocity Magazine after the event below, as he heads for his last race of 2020 at Kyalami Grand Prix Circuit in South Africa for the final round of the Intercontinental GT Challenge the Kyalami 9 Hour, 10 – 12 December 2020.  Read also GPX Racings media release below.

GPX Racing was not the favourite for the title on arriving at the Paul Ricard circuit for the final of the most prestigious endurance championship for Grand Touring cars. But the team created by Frédéric Fatien and managed by Pierre-Brice Mena was in contention right to the very end. The #12 Porsche 911 GT3 R led the race for most of its six-hour duration and was finally beaten by less than two seconds. Patrick Pilet, Matt Campbell and Mathieu Jaminet were in second place when the chequered flag fell, which was also where they finished in the GT World Challenge Europe – Endurance Cup drivers’ classification and where GPX Racing finished in the Teams’ ratings. It was a stunning result for a squad that was competing in its first full season in the top category in 2020.

#12 kicked off the weekend by setting the third-quickest time in free practice; then it was the turn of its sister car #40 driven by Romain Dumas, Louis Delétraz and Thomas Preining to figure in the Top 5 in pre-qualifying. The two driver lineups qualified in 8th and 9th places. As soon as the lights went green the team’s hopes were raised as the #12 Porsche moved into a title-winning position. Patrick Pilet quickly fought his way up the time sheets and overtook the two Ferraris that had started on the front row. He slotted into third place and was potentially the points leader when he handed over to Matt Campbell. GPX Racing’s situation got even better when the Australian took second place and then the lead after 90-minutes racing. Unfortunately, shortly afterwards the team had to withdraw #40 after a technical problem caused a fire.

Full Course Yellows, safety-car and sporadic rain didn’t change anything. Pilet got back in the car in first place after Campbell’s double stint where he stayed maintaining a 10-second lead until he handed over to Mathieu Jaminet. Although the Ferrari that was in contention for the title inched slightly closer confidence was running high in the GPX Racing camp. The outcome was decided in the last refuelling stop when the rival camp gambled on changing just two tyres to reduce its time in the pits. It was enough to enable the Ferrari to exit the pit lane just in front of the Porsche still in the hands of Jaminet. Despite pushing like crazy the driver from the Lorraine region was unable to snatch back the lead.

Mathieu Jaminet: “When I saw the Ferrari leave the pits in front of me, it redoubled my motivation. Taking into account the top speed of the Italian car I hoped I would receive some help in the traffic, but the opposite happened. We were more or less on the same pace, but it was their strategy during the final pit stop that made the difference. Had they exited behind me I think the result would have been reversed. Given the qualifying results the outcome looked done and dusted but we put our finger on excellent setups; we were in the title fight right till the end and that makes it all the tougher to finish second. GPX Racing has been a marvelous discovery and it’s crazy the amount of work they’ve done. It’s not at all the same team it was at the beginning of the season. Hats off!”

Pierre-Brice Mena: “The Ferraris were in front of us in practice and we were surprised that we dominated them at the beginning of the race. But they got back on track and in the role of hunters they were able to adjust their strategy and go for broke at the end of the race. They took a risk as nobody tested the behaviour of a car with only two new tyres this weekend I guess; it was a great move on their part. It’s not easy to be objective in the heat of the moment after such a race, but for our first season in Pro with two cars against hyper-experienced teams we’ve really come up trumps. I don’t know if I would have signed for such a result at the start of the season as my will to win is almost too strong! But if anyone had said to me at the beginning of 2019 just when we began our relationship with Porsche that we would be where we are today I wouldn’t have believed them, that’s for sure. To sum up: so near yet so far. That’s what top-level motor sport is all about where the smallest incident can often change the outcome! I’m proud that we were able to fight for the title here at Paul Ricard; Today, we’re up there with the best. I can’t wait to come back in 2021 to try and do even better. Our rivals will be on the lookout for us; we’ll be feared…and fearsome!”