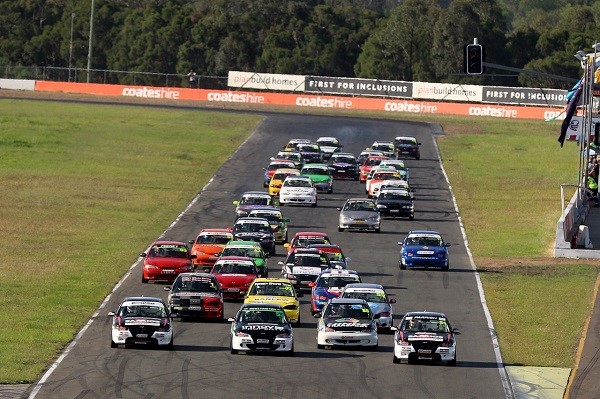 An assortment of talented Sunshine State competitors will battle for glory in five different categories when the Australian Motor Racing Series makes its maiden appearance at Queensland Raceway for Round 3 this weekend.

While the border closures have precluded many interstate drivers and teams from attending the race meeting, each of the categories on the program has nevertheless attracted a quality line-up.

Fresh from his outstanding podium result in the Aussie Tin Tops support class at the Bathurst 1000 last weekend, young gun Nathan Herne heads into the Promaxx Performance Exhausts TA2 Muscle Car Series round as the red-hot favourite aboard his Dodge Challenger.

Herne’s main opposition is likely to come from John McLaughlin, who won the opening TA2 round at Winton earlier in the year.

Tony Quinn’s Aston Martin Vantage GT3 car headlines a spectacular field of Super GT machinery which also contains a fleet of MARC Cars and a Ginetta. The established McElrea Racing outfit will campaign a couple of Porsches in the field, including an entry for rising female star Madeline Stewart.

More than 20 Hyundai Excels will line up for the always-entertaining Series X3 Queensland class, which will stage a quartet of short, sharp and action-packed sprint races. Of the drivers entered for the event, regular front-runners Cameron Bartholomew and Brett Parish are likely to be the main contenders.

Strategy will be a primary focus for drivers and teams competing in the HQ Holden Series, which will feature a twin-driver format. Each of the two drivers will compete in a 10-lap sprint race on Saturday, before teaming up for Sunday’s one-hour endurance race with compulsory pit stops for driver changes.

While the field consists predominantly of the venerable six-cylinder HQ Holdens, there is also an invitational Holden Gemini entry, to be driven by Nick Rangely and former TA2 champ Ashley Jarvis.

The final category on the program is QLD Open Wheelers, which is home to a mixture of thoroughbred race cars including Formula 3, Formula Ford and even David Rodgie’s Chiron LMP3 car. Another notable entry is Cameron McLeod, driving the ex-Paul Morris Van Diemen RF91 Formula Ford.

The on-track action commences with practice on Friday, followed by qualifying and racing on Saturday and Sunday.

A reminder that spectators are permitted to attend this event – gate prices are as below: