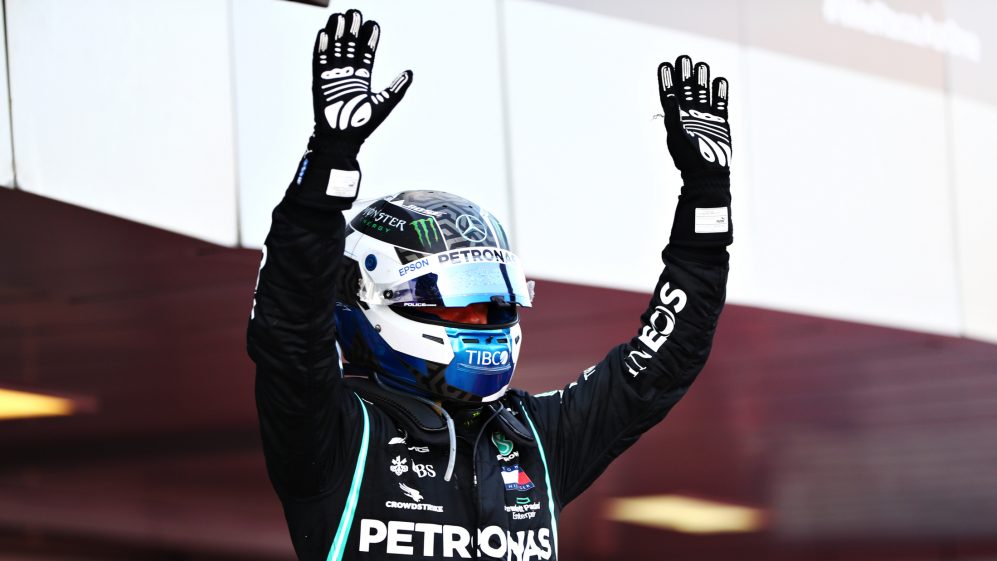 For once it appeared that Valtteri Bottas might have the upper hand in his fight with Mercedes AMG teammate Lewis Hamilton at the Russian Grand Prix.

A different strategy for each driver, borne from the red flag in Q2 the day before, saw Bottas start the race on the preferred medium tyre option, while Hamilton was forced to start with the soft compound. Hamilton also feared that he would be swamped at the second corner by those who had been advantaged by the aerodynamic tow down the long straight towards turn 2.

There was more cause for concern for the British driver when Stewards began an investigation into a possible breach of the practice start procedure by Hamilton during the out lap.

Hamilton made a quick start to lead Max Verstappen towards the first turn. Bottas jumped into 3rd and held an outside line down towards turn 2. The Finn swept into the lead for a fraction of a second only to be run over the kerbs by his teammate at the exit of the corner. Max Verstappen, who had started on the medium tyres, out-braked himself and drove into the run-off area while Daniel Ricciardo glided past and into 3rd. Verstappen kept his foot hard on the throttle, weaved past the foam blocks and stormed back onto the circuit marginally ahead of Ricciardo. Carlos Sainz had also run wide after pressure from Perez and looked to copy the Aston Martin Red Bull only to hit the concrete wall with his left front wheel and spin back onto the circuit.

“I take full blame for that, I’m really sorry,” Sainz radioed to his engineer as the McLaren came to a stop.

Fellow McLaren driver Lando Norris was an innocent victim in the Sainz crash. He managed to avoid his spinning teammate but ran over a significant amount of debris in doing so.

“Arghh, check the car,” Norris told his team. “I ran over a lot of debris to avoid Carlos.” 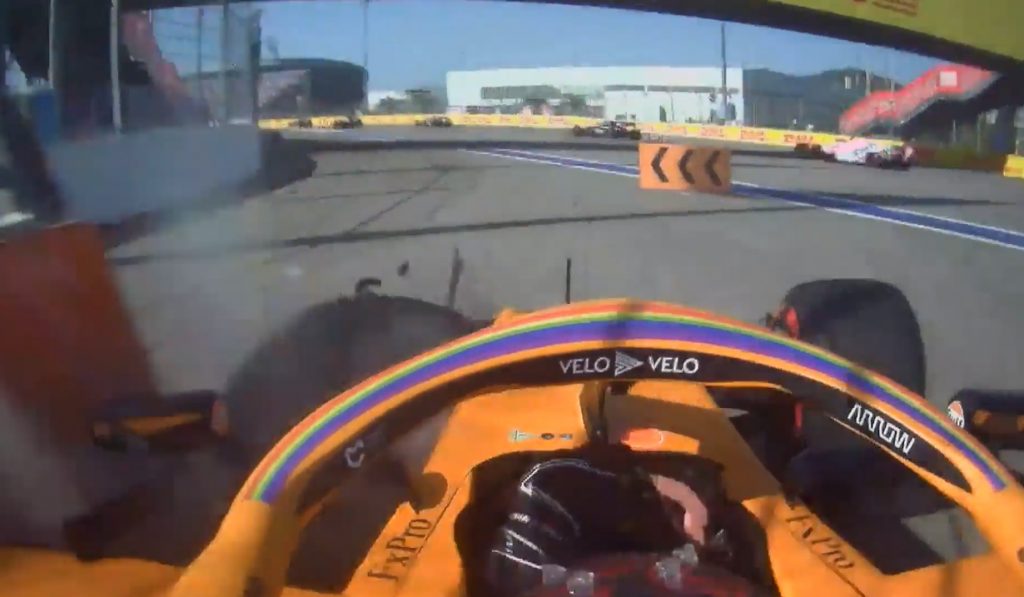 Lance Stroll was another to find the wall on the opening lap when he ran wide and lost grip on the outside kerb then spun back across the circuit to hit the inside wall at the exit turn 4. Stroll told his team that he had been hit from behind, with Leclerc the one to have hit the right rear tyre of the pink Racing Point.

Ricciardo appeared to slow as the yellow flags were waved in sector 1, which was all the welcome Ocon needed to leapfrog his teammate into 4th place. The Safety Car was dispatched almost straight away as Sainz climbed from the 3 wheel McLaren and Stroll stayed inside the damaged Racing Point entry.

The Safety Car period ended on lap 5 and, unlike the previous Grand Prix, Hamilton was quick to accelerate before the line. The field strung out almost immediately as the #44 opened a small gap to Bottas and Verstappen. Ocon and Ricciardo lost over 4 seconds to the leader in a single lap, while Perez quickly closed. As Hamilton moved out to a 1 second lead came the news that the race stewards had issued not one, but two 5 second penalties to Lewis Hamilton for his indiscretions.

“Where is that in the rulebook,” A clearly annoyed Hamilton replied when told of the penalties by his team.

Sergio Perez closed on Ricciardo and ran side-by-side with the Australian through turns 2 and 3 before sweeping into 5th at turn 4. The #3 Renault stopped for the hard compound tyres on lap 16 and returned to the circuit behind Kimi Raikkonen in 14th. Hamilton stopped on the following lap and sat in his pit bay while the 10 second penalty was served. The AMG Petronas Mercedes mechanics then leapt into action and fitted the #44 with the white walled, hard compound tyres. He returned to the track well ahead of Raikkonen and Ricciardo in 11th place, but still bitterly disappointed with the stewards’ decision. 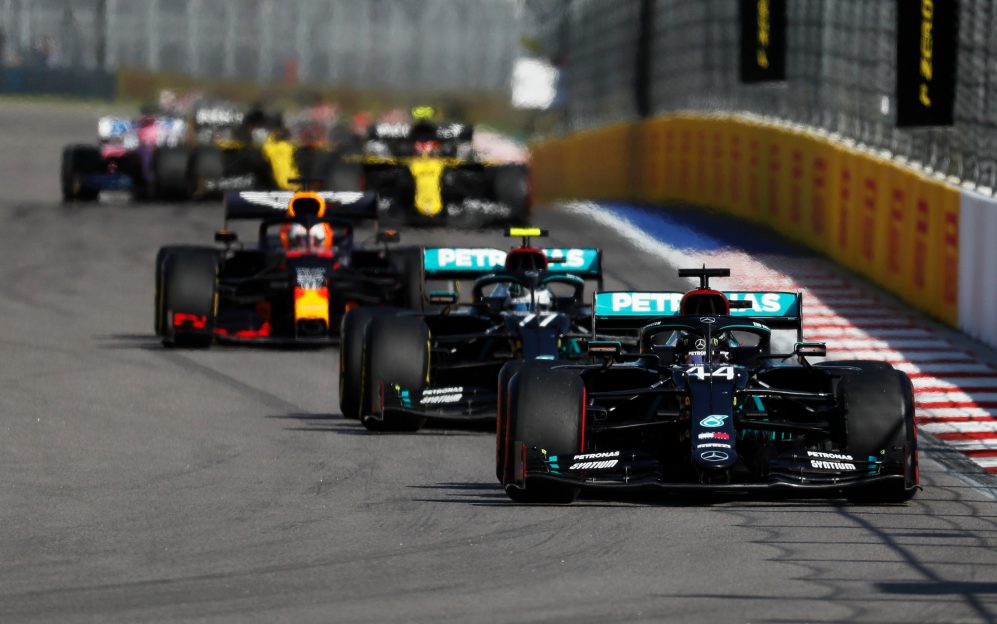 “This is just ridiculous man,” Hamilton told his engineer in a sombre tone as he brought the Mercedes back up to speed. He later radioed his engineer a second time to express his disapproval of the early stop.
“Well you stopped me so early I have to manage now,” Hamilton said. “I’ll struggle to make it to the end. When told that Verstappen was 39.9 he added. “I don’t want any info anymore Bono. It doesn’t make any difference.”

The early stoppers ran the risk of returning to the circuit behind the slower cars that chose to run a longer opening stint. Ricciardo found himself stuck behind Raikkonen and Ocon was held up by Vettel in 7th place. While Ricciardo was able to push past the Alfa Romeo, Ocon struggled behind the Ferrari, which allowed the Australian to close. By lap 23 Bottas led from Verstappen, Leclerc, Kvyat, Hamilton, Perez, Vettel, Ocon, Ricciardo and Raikkonen.

Bottas stopped for the hard tyres at half race distance to cover any undercut from Verstappen’s pitstop the lap before and he resumed with a healthy lead. Ocon was told by the Renault team to let Ricciardo past and did so on the run to turn 2. Ricciardo braked late, locked a brake and then ran over the orange sausage kerb that marked the track limits. He then drove back onto the circuit without following the Race Directors notes that instructed drivers to weave around the foam bollard before re-entering the track. After another Stewards’ investigation, the Australian was handed a five second penalty.

When told by his crew of the penalty, Ricciardo was nonplussed. “Okay,” Ricciardo said. “I’ll just drive faster!” The #3 Renault had moved into 5th place some 9 seconds in arrears of Perez by lap 32. “That’s my bad, I’ll make up for it,” He added shortly after. 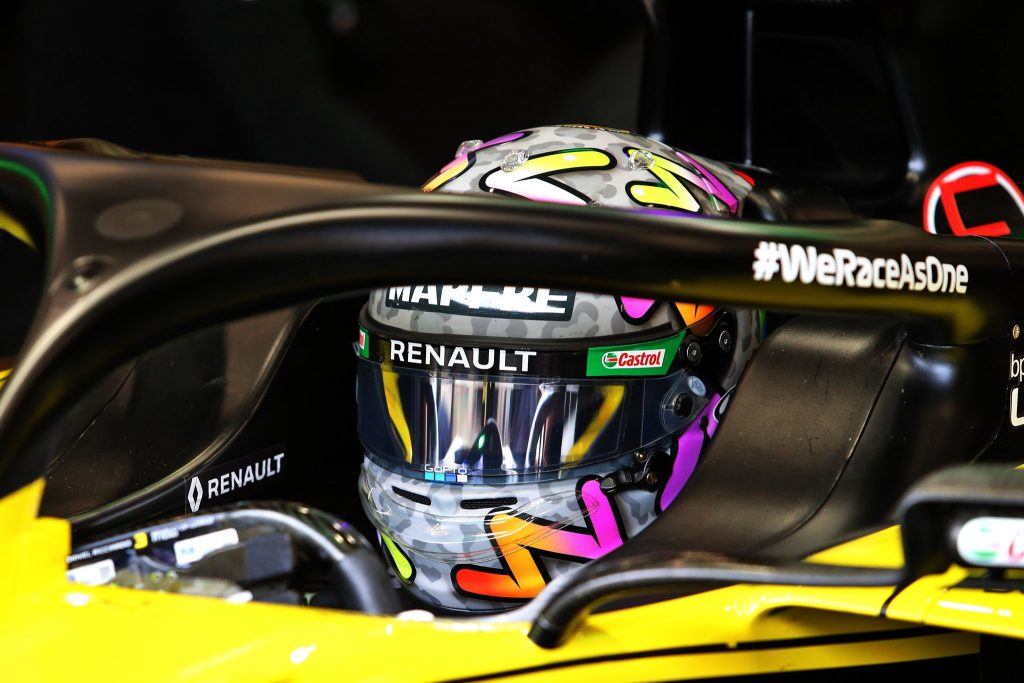 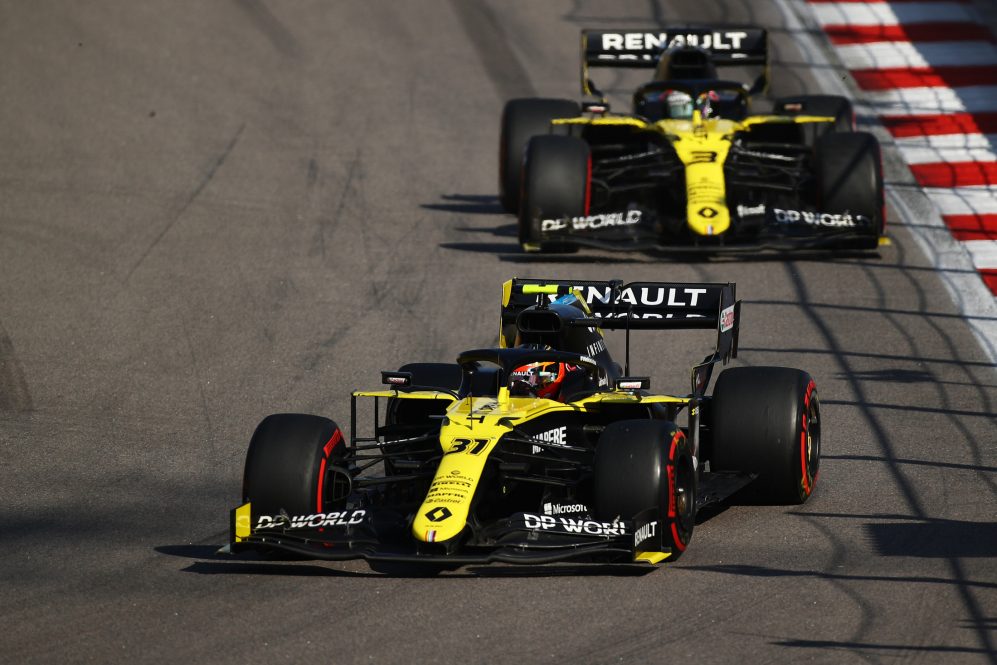 Vettel drifted back through the field on his second set of tyres, having run as high as 7th during the middle stages of the race By lap 43 he had slipped down to 14th, sandwiched between the Alfa Romeos of Giovinazzi and Raikkonen respectively.

While the leaders had strung out with almost 10 seconds between each of the top 6, there was a three-way battle for 9th place on lap 46. Norris held that place and fought doggedly to hold out Albon and Gasly. A failed attempt at turn 10 by Albon saw Norris streak away with Gasly also distracting the Aston Martin Red Bull driver with a half move around the outside. The Alpha Tauri driver took 10th from Albon with a move down the back straight on the approach to turn 10.

Valtteri Bottas went on to win the Russian Grand Prix by 7.729 seconds from Max Verstappen. Lewis Hamilton climbed back to 3rd, with Perez and Ricciardo completing the top 5. The Renault driver finished 15 seconds ahead of 6th placed Leclerc and managed to keep his place after the 5 second penalty was applied. Ocon, Kvyat, Gasly and Albon completed the top 10 after Norris fell down to 15th during the final laps of the race.

“Yes mate, get in there, Yes aha!” Bottas shouted down the radio on his cool down lap. There was also some harsh words for his critics as his heart rate began to subside.

Lewis Hamilton made no secret of his disappointment with the penalty during the podium interview.

“First I’d like to say thank you to the fans who came, so thank you,” Hamilton said to Sky Sports. “Yeah it’s not the greatest day, but it is what it is. It doesn’t matter, it’s done now,” Hamilton replied when asked to explain what had happened with the practice starts. “I’ll take the points that I got and move on. I didn’t really do much, I just held my position,” Hamilton answered when complimented on his comeback drive. “Congratulations to Valtteri,” Hamilton added to conclude the interview. 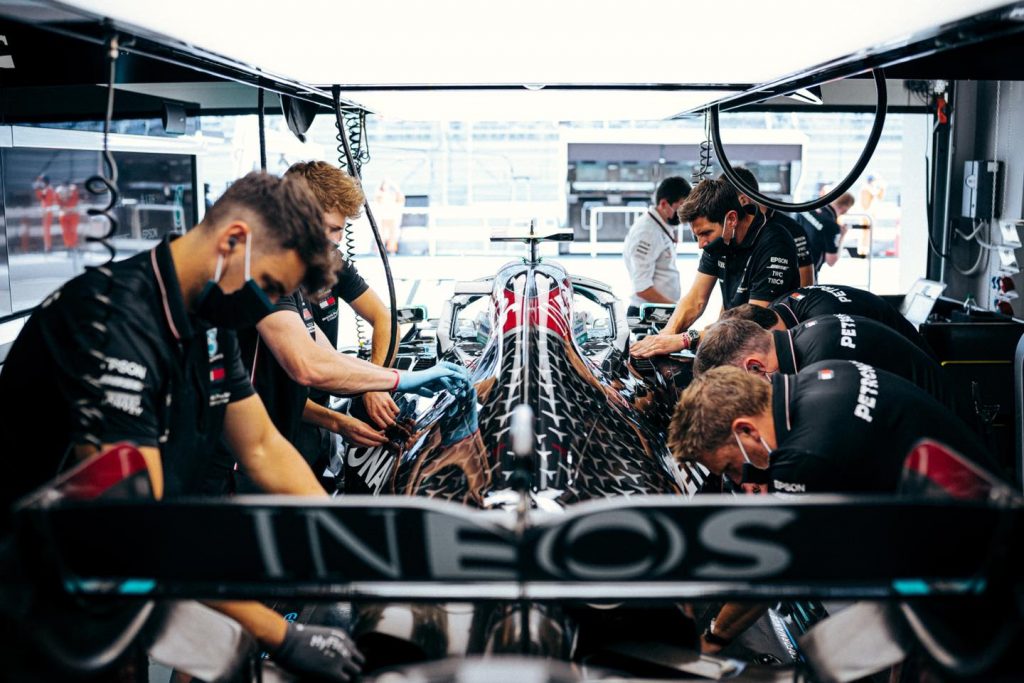 While Hamilton was unimpressed and subdued, Valtteri Bottas was delighted with his good fortune.

“I knew the start was going to be the first opportunity to pass,” Bottas explained to Sky Sports. “Actually, it was a bit compromised because there was something like a massive bee that hit my visor as we were braking. I couldn’t believe it when I was braking and that was why I went too deep. But I knew it was going to be a long race after that with the medium tyre. Then Lewis got the penalty so once I was in clean air the pace was pretty awesome and I could really control everything. Never give up, I had a good day.” 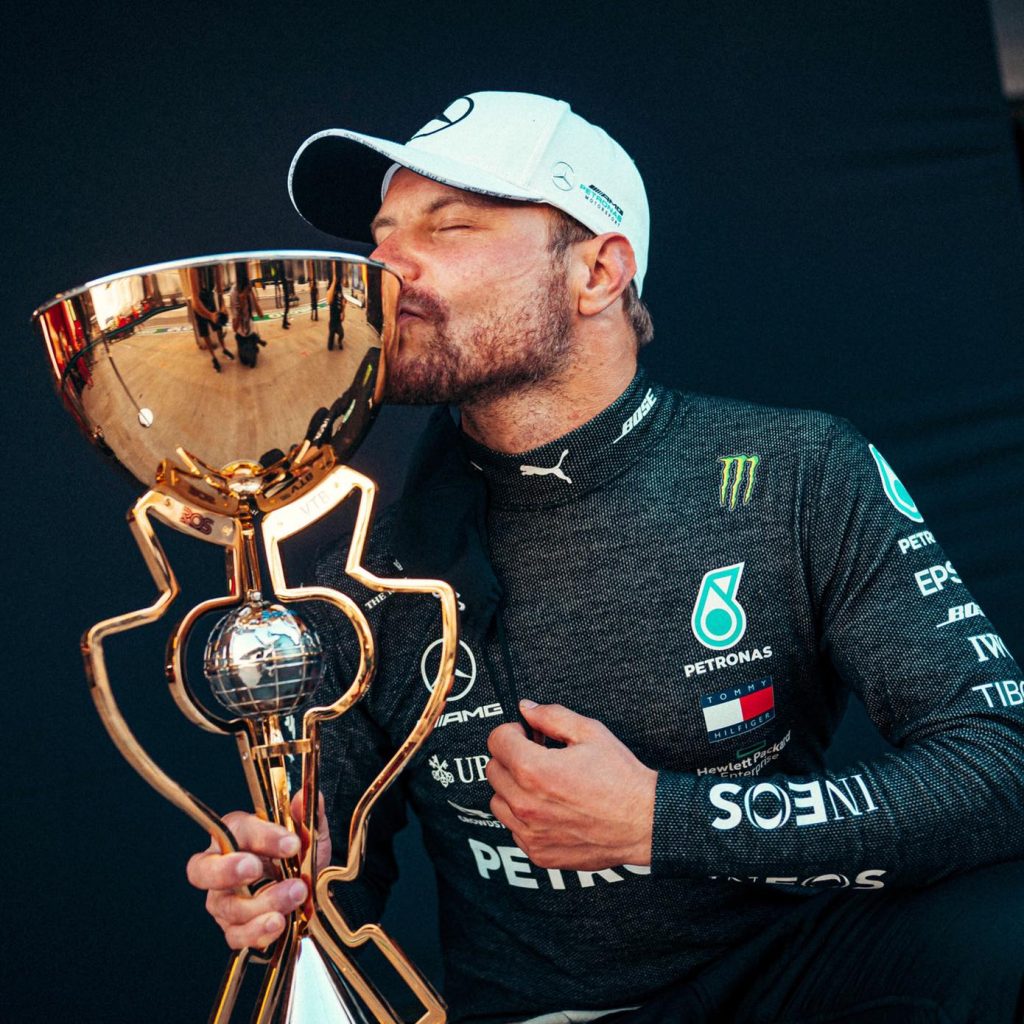 Lewis Hamilton offered more of an insight into the practice start penalties and implied that there was more behind the decision than just the Race Director’s notes.

“I need to go back and see what the rules are, what exactly I did wrong,” Hamilton said to Sky Sports. “I am pretty sure no-one has got two five-second penalties for something so ridiculous before. I didn’t put anyone in danger, I have done this at a million tracks over the years and never been questioned. It is what it is. Of c

ourse it is, it is to be expected. They are trying to stop, aren’t they? But it’s okay. I need to keep my head down and stay focused and see what happens.”

Hamilton was again questioned on the matter during the driver’s press conference.

“I don’t necessarily think it’s for me,” Hamilton explained. “Whenever a team is at the front they are under a lot of scrutiny. Everything we have on our car is being checked and triple-checked. They are changing rules, such as the engine regs, lots and lots of things to get in the way and keep the race exciting, I assume. I don’t know if the rules, what happened today, are anything to do with it, naturally, that’s how it feels – that we are fighting an uphill battle. But it’s okay, it’s not like I haven’t faced adversity before, so we just keep our heads down, keep fighting, keep trying to do a better job, be cleaner, squeaky clean.”

It was later confirmed by the AMG Petronas Mercedes Team that Lewis Hamilton had mentioned that there was a build up of rubber near the designated practice start area and asked for permission to do so further down the lane. He was told that it would be fine, but to leave room for other cars. Toto Wolff offered his personal explanation for Hamilton’s remarks post race to Sky Sports.

“The stewards said it’s not the place where you would do a race start and I agree with that,” Wolff explained. “But in the director’s notes, you can make practice starts after the lights on the right hand side. And that’s what he did. So there is room for interpretation and we clearly have to analyse why we made the mistake altogether and just take this one on the chin even though with the stewards, we agree to disagree.”

“I think Lewis has faced a lot of adversity in his life and for all of us, the penalty seems a little harsh. Never before a pre-race or reconnaissance lap infringement been penalised with an in-race penalty. That’s new. Things go against him harshly sometimes. I guess if you’re the most successful driver, you have to take that.”