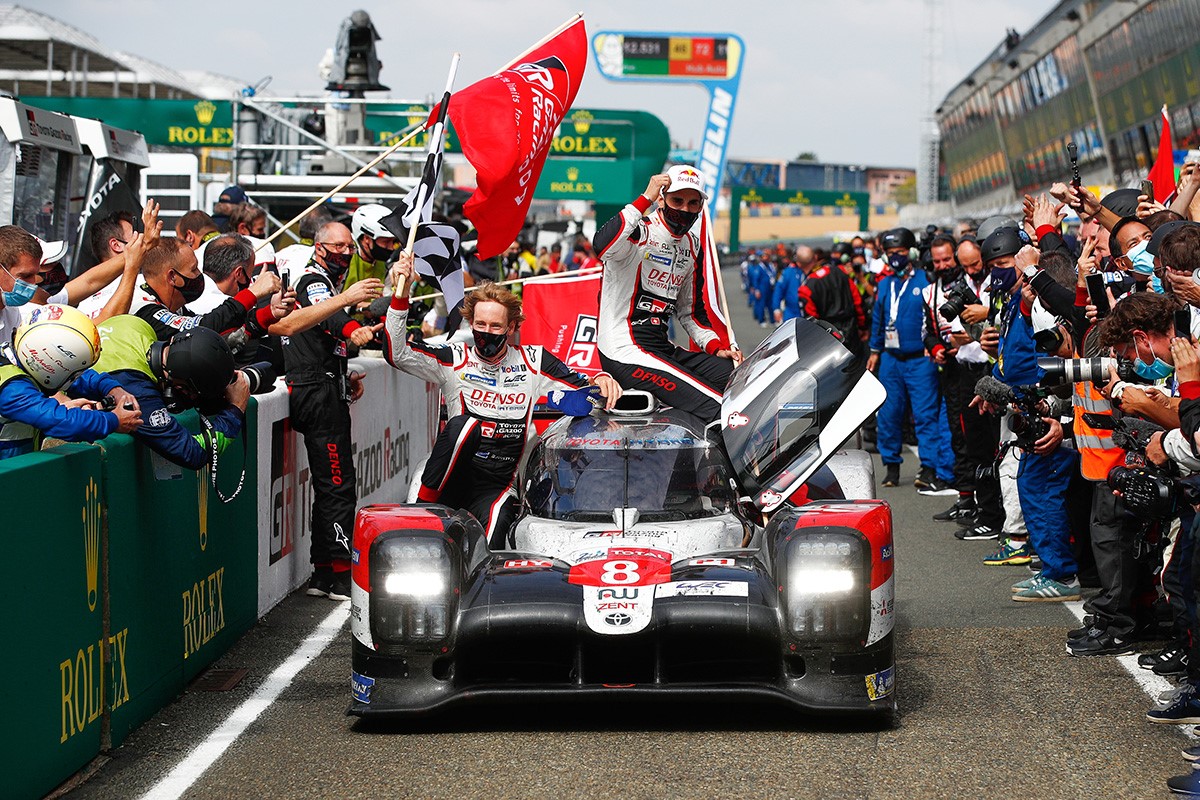 Sébastien Buemi, Kazuki Nakajima and Brendon Hartley completed over 5,000km of a gruelling race, held for only the second time in September, and won by five laps in the #8 TS050 HYBRID, to take the lead in the drivers’ World Championship.

For Sébastien and Kazuki, this was their third consecutive Le Mans triumph and they join only seven previous drivers who have achieved that feat in the race’s 97-year history, while Brendon won for the second time following his victory in 2017.

The pole position #7 TS050 HYBRID of Mike Conway, Kamui Kobayashi and José María López had looked on course for their first win at La Sarthe until an exhaust problem, although they fought back to earn third place in a dramatic final 70 minutes.

Today’s victory, in the penultimate round of the FIA World Endurance Championship (WEC), means TOYOTA GAZOO Racing is crowned Teams’ World Champions, holding an unassailable 57-point lead over Rebellion Racing, its third title following those in 2014 and 2018-2019.

The race marked the final appearance at Le Mans for the 1,000PS, four-wheel-drive TS050 HYBRID which has set a new standard in terms of efficiency and performance at La Sarthe. Using 35% less fuel than the first generation of LMP1 hybrids from 2012, the TS050 HYBRID performs around 10 seconds a lap faster. It holds the fastest-ever lap and the race lap record alongside its four consecutive pole positions and three victories.

Those achievements inspired the GR Super Sport, a hypercar born in Le Mans, so it was fitting that it made its public track debut moments before the race start. A customised development version completed a demonstration lap before returning the winners’ trophy just before the 2.30pm start, for which the #7 lined up on pole position, with the #8 in third.

Aside from 10 laps around the six-hour mark, the #7 held the advantage at the front of the field, building a one-lap lead by half distance. But shortly before 3am, with Kamui at the wheel, it suffered a drop in power which forced it into the garage. A damaged exhaust manifold was replaced in less than 30 minutes and Kamui re-joined in fourth place, six laps off the lead and four laps behind the third-placed #3 Rebellion.

That left the #8 in a clear lead, having recovered from its own troubles first with a puncture, then a debris-damaged brake duct which cost time at two pit stops before a 10-minute repair in the seventh hour. But they never gave up and fought back into second place before the issue for #7. 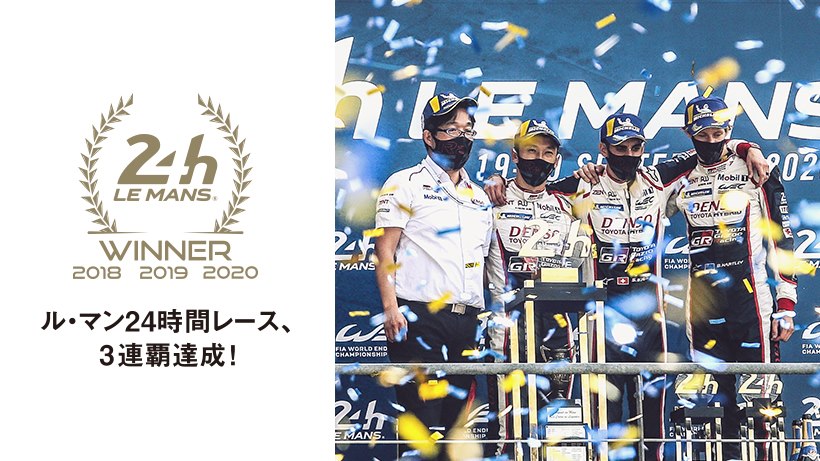 Now with a healthy lead, Sébastien, Kazuki and Brendon controlled the rest of the race from the front, establishing a five-lap lead. For the third consecutive year, Kazuki crossed the finish line to win the Le Mans 24 Hours, cementing his status as the most successful Japanese driver at La Sarthe.

Mike, Kamui and José initially made up ground on third place but the #7 sustained floor damage after hitting debris, which compromised aerodynamic performance. However, the podium battle came alive in the final hour when the #3 Rebellion first crashed on track and then could not exit the pits, allowing José to earn third, taking the flag six laps behind the sister #8 car and one lap adrift of the second-placed #1 Rebellion.

A significant points swing in favour of the #8 crew at Le Mans means the race for the drivers’ World Championship title therefore goes down to the last race of the 2019-2020 season, on 14 November in Bahrain. The #8 car holds a seven-point lead with a maximum of 39 available in Bahrain.

“Again we have seen what a difficult challenge the Le Mans 24 Hours is; it is a true endurance test. We showed great team spirit and determination to overcome the early troubles for the #8 car, and winning three consecutive Le Mans with the TS050 HYBRID is a dream come true. Well done to everyone in the team on this achievement. However, we set ourselves the target of another one-two finish and I am sorry for the #7 drivers, mechanics and engineers who worked so hard and performed so well again. We are one team, so we all feel their pain. We missed experiencing these highs and lows with the fans at the track but I hope we can meet again here next year. Congratulations to Rebellion for their podium; they pushed us and once again earned our respect. Thank you to the ACO for giving us the chance to enjoy Le Mans despite the global circumstances this year.”

“Le Mans hasn’t been the kindest to us over the years. We are happy for TOYOTA GAZOO Racing to earn its third win in succession but on our side of the garage it feels as if another win got away from us. We are sad about that, also because it changes the World Championship situation massively. This means two big hits in one race. We always come here to do a good job but some things always seem to get in our way. But well done to the #8 guys and the team for another win here.”

“Third is not the result we expected or wanted. We were very fast again here but the race always seems to be hard on us. We did a good job and so did the team fixing the car in the night. The problem was very unfortunate, it appeared for the first time and then in an important race like this one, but this is Le Mans and these things can happen. Congratulations to car #8 and the team who have worked as hard as they can to get two cars to the finish line.”

“First of all I would like to congratulate the team and car #8. It is a big achievement for TOYOTA GAZOO Racing to win this big race for the third time in a row. The team has worked very hard, day and night. Everyone did a fantastic job, including Mike and Kamui, and I think I also did my part. Unfortunately it did not end as we wanted for our car. It is frustrating to be so fast but not to win the race, but we will keep trying.”

“I feel great. My team-mates and the team have done such an amazing job. The race once again showed how quickly the luck can turn here at Le Mans. When we started the race, I had the feeling everything was against us; slow zones, punctures and a problem with the brake cooling. But then all of a sudden things started to go well and we were leading the race then soon we were leading by five laps. Le Mans again proved that you never know what will happen until the race is over.”

“It is special to be in the last TS050 HYBRID to win Le Mans and to achieve three victories in a row is fantastic. We had a race of ups and downs but everybody did a really good job, include our sister car. Somehow we seem to have a bit more luck than the other car. When the #7 car had the issue, it was all about winning the race for TOYOTA GAZOO Racing and this was quite tough. I am really happy to achieve it and be part of this team.”

“I am proud of my team-mates and the whole team around us. It has been a learning curve for me coming to this team. Séb and Kazuki have helped me getting up to speed in a very fast and complex race car. Today we had some little issues at the beginning but then we had a perfect race, thanks to an amazing group of engineers and mechanics behind the scenes. Everything was executed really well, so a big thank you to TOYOTA GAZOO Racing.”