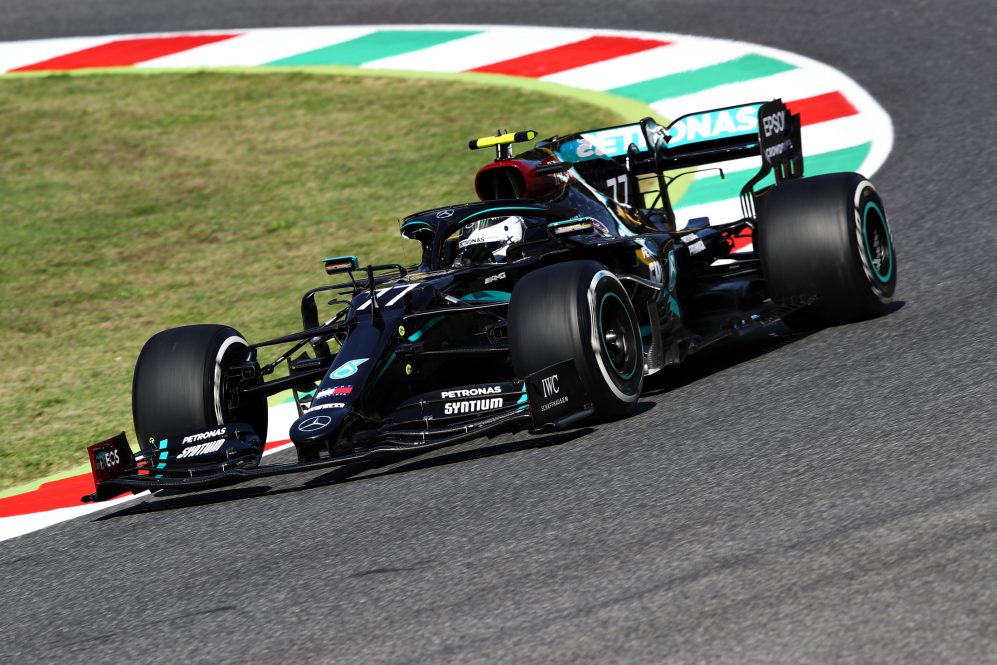 The script remained the same at the Tuscan Formula One Grand Prix with Valtteri Bottas the fastest runner at the end of the day from Lewis Hamilton and Max Verstappen. There was less than a second between the top 4, with the red walled soft tyre the choice of the day.

Toto Wolff explained to Sky Sports that the first session at Mugello had been a learning experience for all the teams, which suggested that both the times and grid order will change as they gain more data on the circuit on the ideal car set-up. The elevation changes and flowing nature of the circuit may make overtaking more difficult, which will add even more importance to the qualifying session on Saturday. With that in mind, the performances of Mercedes, Red Bull and Renault, which finished in team formation, suggests that they are on target for Q3.

Martin Brundle compared the Mugello circuit with a giants snake “About to crush you and consume you as the track just weaves all around you. So many of the corners either fall down hill or climb uphill gently as well. There is a 41 metre undulation here.”

Lando Norris was the first to be bitten and brought out the red flag after a crash at the Turn 3 Poggio Secco. He dropped the left front wheel over the inside kerb which snapped the McLaren into a tank slapper which ended in contact with the outside wall in a high speed accident. Norris was rather fortunate that the car more or less ran along the wall as opposed to a full force impact. The incident non-the-less still tore the front wing from the car and left the British driver momentarily stunned.

“Argh, I’ve crashed,” Norris radioed to the team. “Yeah I’m good,” He replied when asked if he was oaky. “I don’t think I can make it back, sorry about that,” he added.

Kimi Raikkonen was the fastest of the Ferrari engined entries on Friday and took 9th place, with Chales Leclerc 10th as Ferrari celebrates their 1000th Grand Prix start. Raikkonen’s session was disrupted by an incident with the Racing Point of Sergio Perez which ended with the Alfa Romeo dropping bits of gravel onto the circuit after a spin into the gravel at the Turn 1 San Donato corner.

Replays showed Perez leave the pits and turn into the corner as Raikkonen turned towards the apex, swept across the Racing Point at speed and was hit in the right rear tyre. A second red flag period followed as Marshals removed some small pieces of debris from the circuit.

“I don’t know what happened, but a car came from the pits,” Raikkonen said.

The was also a problem for 12th placed Sebastian Vettel as the session came to a close.“The engine stopped,” Vettel radioed to his team as he toured back towards the pit lane at the end of the session. The #5 Ferrari pulled to the side of the track with Vettel pointing to the front of his cockpit as the Marshals gingerly approached the stationary machine.

“It’s been a lot of fun today and I’ve enjoyed every single lap,” Valtteri Bottas told AMG Petronas Mercedes media. “The whole opening section with the high-speed chicanes and the second sector is just amazing and the car felt pretty good out there. I struggled with quite a lot of understeer in the first session and still in places in the second session, but it felt better. I think there’s still quite a bit of lap time to unlock, both in the car and also as a driver. This track is definitely one of the most physically demanding. We’ll only properly get to see the effects of that in the race distance, but even today, I could feel it and it’s going to be tough for everyone on Sunday. It’s also quite unforgiving, with little margin for error and that’s how it should be.”