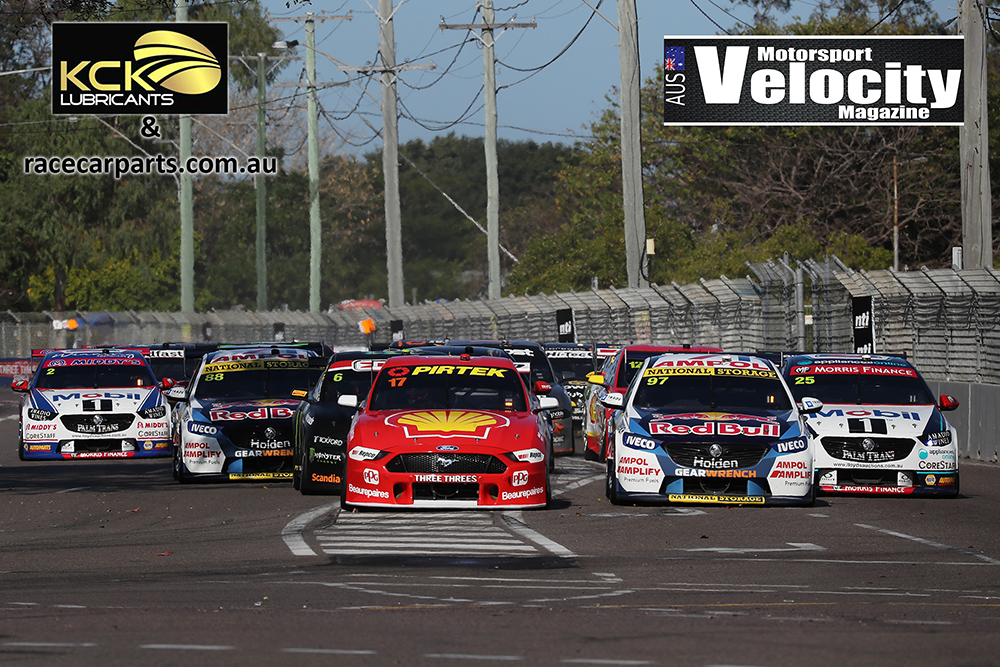 Scott McLaughlin shared the front row with Shane van Gisbergen for the opening race of the weekend, with Cameron Waters and Anton De Pasquale on row 2. Chaz Mostert, Todd Hazelwood, Jamie Whincup, Nick Percat, Jack Le Brocq and David Reynolds completed the first five rows on the grid. McLaughlin had been in a league of his own during qualifying and enjoyed a 2/10ths of a second gap to his nearest rival.

McLaughlin used his pole position starting place to great advantage and moved over to cover van Gisbergen on the run to the first turn. Hazelwood’s great starting position became a potential disaster when he stalled on the grid. Those behind swerved to avoid the stationary BJR Commodore as a flurry of waved yellow flags warned those further down the grid of the impending danger ahead. 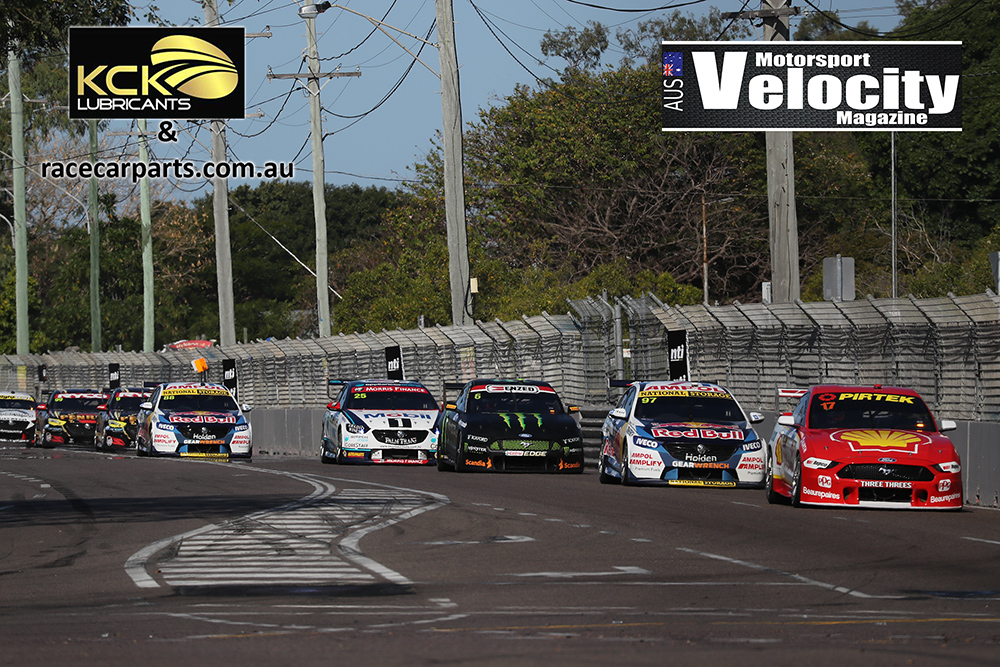 Whincup moved ahead of a slow starting De Pasquale, who also came under friendly fire from his Penrite Racing teammate, David Reynolds under brakes at turn 2. Despite the usual bump and grind around the Reid Park circuit, the field remained largely in tact throughout the opening lap, with McLaughlin ahead of van Gisbergen, Waters, Mostert, Whincup, Reynolds, De Pasquale, Percat, Coulthard and Fullwood. Hazelwood was the big loser and dropped to last after finally firing up the Black Duck Seat Covers entry.

The leaders took their stops just shy of half distance, with Whincup the first to blink. The RBHRT car took service for rear tyres only. Race leader McLaughlin stopped on lap 18, which handed the lead to van Gisbergen from Waters, Mostert, De Pasquale and Percat.

David Reynolds had stopped on lap 16 only to encounter a mechanical issue on track that left him momentarily stationary at turn 2. He managed to restart the car and drove back to the pits for another stop. He returned to the track well down the order.

McLaughlin returned to the track with the effective race lead and a comfortable gap to Whincup in 17th place. Shane van Gisbergen held a 15 second advantage of the field when a plume of smoke began to trail the #97 Commodore. The Kiwi driver was fortunate to keep the car off the wall as fluid dropped onto the rear wheels as he made his way towards the pits. Suggestions of a steering rack issue were raised by over the team radio as van Gisbergen made his compulsory. The team replaced the steering wheel with a larger diameter wheel and then sent the car back out with wafts of smoke still spewing out from underneath the car. A mechanical black flag was quickly directed towards the RBHRT Commodore as smoke and fluid continued to flow from the car.

Whincup drifted back as Waters and Mostert took advantage of their fresher tyres to pass the #88 Commodore on lap 25 of 39. As the laps dwindled down, McLaughlin held a 3.5 second lead over Waters, with Mostert a further 5 seconds in arrears. Scott Pye and Rick Kelly had been the big movers over the course of the race and had climbed 8 and 11 places from their respective starting positions. 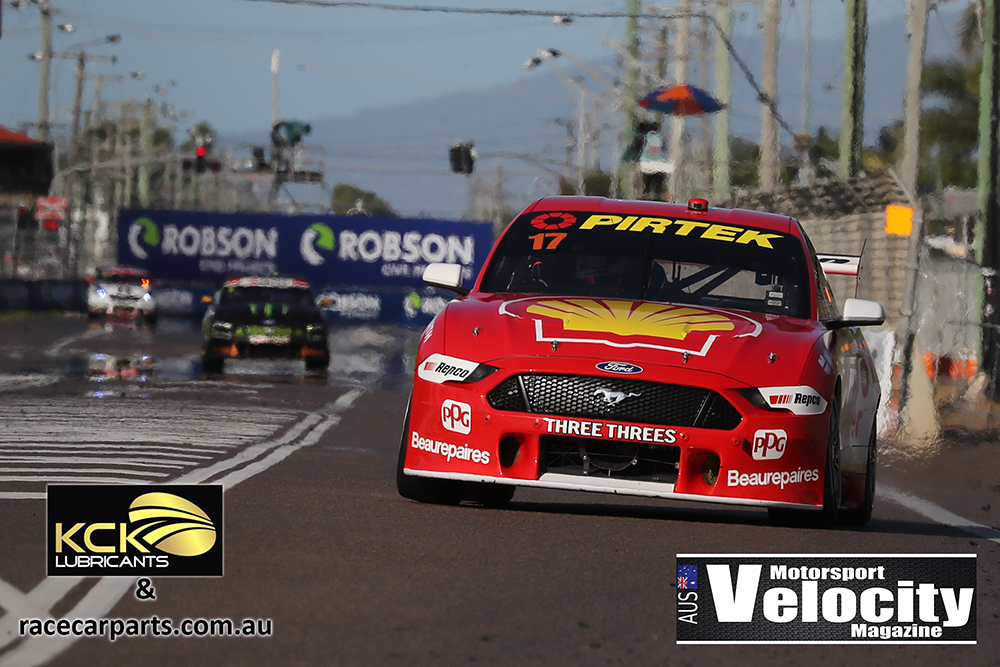 “We had a great qualifying car that we worked on all this morning,” McLaughlin explained to Fox Sports. “We didn’t change the race car from last week. Goes well for us, very happy, feeling a bit tired but all good,” Mclaughlin added in reference to the decision to race without the aid of a cool suit. “I’m pretty happy, just hot when I get out of the car. It’s fine, we’re as good as good and well press on tomorrow without it and have some fun.”

Cameron Waters took another 2nd place, his fourth podium from the five races over the past two weekends.

“Tried a lot of things in practice to try and help what we lacked last week,” Waters told Fox Sports. “I think we’ve fixed some, but Scotty, most obviously, is still pretty quick. Awesome to back on the podium and greater all the boys, the sponsors and let’s hope we can do a little bit better tomorrow. I’m pretty motivated, I hate losing as everyone does. We’ll keep working and will take him (McLaughlin) down.”

“We’re obviously pretty lucky to pick up the last podium, with Shane and whatever happened to him,” Mostert said to Fox Sports. “I think we’ve got top 5 pace, just need to take a step forward to get podiums, but I think we’re learning a lot. The more I drive this car, the more I’m getting the feel for it and the more the things that are wrong with it. I’ll de-brief with Adam after this one and probably make a plan for the next round.”