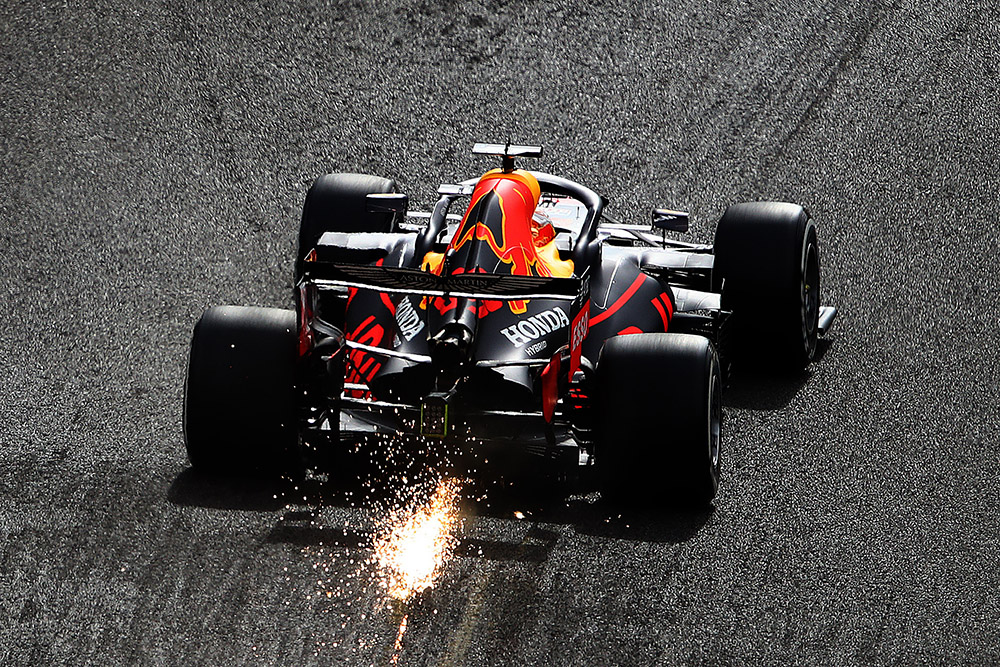 Max Verstappen ended Friday practice with the fastest time on the red wall Pirelli soft compound tyre. Daniel Ricciardo was a surprise in second place as the Mercedes duo of Lewis Hamilton and Valtteri Bottas both endured moments at the Bus Stop Chicane on their respective flying laps.

“The car seems to be handling well, it is of course early days but from our side it was a positive Friday and overall I’m pretty happy,” Verstappen said to Red Bull Media.  “A racing car is never perfect and you always try to find things on the car and with the tyre prep that you can improve, so we will be looking at that tonight. Personally, I think Mercedes are still struggling a bit with the balance and I expect them to be stronger tomorrow. You can see already that they are very competitive on the long runs and I don’t think I will be fighting them for pole because we can’t really follow when they turn it up in qualifying. If we can at least be a bit closer that would be good ahead of the race. It was important to get some decent dry running today, even if the conditions change over the weekend, so we can find a good baseline. It’s never easy around Spa to find the perfect downforce level and you can see everyone trying different things, but I think we are in a reasonable place and we will find out tomorrow exactly where that puts us.”

Ricciardo’s one lap pace was tempered somewhat by an issue with his Renault which sidelined the Australian during the final portion of the session.

“It was another good FP2 as has been the case for us at the last few rounds,” Daniel Ricciardo told Renault Sport Media. “We have to do it tomorrow, though, as that’s when it counts. Today was strong, even with the issue at the end. For safety, we pulled the car over as there’s no point taking risks with mechanical issues on Fridays. Our low fuel run was a good one. During the lap, I knew it felt good and sometimes you just know when the car’s working. I knew it was competitive and I wasn’t that surprised it was up there on the timesheets. It was a good day and we certainly understood a lot from it.”

Hamilton managed the 3rd fastest time in the session, narrowly ahead of Alex Albon and Sergio Perez, with Valtteri Bottas 6th.

“It’s very close out there between Red Bull and us,” Hamilton told F1.com.“I think they might be a little bit quicker even at the moment. Racing Point are also looking strong, they’re right with us as well and so was Daniel [Ricciardo] in the Renault. It’s really close with everyone and we have to understand why; whether they’ve taken a step forwards or we’ve taken a step backwards. So we’ve definitely got some work to do overnight, dig through the data and try and dial in the car a little more.”

While most eyes were on the battle at the head of the time sheets there was some concerns at the other end of the grid as the Ferrari powered teams languished near the rear of the order. Charles Leclerc logged the 15th fastest time, while Vettel sat two places behind. Grosjean and Magnussen trailed the field after missing the opening practice session with power unit problems. Both Haas cars had power unit related replacements completed in time for a limited run in FP2.

Ricciardo brought out the Virtual Safety Car after stopping on the Kemmel Straight, while the session was also stopped briefly after an advertising board had fallen from its place near the circuit.