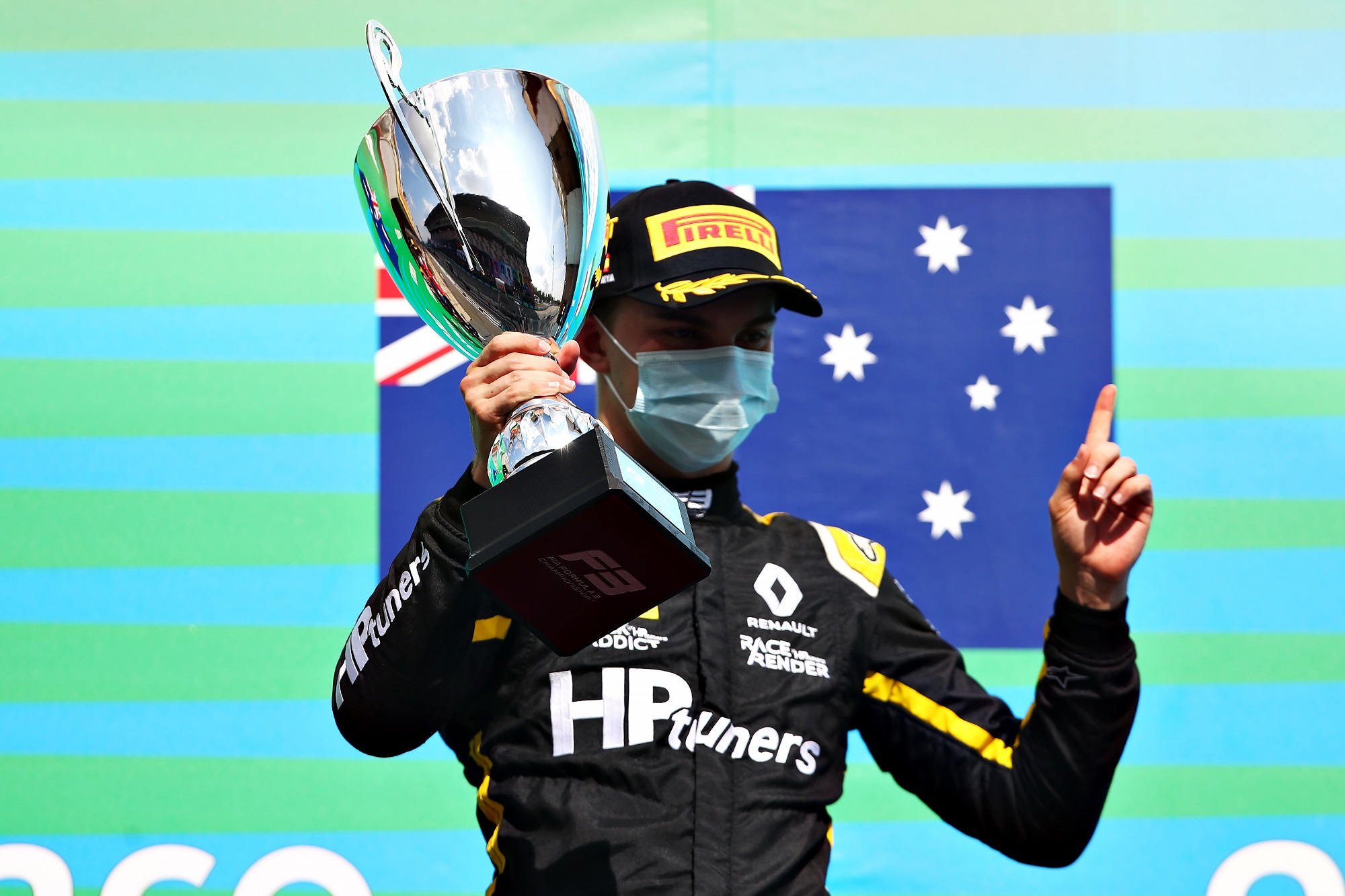 As we first reported on Sunday evening two young Australian FIA Formula 3 drivers lead the way of the 30 car field, Victorian Oscar Piastri took out the win from Tasmanian Alex Peroni, here is our full race reports from their most excellent race weekend.

Logan Sargeant led Jake Hughes and Liam Lawson at the start of the race, while Adrian Fernandez caused David Beckmann and Alex Peroni to take evasive action when he was slow to react to the lights. Clement Novalak pushed Oscar Piastri off the track at the exit of turn 2 on the opening lap.

The race was neutralised moments later when Bent Viscaal was left stranded in the gravel at turn 5, which brought out the Safety Car. Sergeant remained in front when the race resumed on lap 4 with Hughes tucked in behind the leader. The field ran single file through turn 1 as drivers brought the hard Pirelli tyres up to temperature. Piastri made a clean pass on Nokalak to reclaim 4th place on the same lap.

Hughes used the advantage of DRS to move into the lead on lap 7 with a move around the outside of Sergeant at turn 1. A second Safety Car was introduced on lap 9 after Frederik Vesti stopped on track with a mechanical issue. Oscar Piastri ran wide on the run towards the restart and was passed by Novala and Beckmann before the control line. Theo Pourchaire also looked to take advantage of the Australian’s error, but Piastri was able to cover the move.

Liam Lawson maintained a DRS position just behind Sargeant which enabled Hughes to pull out to a comfortable 2 second lead, while Novalak, Beckmann, Piastri and Pourchaire remained within 3/10ths of a second from each other. Lawson looked to pass Sergeant at turn 1 on lap 18, only to find the Prema car move across to protect the line. The Kiwi driver repeated the move on lap 20 with more success and held his line to take the position at turn 2.

Strong results for Alex Peroni and Oscar Piastri in race 1 had the pair in good position for the start of race 2. Peroni lined up 3rd on the grid directly behind Rookie Jenzer Motorsport driver Matteo Nannini, while Piastri sat right behind his Australian compatriot.

As the lights faded out, Nannini overcooked the throttle and spun the rear tyres. He quickly moved right to squeeze second placed Richard Verschoor and protect the race lead on the approach to the first turn. The move opened the outside line and Peroni took full advantage of the opportunity to sweep around Verschoor and Nannini for the lead. The Tasmanian driver led into turn 1 and was fortunate to survive a touch to the right rear from the Jenzer driver mid corner. It was enough to unsettle the Campos Dallara and forced Peroni wide as he fought to control his sliding car, which in turn slowed his exit speed. Oscar Piastri seized the opportunity and utilised a better exit speed through turns 2 and 3 to make a move for the lead on the inside at turn 4. Peroni was forced to cede 2nd place to Nannini shortly after when the Italian locked a wheel during an ambitious passing move at turn 5.

The race was then neutralised with the cars of Max Fewtrell and Olli Caldwell stranded in the gravel. The pair forced off track after and incident between Dennis Hauger and Leonardo Pulcini saw the Italian driver spin across the racing line at same turn as Peroni’s near miss.

“There was some questionable driving on that first lap and the Stewards need to have a look at those,” race 1 winner, Jake Hughes radioed to his team. “Everbody just wants to push people wide, they don’t care.”

The race resumed at the start of lap 6 with Piastri controlling the field before accelerating away at the penultimate corner. The Prema driver exercised some caution at the final turn to ensure that there was no repeat of the slide across the kerbs in the previous race. Nannini was unable to match the Australian’s opening lap pace as the tyres came up to temperature and was soon out of DRS range as Piastri set the fastest lap of the race on lap 8. Peroni, on the other hand had stayed closer to the rookie Italian and set himself for a potential passing move when the DRS zones became active. Jack Doohan was having perhaps his best run of the season as he battled with Novalak and Hughes for 10th place. Calan Williams was also well inside the top 20 in a dice with Zendeli.

Alex Peroni made it an Australian 1-2 when he used the advantage of DRS to sweep inside Nannini on lap 11 at turn 1, with Piastri over 2 seconds further up the road. Piastri appeared to be well in control of the race as he extended the lead over Peroni to 3.049 seconds, while Peroni seemed equally comfortable with a 0.7 second gap to third places Nannini. Championship leader, Logan Sergeant, sat in 5th behind Richard Verschoor. Pourchaire, Lawson, Fittipaldi, Beckmann and Hughes ran line astern to complete the top 10, with Novalak and Doohan also in the freight train of cars.

A second Safety Car on lap 15 when Federico Malvestiti found the gravel, looked set to disrupt the status quo over the final laps of the race. The race resumed two laps later with Piastri and Peroni quick to place a 1 second gap between each other and 3rd placed Nannini. Both drivers were given instructions to push and Peroni responded with the second quickest lap of the race, though any chance for the win was lost with a small error by the Tasmanian driver at turn 1 saw Piastri skip out of DRS range.

Oscar Piastri went on to take his second win of the season and, with the fastest lap of the race, moved to within 1 point of the Championship leader. Alex Peroni’s second place saw him move to 58 points in the championship and 8th place overall. Nannini finished 3rd from Verschoor, Sergeant, Pourchaire, Lawson, Fittipaldi, Beckmann and Hughes. Calan Williams climbed to 14th at the finish, one place ahead of Jack Doohan.

“I’m very happy with that,” Oscar Piastri told F3 media. “It had been an average weekend so far, but we made up for it in that one. A massive thank you to the team for a great car, not just today, but all year. We are definitely back with some strong points in the one and I am looking forward to the next three- let’s try and win this one!”

For Alex Peroni, the result was somewhat bittersweet. If not for the touch from Nannini at turn 1, the Australian was in a great position to stretch out a lead on the opening lap, a feat that was subsequently achieved by Piastri.

“I managed to get a good start and went around Nannini on the first turn, Alex Peroni said. “I don’t know if it was cold tyres or he locked up but unfortunately he touched my right rear which put me out of line for T2 and T3 then Piastri passed me at turn 4. I was off line again and Nannini stuck it down the inside again. Yeh..anyway.. that’s how it is. When I passed for second I was trying to slowly catch up and maybe hope for a mistake, but after the Safety Car, honestly I was planning to try and pass him for the win. I was within that gap and I made a slight mistake into turn 1 and I fell out of the DRS. Anyway our pace was good and pretty happy with the car today.” 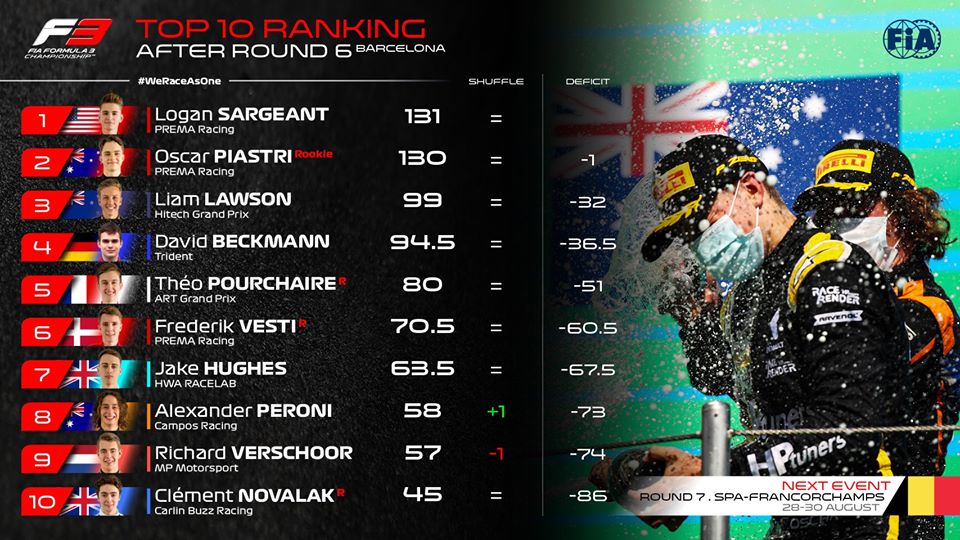 The next round of the FIA Formula 3 Championship takes place at Spa over the last weekend in August.